While most of the nation’s youngest adults say they learn about money from Mom and Dad, they also think high schools should step up for future graduates.

More than three-quarters (76%) of 18- and 19-year-olds say classes about managing finances should be required in high school, according to new research from Experian. And although 74% say they mostly learn about money matters from their parents, just 58% name them as financial role models. Additionally, 51% are afraid money issues will stop them from doing the things they want to do in life.

“The one thing we know that kids are going to have to deal with as adults is money,” said certified financial planner Tom Henske, a partner at New York-based Lenox Advisors. 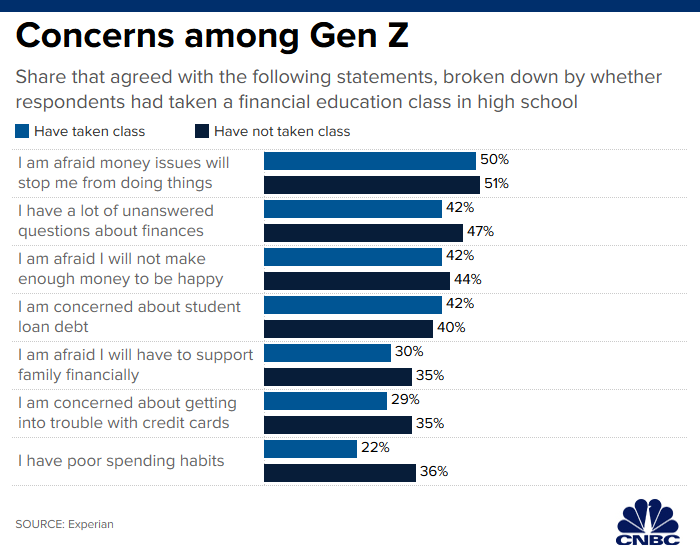 “They’re probably thinking, ‘How could you send me out into the world not being proficient in this very important topic?'” Henske said.

The Experian research was based on a survey that explored the attitudes of 18- and 19-year-olds — members of Generation Z — about a variety of personal finance topics, ranging from how they track their finances (their smartphone, of course) to their financial goals and the topics they want to know more about. Roughly half (52%) of the 545 people surveyed were enrolled in college and the remainder (48%) were not. A majority (64%) had never taken a personal finance class.

Although 45 states include the curriculum in their standards, just 19 require students to take such classes. 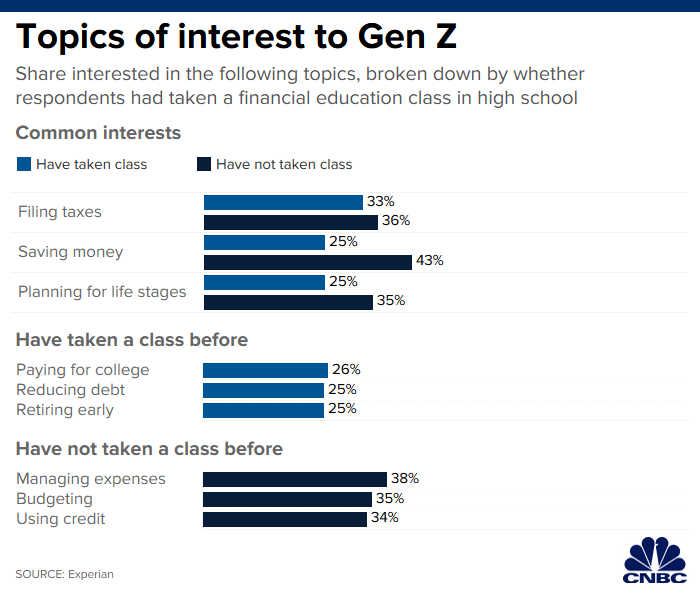 “We want kids to have a good pathway to a fruitful career, but then they arrive in adulthood and we haven’t given them essential tools they’ll need,” said Nan Morrison, CEO of the Council for Economic Education and a member of the CNBC Financial Wellness Council. “The best thing to do is teach them along the way, and schools are the right place for that.”

Parents also can do many things along the way to give their kids even some basic lessons about making choices with money and budgeting, Henske said. One of the simplest options is to give even young children an allowance.

“How do we get them to learn about money if they don’t have money in their hands?” Henske said. “They can make small mistakes along the way, or big mistakes with small amounts, and there are lessons in those experiences.”

At the same, though, 44% of parents are “extremely reluctant” to discuss money with their kids, and 76% of children say their parents sometimes confuse them when talking about money, according to a 2017 T. Rowe Price survey.

There is some evidence that mandating personal finance courses in high school works. Students required to study the topic boasted better credit scores and lower debt delinquency rates as young adults, according to a 2014 study from researchers at the Federal Reserve.

Some other studies have shown little improvement in various aspects of finance, although advocates say the quality of the curriculum matters, as well as whether the person teaching the course has been properly trained to teach it.

More from Invest in You:
Strategies to make sure kids grow up with money smarts
What successful couples know about money that you don’t
What Americans are spending on kids’ allowance

In the Experian survey, many respondents had unanswered questions about personal finance, regardless of whether they took a course in high school.

However, there was a difference in the topics that each group wants to know more about. For example, the 36% who have had a class were most interested in taxes, while the 64% who had no class wanted mostly to know more about how to save money.

Also, 38% of the survey respondents said they find personal finance topics to be somewhat interesting and 11% love learning about them. Another 40% have no strong feelings one way or the other, and the rest agreed with the statement, “They are a snooze and bore me.”