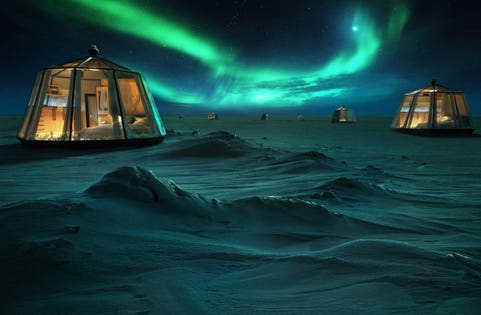 Travelers are taking things to the extremes these days, whether it’s paying $80,000 to stay in a luxury hotel in Antarctica or having a one-of-a-kind hotel built just for them in the remotest parts of the earth. Now, people looking for the ultimate brag factor can check off another destination on their bucket list: the North Pole. With the North Pole Igloos Hotel, intrepid—and deep-pocketed—adventurers can experience the northernmost place on earth for a cool 95,000 euros (about $105,000). Travelers will stay in a pop-up glamping property that is made up of 10 heated-glass igloos. The cost includes a one night stay in the North Pole, as well as two nights in Svalbard, a remote town between Norway and the North Pole, plus transportation, meals and guides.

The one-of-a-kind and completely sustainable property is being built by Luxury Action, which specializes in over-the-top experiences in the Arctic and Nordic region. “Since I opened Octola in December 2018, which is the most exclusive five-star lodge and private wilderness in Arctic regions, many of my guests been asking more and more about the state of arctic nature,” says Luxury Action’s founder and CEO Janne Honkanen. “I thought that this is the time and the opportunity to give a chance for my guests to experience the North Pole with Arctic explorers and scientists in a safe way.”

Champagne at the North Pole.

Jack Ezon, founder and managing partner of Embark, a new luxury lifestyle and travel planning business that appeals to the high-net-worth audience, thinks the property will be a hit among a certain set. “I think it is amazing to give luxury explorers an opportunity to experience one of the last frontiers before it disappears,” says Ezon. “Its price tag will certainly close out most of the market and its rigor will appeal to an even slimmer set, but for those who type-A over achievers who crave the cool and unusual this is amazing.”

Due to the extreme weather conditions in this frozen-over area, currently only about 1,000 people visit the North Pole each year and stay in rugged accommodations. The North Pole Igloos Hotel will be open only during the month of April, since the North Pole is only accessible by helicopter in April and by ship during June and July. ”Depending on weather conditions, Luxury Action will move the glass igloos to the safest places around the Arctic glacier,” says Honkanen. “North Pole Igloos hotel is open at North Pole on request in April only, otherwise it can be set at Svalbard’s glacier. The season at North Pole lasts one month only, because it is the only month when in a year you can travel there in a safe way.”

The rugged setting for the North Pole Igloos.

“This is an example of a priceless experience that a lot of money can buy,” says luxury travel consultant Tiffany Dowd, founder and president of Luxe Social Media. “Given the popularity of luxurious private jet trips around the world or private island resorts at comparable prices, it’s no surprise that there would be demand by a select group of affluent travelers seeking the next exotic destination.”

Some travel experts warn about the impact on the environment. “I think it’s a very interesting opportunity but I hope someone who has that kind of money would also be willing to be responsible to carbon offset a trip like this which would have a massive carbon footprint,” says Shannon Stowell, CEO of the Adventure Travel Trade Association.

But Honkanen insists that his company has the environment’s best interests in mind. “All our guests who have been traveling with us, take concern of the arctic nature and climate crisis,” says Honkanen, who points out that the hotel and its footprint will be completely removed at the end of its short season. “I believe they are also the best messengers for us in order to spread word of how climate change affects our lives in the Arctic, as well as what are the effects on our arctic animals and nature.”

Arriving at the North Pole.

Besides being an example of extreme luxury travel, Ezon says the hotel is also reflective of another big trend in the travel space—glamping. “Glamping has become one of the most popular experiences we sell,” says Ezon. “Clients clamor for pimped out tents whether in Montana or the Serengeti.”

In true glamping tradition, each igloo will have its own toilet, plus a glass ceiling roof and a glass wall that will allow guests to view the Northern Lights. The ultimate goal, according to Honkanen: “To be one with nature.”

Carmakers face a crossroads as they work to fit auto dealers into their EV plans
Chewy’s push into pet telehealth runs into regulatory hurdles, skeptical veterinarians
Rupert Murdoch calls off proposed Fox-News Corp merger
Tax filing season has kicked off. Here’s how to get a faster refund
Know The Times When An IRA Conversion Is Most Likely To Pay Off