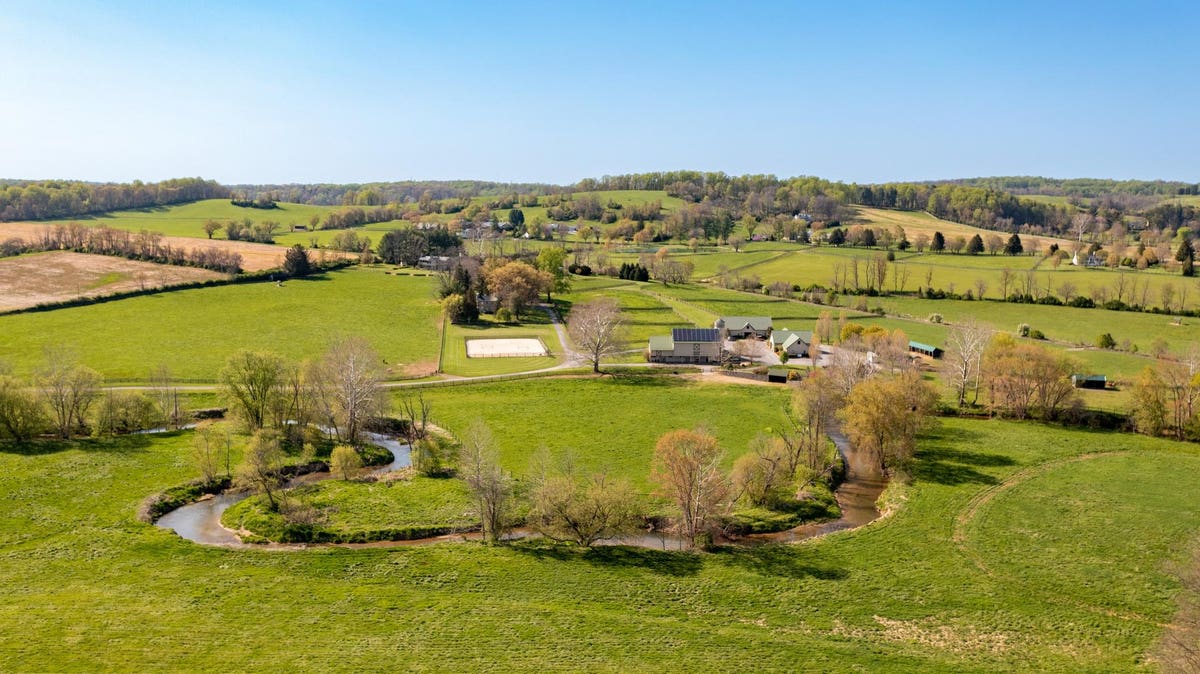 Historic Glyndon is an unincorporated gem in Maryland’s Baltimore County. Part Baltimore suburb and part bucolic countryside, the village itself is filled with Victorian homes and listed in the National Register of Historic Places. The turn-of-the-20th-century community started as a summer resort.

Goose Green Farm encompasses 183 acres of gently rolling land with miles of riding trails and open views of meadows, fields and fenced paddocks. A long stretch of the meandering Western Run flows through the property, which includes swimming holes and hideaways to picnic or fish.

At the heart of the equestrian spread is a two-story stone farmhouse with a front porch and green shutters. A covered terrace has a lounging area and a porch swing.

The roomy kitchen contains an eat-at center island with a cooktop and abundant counter space. A breakfast area with a window nook sits at one end.

Five bedrooms and six bathrooms are within the 8,928 square feet of living space. The second-floor bedrooms open to a deck that wraps one side of the house. The partial basement is heated.

The equestrian farm complex includes a barn with a silo observatory and 11 stalls. One stable has an additional five stalls, another has four. Both have tack rooms and wash stalls. An Amish-built post-and-beam workshop doubles as a tractor shed.

There’s a riding ring, six run-in sheds (where pasturing horses can shelter during storms) and a clay target shooting facility.

The listing agent for 14111 Green Road, Glyndon, Maryland, is Karen Hubble Bisbee of Long & Foster Real Estate. The asking price is US $8.888 million.

Baltimore/Washington International Thurgood Marshall Airport is within 30 miles of the property, which has functioned as a farm for boarding horses.