Moms may want to reevaluate their worth in the household.

While the majority of fathers (78%) and mothers (79%) say their own death would have a “substantial” impact on their family’s quality of life, women cite a lower amount of life insurance needed for the family if they were to pass away, according to new research from Haven Life.

The research was based on a survey of of 385 respondents in a targeted population: married or in a lifelong domestic partnership, with a child (or children) under age 18 living at home, and in the age range of 18 to 55.

The same disparity existed among respondents without life insurance: The amount that men said they’d buy for themselves averaged $355,000. For women, the average was less than half — $175,000.

“Don’t undervalue how much life insurance a parent needs by basing it solely on income,” Burgett said. “A stay-at-home parent might have no income, but if something happened to them, someone else would have to step in to handle child care and the other tasks that the parent did.”

Some household roles tend to be more evenly divided between men and women, including pet care, managing finances and care of elderly family members, according to the survey.

However, others are less evenly split, such as child care and housekeeping (see chart). Either way, if something happens to the parent who handles those roles, the surviving parent would need a way to cover them. 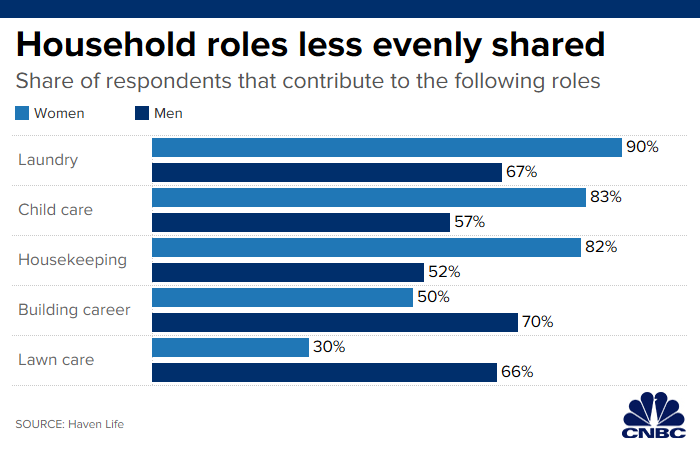 For instance, the cost of center-based care for an infant ranges from about $5,000 annually in Mississippi to north of $23,000 in Washington, D.C., according to a 2018 report from Child Care Aware of America.

Overall, if a stay-at-home parent were paid for the work they do, they’d earn an annual salary of more than $162,000, according to Salary.com.

The survey also showed that a higher share of men (about 19%) than women (8.5%) think stay-at-home moms do not need life insurance.

FCC authorizes SpaceX to provide mobile Starlink internet service to boats, planes and trucks
44% of Americans work a side hustle to make ends meet — but it may not be an efficient way to earn more, says expert
Supreme Court Gives Taxpayers In IRS Collections Cases A Win
How Federal Reserve Savings Accounts Could Help Curb Inflation
Three easy ways to find hidden cameras in hotels and rental homes