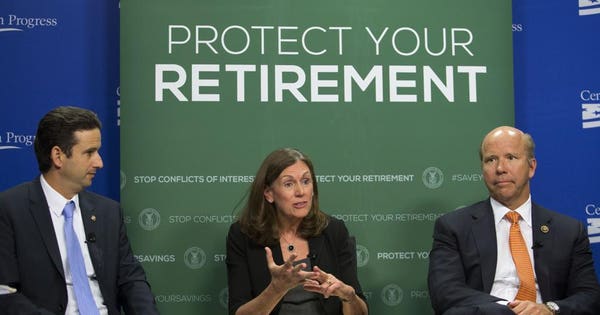 Late last July Jason Zweig and Andrea Fuller reported on the front page of The Wall Street Journal how CFP Board has failed at monitoring certificant listings at their LetsMakeAPlan.Org consumer referral website. Zweig and Fuller found certificants whose disclosure histories appeared clean on CFP Board’s site to have, among other causes for criminal felony charges and other regulatory issues.

Marilyn Mohrman-Gillis, then managing director at Certified Financial Planner Board of Standards Inc., participated in events with Democrat congressmen and the Obama Administration’s Department of Labor to advance the DOL’s “Fiduciary Rule,” which sought to restrict IRA rollovers. Since the Trump administration and before there has been little advocacy from CFP Board to advance access to financial planning.

This isn’t the first time CFP Board has failed to “benefit the public by granting the CFP® certification and upholding it as the recognized standard of excellence for competent and ethical personal financial planning.” In the past CFP Board’s website allowed certificants who clearly held sales licenses to market themselves as “fee-only” (and, even today CFP Board allows advisors to work for firms which falsely call themselves “fee-only” while ignoring that certificants who work for these firms know they are misleading the public).

The response is what I’ve come to expect from CFP Board as political in nature – do not take responsibility, yet still take action. Their reply stated, “In some cases [T]he Wall Street Journal raises important issues, which we are addressing.” A more comprehensive review of what happened should have look not only at the ‘important issues’ that they failed the public and certificants on, but rather their total failure to “uphold [CFP® certification] as the recognized standard of excellence” itself should have been addressed.

Over the last decade under CEO Kevin Keller, CAE, CFP Board has had several other failures, as its leadership moved it starkly away from its core mission toward becoming a much more partisan organization that markets itself as a credentialing firm.

Below are a few examples of this move towards to politicization of personal financial planning at CFP Board:

CFP Board itself seems to promote this negative view of advisors, which I’ve experienced personally as a past volunteer. This article promoting the need for a positive message of advisors was provided to me as one of a few reasons that ended my volunteer tenure that also seemed political in nature.

Investors are more and more given simplistic and “safe” advice, rather than a more complete menu of planning and investment solutions. This increasingly is forcing investors to go it alone rather than secure products that have been vetted through multiple layers of compliance from their advisor.

Imagine a world where people needed accounting help, but the AICPA (which, runs a far more effective marketing campaign for financial planning than CFP Board) would not allow a CPA to prepare a tax return unless the tax savings from having the return prepared was at least 100% of the cost of the return.

Now, imagine that the AICPA creates a liability for the CPA to know such a thing prior to completing the return! This is akin to CFP Board’s standards for advisors who recommend rollovers (but, apparently only those CFP® certificants who work directly with people, not those who work for firms that onboard clients electronically or by other means).

CFP Board’s funding of the 2050 Trailblazers podcast is just one example of this. The name alone refers to a belief that by 2050 whites will no longer be over 50% of the population of the United States. The podcast has episode titles like “Using Your White Privilege,” which is a theory of intersectionality.

Intersectionality is a political movement, and one at odds with the compassion, credibility, knowledge, and fiduciary duties required to be a financial advisor. As CFP Board continues to fund and support political movements they not only lose focus of their mission, some have even suggested they put at risk their status as a 501(c)(3) nonprofit.

As a clearly politically-driven institution, CFP Board’s use of volunteers, their promotion of ‘fiduciary’ rules, and refusal to accept common standards of governance shows it seeks to control, not expand, a profession. We see this in their interest in diversity as a divisive political tool. Rather than advancing diversity in positive ways like removing the worthless requirement that certificants hold a bachelors degree, not imposing vague threats onto advisors who may work with lower balance clients as with their vague rollover “fiduciary” rule, and returning to funding outreach programs rather than intersectionality and political actors.

Financial planning is a creation of the market economy which came about to provide competent advice across several facets of personal finances. Organizations like CFP Board were created around that concept to provide the public with a way to find a credible advisor.

If CFP Board continues on this path of politicizing their certification the public will find the goodwill that financial planners have built will turn to consumers was nothing more than another bait-and-switch actor in personal finance. The reason CFP Board failed and will continue to is that it refuses to commit to fiduciary governance behaviors for itself and to have leadership that is diverse in their ideas and politics, but committed to the stewardship of the quality of their marks and a financial planning profession for the certificants and public good.

And, if that does not change, the future financial advisor may not wish to be a CFP® certificant, but may look to some other way of showing their commitment to sound governance, stewardship and leadership behaviors.

I reached out to CFP Board via email on May 17, and on other occasions, to discuss the issues above and as of this publication have not received a response.