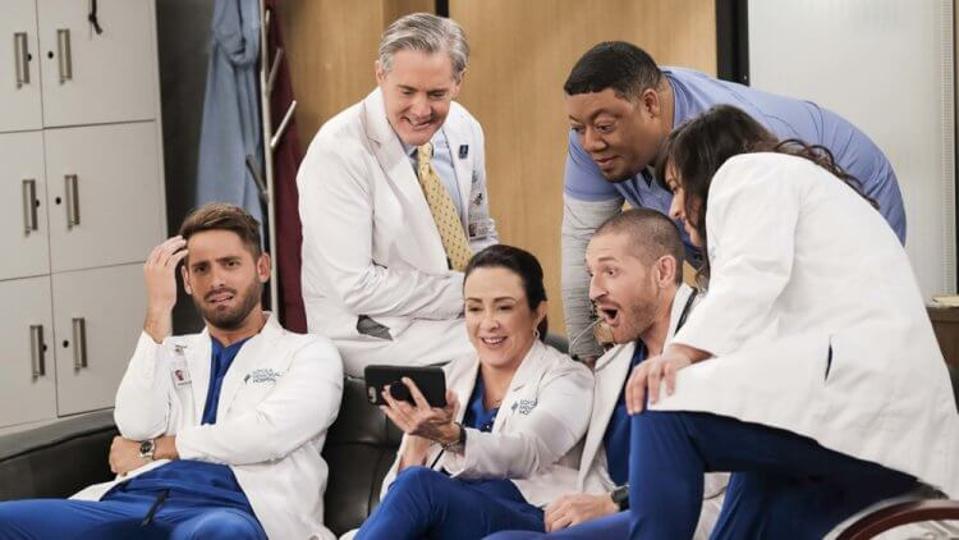 By Randi Mazzella, Next Avenue Contributor

Carol’s Second Act (CBS) with Patricia Heaton (from Everybody Loves Raymond and The Middle) deals with taking on a new career after your kids leave the nest, as well as life after divorce. Perfect Harmony (NBC) with Bradley Whitford (from The West Wing and Get Out) finding something to give your life purpose after the loss of a spouse. And The Unicorn (CBS) with Walton Goggins (from Vice Principals and Justified), revolves around a widower dating for the first time in two decades while raising two adolescent daughters.

Here’s more about each show, what the critics have said about them and what Next Avenue says after watching the pilots:

In Carol’s Second Act (Thursdays 9:30 ET/ 8:30 CT) television veteran Heaton, 61, plays Carol Kenney, a 50-year-old divorced mother who just retired from her job as a high school science teacher. Carol decides to bravely pursue her lifelong dream of becoming a doctor. Surrounded by peers 20 years her junior, she shows that it’s never too late to go after your goals and that younger and older generations can learn from one another.

Heaton and her real-life husband David Hunt are the show’s producers; the creators are Emily Halpern and Sarah Haskins, two twentysomethings who recently wrote and produced the movie comedy Booksmart. Halpern told The Boston Herald, “We loved the idea of an older woman … somebody at a time in her life where she might traditionally be expected to retreat or to become less visible. And we thought, ‘Let’s put her center stage and put her in an environment where her age is actually her strength.'”

Heaton has said she relates to Carol. Although happily married, the actress found herself unsure of her next act after The Middle wrapped. She said: “I was feeling a bit at sea not knowing what I was doing. I’m no longer a full-time mom, and I didn’t have a job as an actress and I very much felt the things that a person like Carol would feel.” And, she told Parade, in the show, “we want to talk about the value of life experience… There’s a calming that happens as you get older and you see how life is playing out.”

What the critics say: Reviews have been tepid; the show has a 54% Critic’s Consensus score on the Rotten Tomatoes site. The New York Times said, “…(the) situations and characters, like the egotistic pretty-boy intern and the domineering but compassionate senior resident, are terminally familiar.” And, that critic said, “There’s also something retrograde, in the first two episodes, about the show’s portrayal of Carol. The age jokes are a given, but they’re accompanied by a tendency to celebrate her not for her medical ability but for the human touch that her age (and, implicitly, her gender) give her.”

What Next Avenue says: I agree with the Times critic. The writers are too focused on Carol’s “motherly” instincts making her a good doctor rather than the perseverance and determination a midlife woman needs to go to med school while taking care of her family. And the word “old” is thrown around far too often. But I love the idea of a woman taking on a challenging career in her second act. If Carol evolves into more of a strong, intelligent, “grown-up,” the show could have potential.

In Perfect Harmony (Thursdays 8:30ET/7:30 CT), Whitford, 59, plays Arthur Cochran, a grumpy former Princeton University music professor forced into retirement after unspecified student complaints. Before the show starts, he has moved to Kentucky because his terminally ill wife Jean wanted to live her last few weeks where she grew up. After his wife dies, Arthur is left grieving both her and the loss of his identity-defining career. When we meet him, he’s about to pop pills ending his life, unless his wife gives him a sign that he should go on.

He gets one. After too much to drink, Arthur walks into a church, passes out and awakens to members of its lousy choir asking him to be their musical director and prepare them for an upcoming competition. He reluctantly agrees.

Arthur is based on show creator Lesley Wake Webster’s grandfather Arthur Wake, a choir director who found himself in rural Kentucky at the end of his own life. The pilot was written by John Hamburg, co-writer of Meet the Parents and Zoolander.

Arthur’s internal struggle will likely be believable to many people in their 50s or 60s wondering: How do you find meaning in your life when you’re no longer someone’s spouse or lost a job that defined your adult life? One way, the show suggests, is to use your honed talents and skills in another capacity — either a new job or through volunteering. Webster told Next Avenue: “Some of my grandfather’s happiest moments were directing a rural chorus, where he got to share his expertise and joy in music.”

Another way older adults can find fulfillment, as Perfect Harmony shows, is by meeting and making connections with new people, especially ones who are younger. Says Webster: “Older people have skills and experience that you can’t learn in a book or from a YouTube video. Bradley Whitford’s character, Arthur, is an example of how an older person can give back to his community… and how an older person might benefit from the optimism of a younger person.”

What the critics say: Reviews of the pilot episode were mixed; the show has a 67% Critics’ Consensus score on Rotten Tomatoes. Melissa Camacho of Common Sense Media liked it, saying, “The funny series offers lots of laughs thanks to a quirky but extremely likable ensemble cast. Granted, Perfect Harmony‘s formula isn’t particularly original, but the writing is sharp and delivers consistently strong, edgy punchlines and some absurdly comical moments. Yet, it also manages to weave in a few sensitive bits, which makes it more appealing.” But The Hollywood Reporter’s Daniel Fienberg was less impressed, saying, “The bigger story has nowhere to go after the pilot, Arthur’s story has only backsliding (into being a curmudgeon.)”

What Next Avenue says: While the show is a comedy, it’s dealing with a serious problem. As the American Foundation for Suicide Prevention notes, middle-age white men represent the highest rate of suicide. I just wish the show handled midlife depression more seriously.

In The Unicorn (Thursdays 8:30 ET/7:30 CT), Goggins, 47, plays Wade Felton, a widowed father of two adolescent daughters. When viewers meet Wade, he has been grieving his late wife for over a year and feeding his family frozen casseroles made by well-meaning neighbors. After encouragement by friends to start dating again, he grudgingly agrees and creates an online profile. To his surprise, he’s a popular “swipe right” on dating sites. His friends attribute the popularity to Wade’s “unicorn” status: he is a nice, single, family guy and not a married cheater, an elusive combination in the world of midlife dating. (That’s also the theme of the new bestselling novel, Fleishman Is In Trouble.)

The Unicorn’s plot is based in part on producer Grady Cooper’s own experience. After 20 years of marriage, Cooper’s wife Jane died when his daughters were tweens. Cooper told Next Avenue, “The hardest part about moving on after being widowed is survivor’s guilt. As the survivor, you want to honor the marriage or relationship you had, but you have to realize that a new relationship can be exciting.”

Although becoming a widower or a widow may not seem like an ideal jumping point for a sitcom, Cooper found laughter to be helpful tool in his healing process and plays it up in the show. He says, “I see life as a series of comedic events peppered with sad moments. I try and not dwell on the sadness. It’s not to say that I don’t miss my wife, but the past is the past and if you don’t move forward, one is stuck.”

Like Wade, Cooper found it hard to fit into the dating world after being married for decades. He says, “My wife’s illness was over a five-year period, so it was a long process, and I dated shortly after her death. It was probably too soon, but I wanted some companionship and wanted to feel normal again.”

The bright side of Cooper’s awkward re-entry into dating is that it gave him plenty of material for The Unicorn. “I went on many first dates. In fact, some dates, I knew from the start were not going to be great. But I was interested in meeting new people,” he says. “The result was that we laughed at how awkward it was, and some of my first dates are still friends.”

Cooper’s advice to new widowers and widows: take it slow. “Give yourself time to grieve and heal. But also, be social. Don’t isolate yourself. Eventually, start to decide what you want your new life to be,” he says.

And his advice to well-meaning friends who want to offer support: “Many widows and widowers exist in a fog for a long time. Check on them daily. Listen. Don’t judge.”

While all help is appreciated, Cooper says, “Bring healthy meals. Comfort food can make you fat, and I had to exercise quite a bit after all the wonderful meals our friends gave us.”

What the critics say: Reviews for The Unicorn have been mostly positive; the show has an impressive 94% Critic’s Consensus score on Rotten Tomatoes. Daniel D’Addario of Variety says of Goggins, “His tentative steps past the first days of parenting alone are made with a certain optimism that’s appealing. The performance anchors what is in its first episodes a thoughtful and sophisticated sitcom about what follows mourning — in other words, the rest of life.”

What Next Avenue says: Goggins, his TV daughters and the supporting cast are believable, as they face a difficult situation with sincerity, hope and humor. I found the pilot enjoyable and am curious to see how the show develops.

Retirees Must Ask These Questions Before Hiring A Financial Professional
Real Estate Buyers Are Not Liars, Agents Just Need To Listen
Millionaire Renters Have Tripled Since 2015
The Fed Is Poised To Hike Interest Rates Again – Is It Enough To Keep Away A Recession?
Op-ed: Salesforce appoints ValueAct’s Morfit to its board and a proxy fight may loom ahead