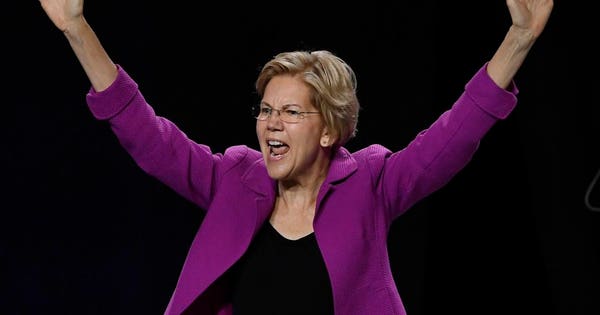 Calvin Johnson’s recent paper A Wealth Tax is Constitutional, 38 ABA Tax Times No. 4 is timely as my senator, Elizabeth Warren’s proposal for a wealth tax of 2% on fortunes over $50 million and 3% on fortunes over $1 billion is attracting a lot of attention.  I don’t know what the source of those percentages is although it does allow Senator Warren to say “two cents” a lot.

The only thing that I can think of is an existing wealth tax of a sort (actually a religious obligation) that is pegged at 2.5% (with a much lower threshold).  That would be zakat, the Third Pillar of Islam.  Zakat is actually enforced by law in some countries.  As you can see from this piece by Adeem Younis, I am not the first person to note this correspondence.  I would have thought that Breitbart would have been all over it.

Whatever else a wealth tax accomplished, it would be a significant transfer from the upper-upper class to the upper-middle class.  I would think that in some of the larger law and accounting firms, there are already people pitching planning techniques to beat the entirely hypothetical tax.

And if it does pass, the resulting regulations will be of mind-numbing complexity.  Just for starters.  What do you do about trusts?  Do trusts pay the tax themselves with beneficiaries allowed to apportion their unused exemption to the trust?  Or is the trust wealth somehow apportioned among the beneficiaries?  However it is done, let the games begin.

And then there is valuation.  Don’t get me started.  And if it is a net wealth tax, what counts as a liability?  Think that is easy.  Read about partnership taxation.

It happens that I am the child of parents who grew up during the depression, which forces me to conclude that whatever else you might think of it, the wealth tax is good because it will give people work.

According to Emanuel Saez and Gabriel Zucman, Senator Warren’s go-to-guys when it comes to economics, the wealth tax should raise over $200 billion per year (There are other estimates floating around.  Regardless, it is a number.)

So imagine the IRS spends a non-trivial sum on collecting $600B over three years and the Supreme Court rules that it has to all be paid back.  That would be a very poor use of time, money and political capital.

The reason that the wealth tax might be unconstitutional is that it might be a “direct tax”.  Direct taxes have to be apportioned to the states based on population.

Representatives and direct Taxes shall be apportioned among the several States which may be included within this Union, according to their respective Numbers, which shall be determined by adding to the whole Number of free Persons, including those bound to Service for a Term of Years, and excluding Indians not taxed, three fifths of all other Persons.

Those “other persons” are nowadays in polite company referred to as “enslaved people”.  The “s” word did not enter the Constitution until there was an amendment banning it.

If the wealth tax is a direct tax, it is not practical as the amount collected would have to be proportionate to state population.

The problem is that nobody seems to have a real clear idea of what a direct tax is.  The only really clear example is “OK everybody throw in a hundred bucks” (a capitation), the way non-anal people will split a dinner check rather than carefully scrutinizing it as to who ordered the salad or the extra beer.  Also, a tax on real estate is probably a direct tax.

There is one really huge Supreme Court decision that did indicate something was a direct tax.   Pollock v. Farmers’ Loan & Trust Co which ruled that:

A tax on the rents or income of real estate is a direct tax within the meaning of that term as used in the Constitution of the United States.

That pretty well killed the income tax until we got the sixteenth amendment.

The Congress shall have power to lay and collect taxes on incomes, from whatever source derived, without apportionment among the several States, and without regard to any census or enumeration.

The Pollock decision may be what creates the most concern about the wealth tax being a direct tax.

Professor Johnson is confident that a wealth tax is not a direct tax and that even a conservative court will not so rule.

The Founders believed in wealth taxes : they considered that they would need taxes on wealth for the common defense in the inevitable next war. Various leaders made this clear. The power to provide for the common defense, one J. Choate told the Massachusetts ratification convention, “can be no other than an unlimited power of taxation, if that defence requires it.” “Wars have now become rather wars of the purse than of the sword,” Oliver Ellsworth told Connecticut. “A government which can command but half its resources is like a man with but one arm to defend himself.” Hamilton put it quite clearly. “A constitution cannot set bounds to a nation’s wants; it ought not, therefore, to set bounds to its resources. Unexpected invasions, long and ruinous wars, may demand all the possible abilities of the country. Shall not your government have power to call these abilities into action? The contingencies of society are not reducible to calculations. They cannot be fixed or bounded, even in imagination.” No hobble that made wealth taxes impossible would have been tolerated at the time, and apportionment, which was only intended to provide a reasonable formula for calculating tax shares when workable, would have been a hobble.

Over time any sort of tax that could not reasonably be apportioned by population was deemed to not be a direct tax, according to Professor Johnson.  I have to say that there seems to be some circular reasoning going on there, but let’s stick with his argument.

He leans heavily on Hylton v United States, which since it was decided in 1796 was decided by judges who you think would have known what the Founders meant.

The Hylton court wisely held that carriage taxes were not direct taxes as a matter of law because apportionment was not reasonable. As Justice Chase put it, “the Constitution evidently contemplated no taxes as direct taxes but only such as Congress could lay in proportion to the census. The rule of apportionment is only to be adopted in such cases where it can reasonably apply.

So if a tax, like the wealth tax, cannot reasonably be apportioned, then it is not a direct tax.

Then comes the Pollock decision in 1895.

In 1895, in Pollock v. Farmers’ Loan & Trust Co., the Supreme Court ruled that a federal tax on income was a direct tax that had to be apportioned, overruling 100 years of wise precedents going back to the Founders. The majority made up a “pseudo-history” and rationale for the apportionment rule, saying that it was designed “to prevent an attack upon accumulated property by mere force of numbers.

Pollock is an ignorant misreading of history and the meaning of the apportionment clause, as discussed in the prior sections to this article. The Founders’ purpose for the apportionment clause was not to protect wealth from the force of mere numbers but rather to apportion a requisition to reach the wealth of the states. Population was considered an appropriate index of wealth. Apportionment was not an individual taxpayer right vis a vis the government, but a means of allocating taxes in a way that could reach that wealth. The rules regarding direct taxation were never intended as an impediment on the taxing power of the United States.

Essentially, in Professor Johnson’s view, Pollock was just wrong.  I guess I just don’t have his confidence that the existing court could not be just as “wrong”.  The long term project of conservatives seems not to just reverse the Great Society, but also the New Deal and the Progressive Era.  Running up to the 1964 election, the Chad Mitchell Trio had a satirical song called Barry’s Boys about young Goldwater supporters – “The bright young men who want to go back to 1910”.   I realize now that that might not have been so much of a joke particularly after reading George Will’s Conservative Sensibility, which I really liked by the way.

Despite Professor Johnson, I have to think that the risk of the wealth tax being declared unconstitutional is not negligible, which makes it a very bad idea.  It is also a bad idea because of the level of complexity it would add.  And finally, it smacks of Russel Long’s comment on the tax philosophy of most people “Don’t tax you.  Don’t tax me. Tax that fellow behind the tree.”

If you are progressive and prosperous, like Senator Warren, you should want to pay more taxes yourself and not expect that you can get Charles Koch or Bill Gates to pick up the tab for everything.

There are a number of changes to the income tax that would hit the 0.1% hard without hazard to the Constitution with negligible direct effect on the non-prosperous.  My favorite is marking marketable securities to market.  We could have an excise tax on publicly traded companies based on their market capitalization. The idea that really intrigues me that I have not seen anywhere else is repealing Section 102 - Gross income does not include the value of property acquired by gift, bequest, devise, or inheritance.  You could couple that with the repeal of the estate and gift tax and probably some sort of lifetime exclusion of a couple million.  That would be a great simplification.

More than anything else, more vigorous enforcement would do a lot.  Let the IRS hire a couple of thousand accountants from the national and large regional firms.  The nerds and dweebs who became accountants because they like accounting and like to see things done right.  The ones who will never become partners because they lack soft skills and have no sales ability.

After decades of lax enforcement, you can be pretty sure that execution has become sloppy on many of the cute ways that companies avoid tax.  Those are the people who can sniff out where the bodies are buried.  Maybe declare an amnesty while they are being readied for the field.  That should bring in a few bucks.

I really think Senator Warren should get a few tax people on her team in coming up with tax proposals.