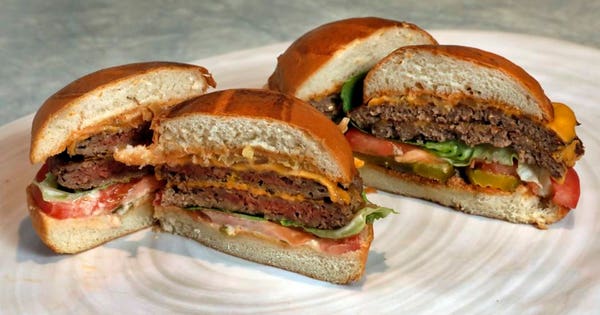 It appears that KFC, Dunkin, and Burger King are joining the trend — Veganism is giving a “healthy” image to fast food chains, as they add plant-based meat alternative products to their menu.

Back in April, Burger King introduced the Impossible Whopper, a plant-based burger, similar to the company’s classic sandwich. A couple of months later, Dunkin’ introduced a plant-based sausage breakfast sandwich made by Beyond Meat.

This week, KFC joined the trend by launching vegan fried chicken, also made by Beyond Meat.

Investors have cheered the move, sending the shares of publicly traded Beyond Meat higher after every announcement.

Why are plant-based meat alternative products suddenly on the fast food menu? Why now? What has changed?

Because they take the meat out of burgers and breakfast sandwich, while they maintain the meat taste, say analysts.  It is this factor, they say, that helps the spread  of veganism beyond true believers.

“Dietary restrictions are not a top reason people are trying plant-based meat alternatives,” says Numerator, a market intelligence firm that tracks the purchasing patterns of 450,000 American consumers. “Health and curiosity are the primary drivers of plant-based meat purchases, though vegans and vegetarians are more likely to be motivated by environmental and ethical concerns. Further, nearly half of meat alternative buyers (48%) have no meat-avoidant members in their household, and only 30% have a vegetarian or vegan in the household.”

Though veganism is spreading and widening, it’s still confined to “high-income, highly educated Millennials of varying ethnicities living in urban areas,” says Numerator. “Plant-based meat alternatives are reaching a broad audience as 93% of buyers purchase these products for themselves, 45% purchase for their spouse or significant other, 28% purchase for children, and 26% purchase for a friend or another adult.”

This trend could accelerate as fast food chains bring plant-based meat alternatives to the masses, and veganism becomes a craze. “With the surging interest in veganism, it’s not surprising to see fast food chains jumping on the trend,”says James McMaster, CEO of Huel. “The drivers influencing consumer choices include greater awareness about health-related issues as well as the environmental impact from high intake of meat and dairy products.”

Lizz Kannenberg, Creative Director of Brand & Story, thinks the time is ripe for fast food chains to ride the vegan and vegetarian trend. “KFC is the latest on a growing list of fast-food restaurant chains to jump at the opportunity to fill a void in the fast-food American diet with meat-substitute options,” says Kannenberg. “Creative Director of Brand & Story. “This makes sense, as vegan and vegetarian lifestyles have been increasing in popularity over the past five years.”

That’s evident from social media conversations. “When looking at conversations around the keyword “vegan” on Twitter, we’ve found a 136% increase in volume between 2014 and 2019,” says Kannenberg. “With more than 11 million Twitter mentions of the word “vegan” in 2019 alone, the fast-food industry seems to have found its next frontier and is ready to deliver on fast-food favorites that anyone can eat.”

While veganism and vegetarianism are changing major fast food chains, they, too, are changing veganism, by helping spread the trend to the masses.

“It’s clear that America’s most beloved fast-food chains were in need of vegetarian and vegan options — the overwhelming interest in KFC’s new Beyond Meat Fried Chicken in Atlanta and across Twitter solidifies this demand,” saysEugene Levin, Chief Strategy and Corporate Development Officer at SEMrush. “This is just the beginning of this trend, as some of the biggest fast-food players have yet to introduce plant-based menu items. But once they do, it will motivate others across the industry to join the plant-based movement to meet this consumer shift.”

Still, Clement Thibault, analyst at financial markets platform Investing.com, warns investors not to get too excited about the veganism craze.

“Appealing to a larger customer base is a good business move, and in theory, everyone wins,” he says. “However, I am worried that investors are getting ahead of themselves by optimistically pricing in growth for both Beyond Meat and fast food chains. We’re still in the initial excitement phase of mainstream vegan products, and while a demand spike for vegan products is nice, sustained growth isn’t guaranteed once the excitement fades. Endorsements from different fast food chains is a great achievement, but it is way too early to pop the champagne on a changed fast food culture.”

Stocks making the biggest moves in the premarket: Apple, Taboola, Biogen and more
Don’t Settle For Someone Else’s Vision: Rewire The Way You Define Retirement Income Planning
Long Covid may be ‘the next public health disaster’ — with a $3.7 trillion economic impact rivaling the Great Recession
Biden’s student debt forgiveness waits on Supreme Court—here’s when borrowers may have to start paying again
Why Texas Remains A Top Offseason Spot For Tax-Savvy Professional Athletes