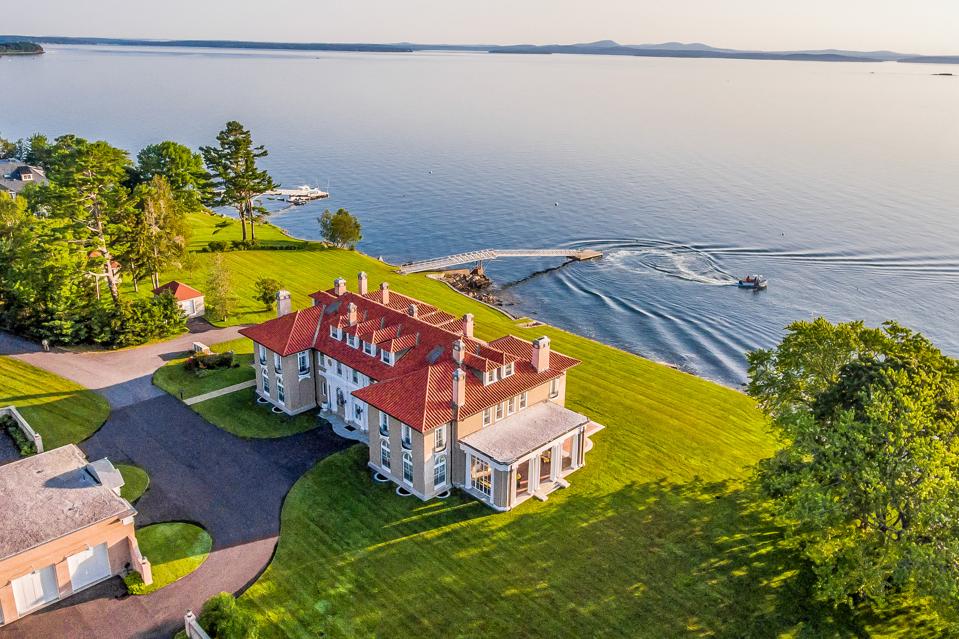 Two exquisite homes owned by the late William B. Ruger, Jr., a member of the family who co-founded firearm manufacturer Sturm, Ruger & Company, Inc., are being auctioned September 7, 2019, with no reserve, offering buyers with a rare opportunity to purchase properties with unique grandeur and history.

The first is located in Bar Harbor, Maine, the summer retreat for America’s wealthiest families, including the Pulitzers, Vanderbilts, Rockefellers and Fords. The 15,000-square-foot mansion, called East of Eden, sits on Millionaire Row on Mt. Desert Island.

Built at the turn of the 20th century by famed architect Guy Lowell, Ruger purchased the estate in 2004, and spent the last 14 years of his life returning the home to its original grandeur.

“My brother was always enchanted with Bar Harbor, and when he had the chance to buy this house, he was beside himself and happy to get it,” says Carolyn R. Vogel, Ruger’s sister and the executor of his estate. “It’s one of few houses that were spared in the [Maine fires of 1947]. He restored it in the most careful way.”

Designed in the Beaux Arts and Mediterranean Revival styles, the residence was built at the height of the Gilded Age. Its striking façade is notably capped off with a tile roof.

“A previous owner had ripped off the tiles and put on shingles,” says Vogel. “My brother found the company that made the tiles, ordered them and had them installed.”

Previously offered for $15.5 million, the property is surrounded by nine private acres, with 1,100 feet of water-frontage on Frenchman Bay, offering amazing views of the water and sunrise from the large veranda. Boaters will appreciate the deep-water, floating dock, which is connected to the grounds with a 150-foot illuminated walking bridge. And a waterfront patio provides space for al fresco entertaining for intimate as well as grand-scale events.

Inside the residence, you’ll immediately recognize the opulence of the era in which the estate was designed, with its 14-foot ceilings, oversized fireplaces, large rooms, marble flooring and period touches. Ruger made a point to upgrade the home with 21st-century conveniences, such as a professional-grade kitchen and wine cellar.

“My brother found expert craftsman to do the work,” says Vogel. “Being on water, the huge rooms make you feel like you were floating. The home has beautiful moldings that are all original to house. The house has such luxury.”

“He had it all set up for his own use,” says Vogel. “He went up there as much as he could. His homes were like his pets and he tended to them.”

Ruger added a large motor court in 2008, which is tall enough to store large vehicles, such as RVs. “It’s a garage-mahal,” quips Vogel. “It has room for 10 cars. My brother made it look like a house.”

The second property sits on 110 bucolic acres in Newport, New Hampshire, offering privacy in a serene setting. Previously offered for sale at $3.75 million, the home was built in the 1880s by banking magnate Austin Corbin. The estate was constructed on the site of Corbin’s original childhood home; Corbin demolished the original structure, except for the room in which he was born, and created his new estate around it, according to information from Platinum Luxury Auctions.

Ruger purchased the property in the 1985, and performed extensive renovations, including the addition of modern features, such as a new elevator, air-conditioning units and professional-grade appliances.

Set within protected fields and forests, the property offers unparalleled scenery, bordered by the Sugar River with views of Mt. Sunapee. However, the property is located just minutes from the heart of Newport and two hours from Boston.

“My brother bought it because of our family’s long association with the area, relating to Blue Mountain [Forest Association], an animal preserve hunting club,” says Vogel. “My brother was intrigued by the property’s back story. It was run down when he had a chance to buy it; no one had lived in it since World War 2.”

The main residence is approximately 7,500 square feet. And the grounds include several outbuildings, including a tri-level barn, heated workshops, detached gentleman’s library, and four-bedroom guesthouse currently in use as caretaker’s quarters.

Ruger took down several old barns and buildings on the property that were in bad condition and dangerous.

“He had an obsession to make the property perfect,” says Vogel.

The main home has four bedrooms, and four full and two half baths. Ruger renovated the rooms to reflect the home’s Victorian style, including an impressive great room with a gilded ceiling and reception hall with ornate fireplace.

“He wanted the home to have a big room that would be suitable for a large gathering,” says Vogel. “He really loved that high Victorian herder style and he incorporated that into the great room. It’s quite spectacular and he did not spare any expense getting it perfect. I admired the lengths he went to to get the proper materials and the craftsmen to do it. The floor is a perfect parquet as it would have been in the day. The ceiling is unbelievable—all hand painted and gilt. He lived in this property; it was his primary home.”

Vogel says her brother’s New Hampshire property would be perfect for a horse enthusiast. “Not only does it have a lot of open land, but there are so many opportunities for riding with dirt roads and all kinds of trails,” she says. “If you felt like it, you could ride from one side to another and not get on a tar road.”

Both properties were listed for sale shortly after Ruger passed away in September 2018. Vogel says the decision to put them up for auction was a matter of practicality. “The heirs are our six nieces and nephews, and they all have their own places and lives,” she says. “We’ve had them on the market from the start, and decided to cut to the chase and see how this works.”