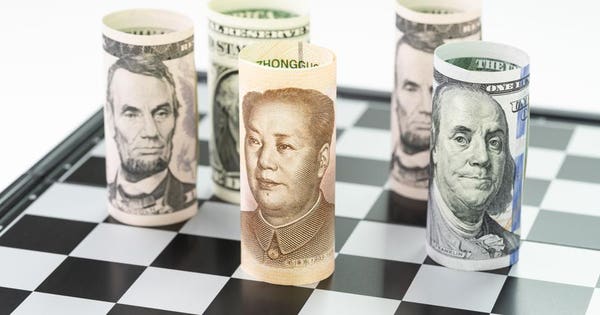 By Uri Dadush and Laurence Kotlikoff

Thirty months into President Trump’s radical trade policy, and as the trade disputes with China <a href=”https://www.reuters.com/article/usa-trade-china/wrapup-7-trump-hits-china-with-more-tariffs-sharply-escalating-trade-dispute-idUSL4N24X4MO”>escalate</a> and risk turning into a currency war, it is time to take stock.

The president promised to sign <a href=”https://thehill.com/opinion/white-house/420023-president-trumps-fight-for-a-better-trade-deal-with-china”>far better trade deals</a>, ensure fair treatment of American firms and <a href=”https://www.npr.org/2019/03/06/700650144/despite-trumps-promises-the-trade-deficit-is-only-getting-wider”>reduce the United States’ trade deficit</a>. Sadly, none of these objectives has been met.

Instead, the policy has created a virulent uncertainty which slows the global economy and undermines the rules-based trading system on which American firms depend.

Here are the facts. As many had predicted, the U.S. trade <a href=”https://www.bea.gov/system/files/2019-08/trad0619_0.pdf”>deficit</a>, which depends more on fiscal than trade policy, is larger than when the President took office. Tariffs are not reducing imports. Tariffs are shifting the source of imports to third parties, such as Vietnam, and increasing their cost for U.S. consumers.

Employment in manufacturing has increased, but it has just kept up with <a href=”https://fred.stlouisfed.org/graph/?g=cAYh”>employment</a> in the rest of the economy. This, too, was not a surprise, since jobs in manufacturing depend far more on automation and tastes than on trade policy.

As for fair treatment of U.S. firms, according to Global Trade Alert, nearly 18 percent of U.S. exports were at risk from tariff increases by other Group of 20 countries last month compared to about 8 percent in 2016. According to the <a href=”https://www.piie.com/blogs/trade-and-investment-policy-watch/trump-has-gotten-china-lower-its-tariffs-just-toward?gclid=Cj0KCQjw-b7qBRDPARIsADVbUbUVpASJAgSqmerRc_8mZY8cT5c959ynIVluamZxm3uGucUMow1r5EYaAguQEALw_wcB”>Peterson Institute</a>, while China’s average tariffs applied to all other WTO members have been cut to 7 percent, those applied to the United States have more than doubled, to 20 percent, and over the last year, China’s imports from the United States have declined by 12 percent but have increased by the same amount from third parties. China appears to intend to buy food for its 1.4 billion people anywhere but the U.S. New compensation schemes for U.S. farmers, who are hit hardest, are <a href=”https://www.npr.org/sections/thesalt/2019/07/25/745280710/economists-say-trump-administration-is-over-paying-farmers-for-trade-losses”>expensive</a>, insufficient and <a href=”https://www.politico.com/story/2019/05/23/trump-farmer-bailout-trade-usda-1459840″>inequitably distributed</a>.

Rather than favor U.S. firms, trade policy has placed most at a disadvantage as the costs of their <a href=”https://knowledge.wharton.upenn.edu/article/u-s-china-tariffs/”>imported inputs has risen</a> and their competitors benefit from deals that do not include them.

What about the vastly more beneficial U.S. trade deals that the president promised? The renegotiated South Korea trade agreement is <a href=”https://www.nytimes.com/2018/09/24/us/politics/south-korea-trump-trade-deal.html”>barely different</a> from the previous one and, if anything, more restrictive. The <a href=”https://www.vox.com/2018/10/3/17930092/usmca-mexico-nafta-trump-trade-deal-explained”>new NAFTA</a>, if ratified, will contain some desirable features such as <a href=”https://www.latimes.com/business/la-fi-trade-agriculture-20181001-story.html”>improved access</a> to Canadian dairy markets, and features inherited from the TPP such as tighter disciplines on >a href=”https://www.lexology.com/library/detail.aspx?g=28168fab-60f9-4982-a41c-080c8be0e82e”>State-Owned Enterprises</a>, but it also includes disruptive ones such as more restrictive <a href=”https://www.brookings.edu/blog/up-front/2018/10/02/5-things-to-know-about-usmca-the-new-nafta/”>rules of origin</a> on automobiles and parts and a sunset clause. A broad range of trade experts have examined the new agreement and concluded that it is only <a href=”https://www.bloomberg.com/graphics/2018-nafta-vs-usmca/?srnd=politics-vp”>marginally</a> different in terms of impact on American firms and consumers.

But perhaps the least noticed and most dangerous aspect of the president’s trade policy for American firms is his <a href=”https://www.politico.com/story/2019/07/26/trump-world-trade-organization-1623192″>hostile treatment</a> of the World Trade Organization (WTO). The U.S. invocation of national security to apply tariffs on steel and aluminum and its threat to do so on automobiles, and its use of <a href=”https://en.wikipedia.org/wiki/Section_301_of_the_Trade_Act_of_1974″>Section 301 of the Trade Act of 1974</a> against China represent clear violations of WTO rules. The U.S. is also <a href=”https://www.reuters.com/article/us-usa-trade-wto/u-s-blocks-wto-judge-reappointment-as-dispute-settlement-crisis-looms-idUSKCN1LC19O”>denying</a>, on dubious grounds, reappointment of the WTO’s Appellate Body judges. That approach has motivated Canada and the European Union to establish an <a href=”https://www.rcinet.ca/en/2019/07/25/canada-and-eu-agree-on-temporary-fix-for-trade-dispute-resolution-body/”>alternative mechanism</a> for dispute settlement between them and to invite other countries to join them. If the WTO’s judicial arm collapses, American firms will no longer be able to count on legally enforced Most Favored Nation treatment.

The administration’s penchant for breaking rules — and thereby creating systemic unpredictability — is evident in last week’s decision to name <a href=”https://www.cnn.com/2019/08/05/business/china-currency-manipulator-donald-trump/index.html”>China a currency manipulator</a>. Under a long-established procedure agreed upon with Congress, that decision requires fulfillment of three criteria: a large bilateral trade surplus with the United States, which China fulfills, running a large current account surplus and <a href=”https://www.brookings.edu/podcast-episode/is-china-really-manipulating-its-currency/”>systematically intervening</a> to hold down the currency, which China is nowhere near meeting.

American firms tend to give the president the benefit of the doubt – that his policies don’t amount to protection for the sake of protection, which the vast majority don’t need and don’t want. They are, after all, the <a href=”https://nbloom.people.stanford.edu/sites/g/files/sbiybj4746/f/adib.pdf”>world’s most productive</a>. Americans hope that the president’s policies will encourage trading partners to reduce subsidies, protect intellectual property and eliminate trade and investment barriers. In China especially, these are big issues that must be addressed.

But China is a world power. It has shown a willingness to engage in serious give and take but does not respond well to threats and ultimatums.

And even should the president’s tactics eventually result in deals with China, the European Union and others, as we hope, will the outcome be enough to compensate for the mounting losses to American firms and consumers? And will the rules-based international trading system, in which American firms have a vital interest, survive the onslaught? Those remain open questions.

<em> Dadush is a former director of international trade at the World Bank. Laurence Kotlikoff is a professor of economics at Boston University</em>.

The Federal Reserve is likely to hike interest rates again. What that means for you
Stocks making the biggest moves after hours: Snap, Electronic Arts, Advanced Micro Devices and more
Am I Too Old To Get Another Dog
Stocks making the biggest moves midday: Carvana, Colgate-Palmolive, Tesla and more
Alec Baldwin charged in ‘Rust’ shooting, prosecutors say he was ‘distracted’ during training