Traders work on the floor at the New York Stock Exchange, August 5, 2019.

Here are the most important things to know about Monday before you hit the door.

The third quarter winds down on Monday, concluding a volatile period of three months on Wall Street. The S&P 500 and the Dow Jones Industrial Average are set to finish the quarter up only slightly, rising 0.6% and 0.8% respectively through Friday’s close but those modest figures do not tell the full story.

The Dow suffered its worst day of the year on Aug. 14 when the yield curve inverted. Big declines were seen throughout the month of August as President Donald Trump escalated his trade war with China.

For the month ahead, investors should be prepared for another bumpy ride as October has historically been the most volatile month, Goldman Sachs warned. 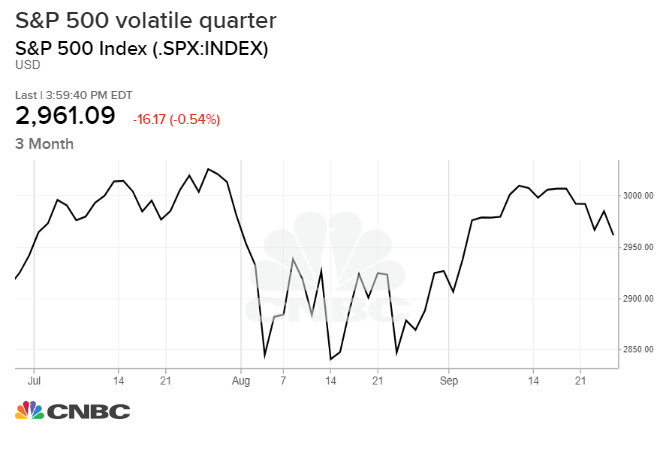 The repo market could face strong demand on Monday as banks pull back on lending to spruce up their balance sheets to closeout the quarter.

The Fed has used overnight and 14-day market operations to stabilize the repo market, used by financial institutions to fund themselves on a short term basis. The Fed was reacting to a sudden spike in rates Sept. 16 and 17, and it is under pressure to permanently resolve the issue, which seems to stem from a cash crunch in the overnight borrowing market, rather than a credit crisis.

There should also be high demand on Monday due to cash needed related to the settlement of $113 billion in Treasurys, auctioned Tuesday, Wednesday and Thursday.

The World Trade Organization is set to approve a U.S. request to impose tariffs on billions of dollars of European goods, which will likely trigger retaliatory measures from the European Union.

Arbitrators from the WTO are meeting at 10.am. local time in Geneva on Monday to finalize a 15-year-old case brought by the United States. The EU is reportedly considering slapping tariffs on more than $4 billion of U.S. exports.

On the U.S.-China trade front, the White House is weighing some curbs on U.S. investments in China to protect U.S. investors from excessive risk due to lack of regulatory supervision. The news, which hit the stock market, came as the U.S. looks for additional levers of influence in trade talks, which resume on Oct. 10 in Washington.

Stocks making the biggest moves premarket: Wayfair, Salesforce, Paypal and more
Bed Bath & Beyond warns it can’t pay down debts, defaults on credit line
‘Avatar: The Way of Water’ is the third James Cameron movie to gross $2 billion
The first ETF is 30 years old this week. It launched a revolution in low-cost investing
Crypto exchange Gemini lays off 10% of workforce in its latest round of cuts