Investing in Latin America’s equity markets can be scary, but Luiz Maria Ribiero has cracked a winning formula.

Ribiero manages the DWS Latin America Equity fund (SLARX), which has been on a tear this year. The fund is up nearly 23% in 2019. The 5-star rated fund has also outperformed its benchmark, the MSCI EM Latin America index, by about 13 percentage points.

The fund’s strong performance comes during a volatile time for Latin American equities. Brazil, Mexico and Argentina — the three biggest markets in Latin America — have faced wild swings amid political and economic uncertainty. Despite all this, Ribiero’s approach to Latin America’s volatile markets has handsomely rewarded the fund’s investors.

“The way we manage the fund, I think is quite different from most of our competitors in the sense we are really bottom-up,” Ribiero said. “We see ourselves as stock pickers and the country allocation is really a consequence of the companies we find at a certain point in time.”

Banco Inter, a commercial bank based in Belo Horizonte, Brazil, is the fund’s biggest holding with a 10.5% portfolio weight. The stock has been on fire this year, surging more than 180%.

The fund also owns Natura Cosmeticos — a cosmetics company in Sao Paulo — and Magazine Luiza, one of the largest retailers in Brazil. The two stocks account for 11.2% of the portfolio’s $325 million in assets under management. Both Natura and Luiza are up more than 50%.

Outside of Brazil, the fund owns MercadoLibre, an e-commerce company based in Argentina. MercadoLibre has a portfolio weight of 5.09% in Ribiero’s fund. The stock has nearly doubled in 2019.

Ribiero said he and his team don’t try to cover everything in Latin America. Instead, they aim for “a very concentrated, high-conviction portfolio.” The DWS Latin America Equity fund owns 46 stocks in total, according to Morningstar.

“Most of the time, what we find is mispriced growth,” he said. “I think we have a different view on the level of growth for those companies and the sustainability of growth for them as well. Due to that, we come up with a different valuation than what the market is pricing in. That’s how we build positions with high convictions.”

Ribiero’s stock picks have had a banner year and have led to strong investor returns. The broader Latin American stock market has been far more turbulent in 2019.

The iShares Latin America 40 exchange-traded fund (ILF) is up nearly 5% this year after jumping around 16% earlier in 2019. The ETF has also had 87 trading days with moves of at least 1%, FactSet data shows. By comparison, the iShares MSCI Emerging Markets ETF (EEM) has posted 57 moves of that magnitude this year. The S&P 500 has also closed up or down at least 1% in 32 occasions year to date. 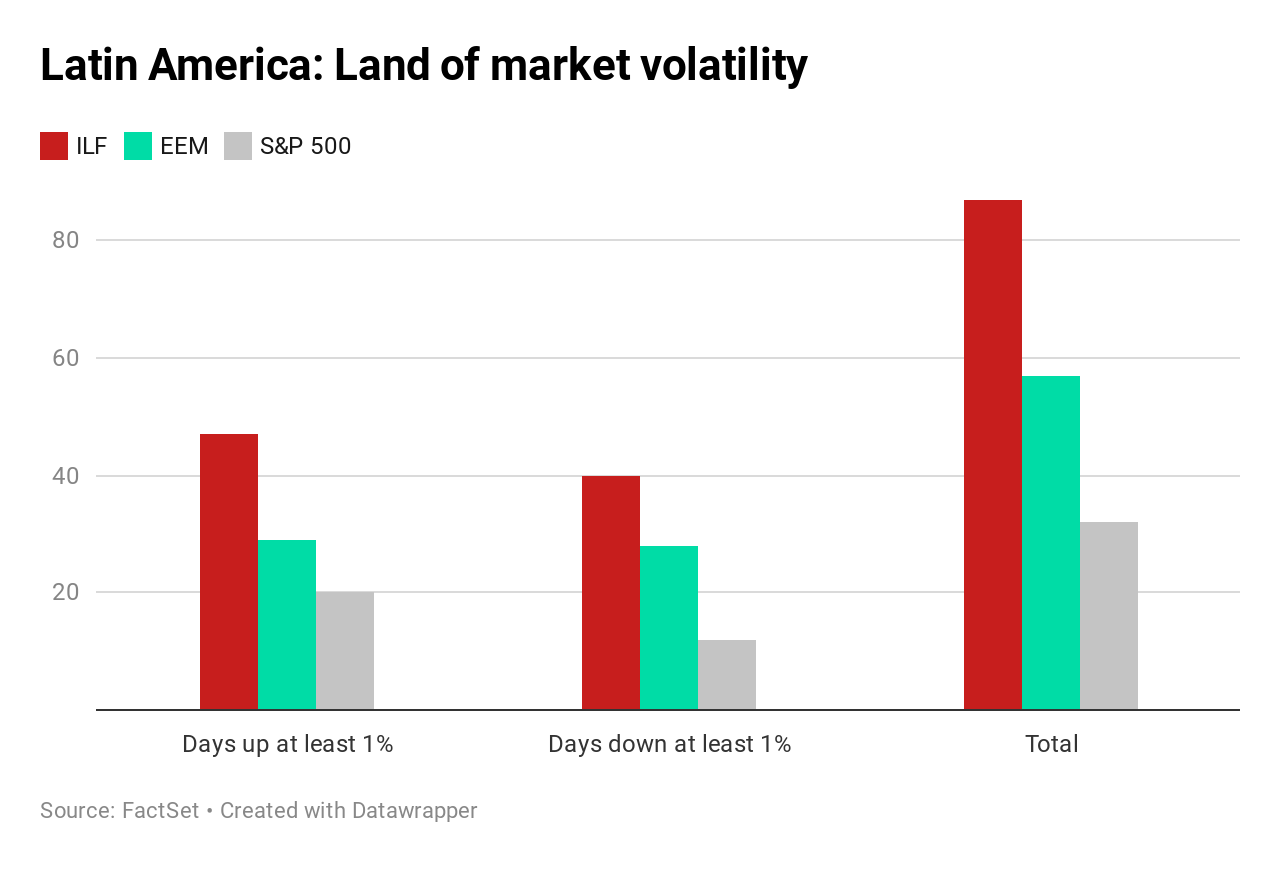 Argentina’s Merval index is down 0.4% for 2019 — after surging as much as 50.3% — following market-friendly President Mauricio Macri’s loss in a primary election in August. The Merval dropped 37% on Aug. 12 following the election. Earlier this month, Argentina imposed currency controls to stem the country’s downward economic spiral.

In Mexico, investors grapple with the new administration’s optimistic growth expectations. Last week, President Andres Manuel Lopez Obrador’s administration sent the Mexican Congress a budget plan that assumes the economy will grow between 1.5% and 2% in 2020. However, Dirk Willer, head of emerging market strategy at Citi Research, thinks this is outlook is too rosy since it assumes a sharp increase in oil production.

Brazil’s stock market has been buffeted with volatility bouts as the country tries to reform its pension system. So far this year, the Bovespa index has posted 69 moves of at least 1%.

“We believe that markets are efficient in the long run, but in the short run they are quite inefficient, especially in a place like Latin America where volatility is sometimes very high,” Ribiero said. “That short-term volatility actually creates opportunity for stock pickers, especially in the region.”