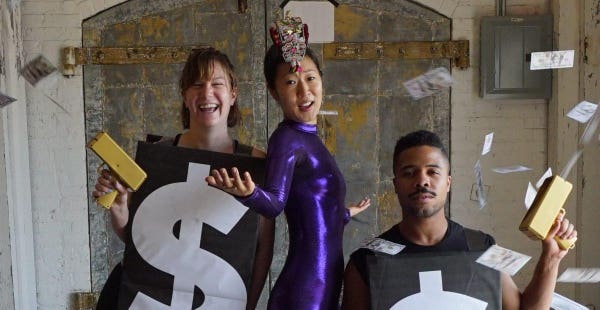 When Caitlin Boston finished paying off $223,000 of student loans, she did something amazing.

She made a music video of herself dancing in a purple catsuit.

Boston, who’s 34, lives in Brooklyn and works in the tech industry, amassed more than a quarter million dollars of federal and private student loan debt from her undergraduate degree at the University of Maryland and a master’s degree at Cambridge. Here’s her story of student loan debt repayment.

Zack Friedman: So, you have all this student loan debt. Did you have a game plan?

Caitlin Boston: My student loans were unfathomably large and the monthly payment was so unwieldy that my initial strategy was to just try and figure out a way to pay the minimum monthly payment while still having enough left over to pay for the rest of my bills without being forced into credit card debt. My first mistake was borrowing that amount of debt without ever having a clear path forward.

Friedman: So, how did you manage student loan repayment in the beginning?

Boston: I cobbled together a series of part-time jobs to complement the paid internship that I was doing at the time where I was making minimum wage and working 60-75 hours per week. I chose to live in a group collective house where we ate vegan, gluten-free, soy-free (i.e., the cheapest parts of the food pyramid) and one of the house chores was to cook a meal for each other one night a week. Sharing housing and food costs with four other people was an essential move on my part and I really could not have managed any other way. I also bought a bike so that I didn’t have to pay for a monthly metro card and wouldn’t feel tempted to try and get a car when I was out late.

The only way that I was able to move from subsistence-level living was by getting a full-time job that gave me benefits and paid me enough to live. I kept one of my part-time jobs because it was remote work that I could do when I finished my day job.

Friedman: You experienced an unexpected, life-changing moment that impacted the way you viewed student loan debt repayment. What was that moment?

Boston: It wasn’t until my father died, in a shocking amount of debt, that I had a real reckoning with myself. We had always commiserated about the loans that we were individually paying off, but when I realized the full extent of his debt, most of which he had kept hidden from our family, that I decided I was going to do everything in my power to become free of debt.

I really made myself shift from a survivalist mindset to one oriented around conquering this animal. So, I decided I needed to get a new career. I spent the better part of two months, every single day, to try and figure out other types of work where I could transfer my skills without having to go back to school. That’s how I was able to hop into tech and what really drove my loan repayment process into a new phase: my “you’ve got to get paid, Caitlin” phase. I didn’t want to get bogged down in penny-pincher strategies when I knew I could just flat out make more money. I mean, let’s get real: What’s the easiest way to eat an elephant? By taking really big freaking boss bites.

The final piece in all of this was talking to my coworkers and other industry peers about what they were earning so that I could figure out how to appropriately anchor my expectations for my own pay.

Friedman: You’ve said your number one expense-saving strategy has been to control your housing costs. What’s your advice to other student loan borrowers?

Boston: If you can figure out your housing, you will be so much further ahead with managing your debt. A lot of people want to live alone, but that’s not realistic if you want to save money and pay down debt. I really hate when people ask me for recommendations for how to pay down their own debt and, after I’ve given them suggestion after suggestion, I find out they’re living alone in a one-bedroom apartment in an expensive housing market. I mean, come on. I have always had a roommate or several housemates. “Should I live alone?” has never been a question I’ve wrestled with. When you have massive debt, you might as well get a paying roommate to help balance it out.

Friedman: What, if anything, was most confusing about the student loan repayment process?

Friedman: You asked one question that helped pay off your student loans faster. What was that one question and how did it change everything for you?

Boston: The over/under question sprung in a moment of desperate improvisation when I was asking one of my male coworkers what he was making for the same job that I was doing (and, arguably, at a higher standard than him). The over/under question works like this: you pitch a high number to a friend or coworker (let’s say $50 an hour), and ask “are you making over or under $50 an hour?” and then, if they say under, you respond with, “well, are you making over or under $40 an hour?” You repeat this process until you can figure out within 8-10% what you could be making. Once I knew I was making thousands of dollars less than him, I knew I needed to get a new job with a company that would be willing to pay me what I was worth.

Friedman: What is your best advice for borrowers who want to pay off their student loans faster?

Boston: My advice to pay off student loans is this:

Friedman: Do you think there are ways to make student loan repayment simpler?

Boston: I think borrowers need to know, upfront, the full cost of their loan before they borrow student loans. That includes providing the salary and wage minimum needed at the time of graduation to pay that debt off in a reasonable amount of time, including the expected monthly payment. Then, once a borrower is able to make an educated choice about taking on any amount of debt, there needs to be one single, centralized, public and transparent system that helps you make decisions about things such as forbearances, deferments, consolidation and refinancing your student loans.

Friedman: You decided to celebrate paying off your loans in an amazing way: you made a video that later went viral. Why did you make a video?

Boston: I celebrated paying off my student loan by making a dance video that details some of my debt repayment story and how I used the over/under question to get myself out of debt. The dancing was essential because it was a celebratory moment relatively unchoreographed because I wanted to show how you don’t need to be a professional dancer to dance. You can just dance because you like dancing and that’s ok!

I decided to wear a purple catsuit because catsuits are the truth in clothing form. I wore a jukburi, a Korean crown, because I wanted to reclaim a Korean accessory that’s only ever really associated with women getting married so that other Korean women could see that they could rock one to just celebrate themselves and their own accomplishments. My friends were there because I wanted to honor them in it since so many of them had offered me comfort or solace over the years. I really wouldn’t have survived this process without them.

I had just spent 10 years feeling like everything had been taken from me – my choices, my father, my health – and I just really wanted to make something to give back. This video reflects how I want to spend the next 10 years of my life: joy, abundance and generosity.