A handful of retailers are on sale.

Ralph Lauren, Nordstrom, Victoria’s Secret parent L Brands, and Urban Outfitters are trading at their lowest forward multiples in around a decade. That low valuation pushed Atlantic Equities to get bullish on Ralph Lauren on Tuesday.

All have underperformed the market this year with double-digit losses across all four. Nordstrom has been beaten down the worst, falling more than 30%.

“It’s obviously a long-term downtrend for most retailers so that disadvantages them relative to the broader market, which of course is in a long-term uptrend,” Fairlead Strategies founder Katie Stockton said. “I always believe in trend following, so generally speaking, I would avoid stocks that are in long-term downtrends.”

However, Stockton adds that occasionally a stock in a downtrend can present a counter-trend opportunity with an oversold condition and momentum working to give some relief.

“I would take a look at Nordstrom and also Urban Outfitters. Both have small short-term basing phases in place, look on the verge of advancing from those basing phases,” she said Tuesday on CNBC’s “Trading Nation.”

Nordstrom and Urban have seen gains this quarter, while the XRT retail ETF has fallen more than 1%.

“I would highlight Urban especially as having a higher low relative to a couple years ago, which makes it a bit more promising than Nordstrom having made a lower low relative to that 2016 low,” said Stockton. “Urban Outfitters does have the potential for a more long-term reversal here. We just need to see a little bit of follow through.” 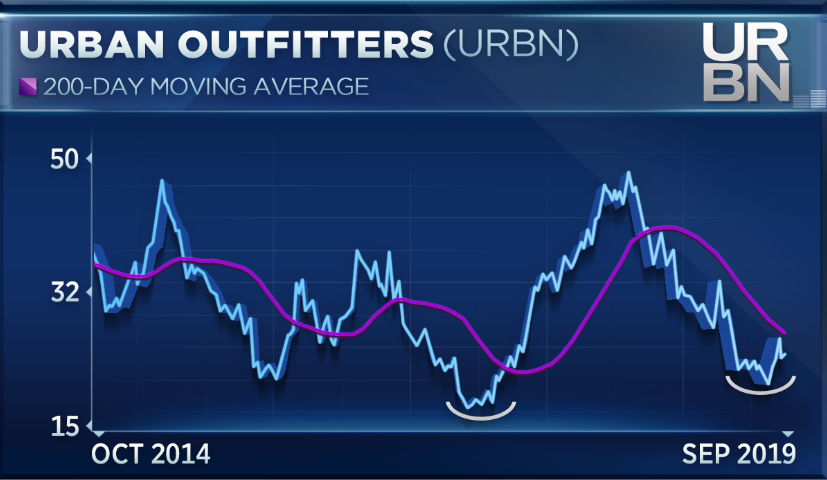 “We’re cautious on the space. A lot of these companies loaded up on inventories prior to the tariff wars and the trade wars, and I think they’re getting stuck with how do they sell it?” Bapis said in the same interview. “We don’t think they’re primed for a return anytime soon.”

Retail stocks, in general, have borne the brunt of the U.S.-China trade war. The XRT ETF, which holds Amazon alongside department stores such as Macy’s and Kohl’s, has added 2% this year versus the S&P 500’s 18% increase.