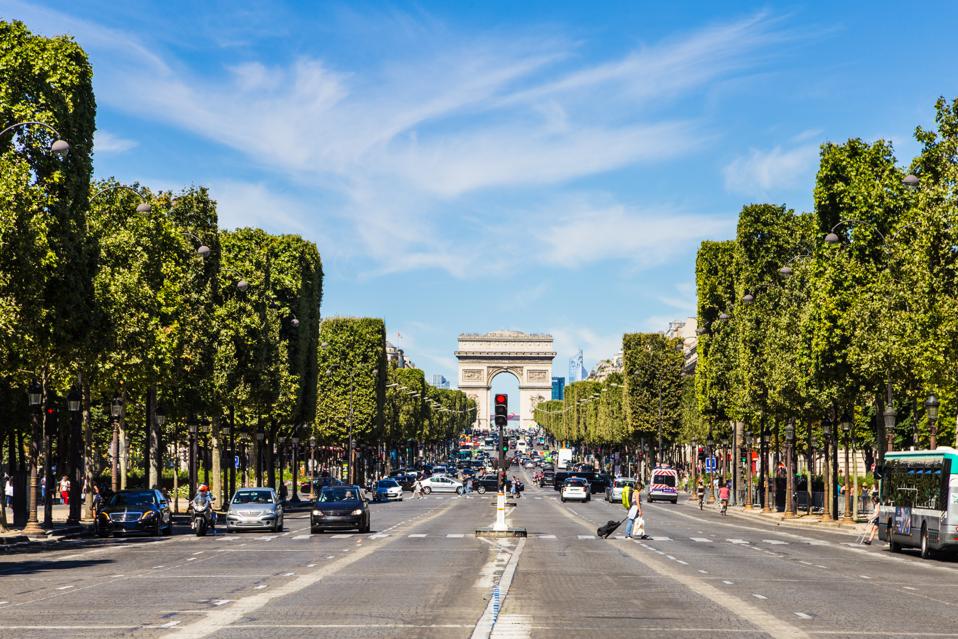 It’s a new record price for real estate in what’s known as “the most beautiful avenue in the world:” A building located at 79, avenue des Champs Elysées, with an area estimated at 7,700 square meters (83,000 square feet), was sold for €613 million to house the headquarters of the European and French staffs of Nike, the American sports equipment supplier, and includes 4,300 square meters (46,000 square feet) of retail space.

The price paid for the soon-to-be Nike European headquarters beats the €600 million paid by Apple for 114 avenue des Champs-Elysées for one of its flagship stores and is equivalent to a staggering €80,000 per square meter.

Real estate prices in Paris “have tripled in value over the past two decades,” according to Le Point. “In fact, the threshold of €11,000 per square meter, on average, is even now crossed in the six most expensive districts of Paris (3rd, 4th, 5th, 6th, 7th, 16th).”

“The strategic location at a very visible angle on the most valued segment of the most visited avenue in Europe (100 million visitors a year) justifies its high valuation,” explained the mutual insurance group Groupama that sold the building to the Norwegian sovereign wealth fund Norges Bank Investment Management, and confirmed the transaction on Thursday.

The building which is branded as “historic heritage” has just gone through a five-year renovation and will be Nike’s third “House of Innovation,” following those in Shanghai and New York.

“The American sports brand will install its “Nike temple” on the ground floor adorned with a majestic double Chambord staircase, registered with the Historical Monuments,” explains Le Parisien. “This store will offer 4,300 m2 of retail space spread over five floors capped by a rooftop with incredible views of the Champs and all of Paris.”

The opening is scheduled for December 2019.

The Nike real estate negotiation is part of the Champs-Elysées 2024 program, an effort by the City of Lights to revamp its most famous avenue that last saw a major renovation more than 20 years ago.

International and luxury brands are back on the prestigious avenue that has been struggling to reinvent itself. “Green rooftops. A cinema of the future. Spectacular flagship stores. Design fountains. Original concept stores. Bike roads. The renewal of the Champs-Elysées is in progress,” writes Le Parisien. “Investors have embarked on titanic rehabilitation operations to bring their Haussmann buildings up to international standards,” the magazine explains in an article on the different projects that are underway on the mythical avenue.

“Hundreds of millions of dollars are flowing into construction projects on the avenue, one of the most visited areas of the city,” writes the New York Times, “as it tries to re-establish and redefine its place.”

Along with Apple, WeWork has also moved there recently as well as Galeries Lafayette, the world renown department store which recently inaugurated its “dream come true” space.

The building at 52–60 avenue des Champs-Elysées, bought originally in 1927 by Théophile Bader, cofounder of the retail emporium Galeries Lafayette, with a view to building a new store there, had to wait 92 years to become a reality.

The Fed Is Poised To Hike Interest Rates Again – Is It Enough To Keep Away A Recession?
Wait until age 70 to claim Social Security: ‘The return on being patient is huge,’ says economist
Bond king Jeffrey Gundlach says he expects one more Fed rate hike
A Limited Return Of The Stretch IRA? – SECURE 2.0’s New Surviving Spouse Rule
Jim Chanos: Bear market is doing something unheard of in my career