When it comes to the forecast for the markets and your investments, there’s good news and bad news.

First, the bad news: The S&P 500 may not climb any higher in the last months of this year, according to Bank of America Merrill Lynch.

That’s as the latest market rout has brought the index down to about 2,900, the year-end target the firm had previously predicted.

How well the market has done this year depends on how you look at it. Since the lows of December, the market is up more than 16%, according to the firm. But from September 2018 to September 2019, earnings and performance are actually flat. 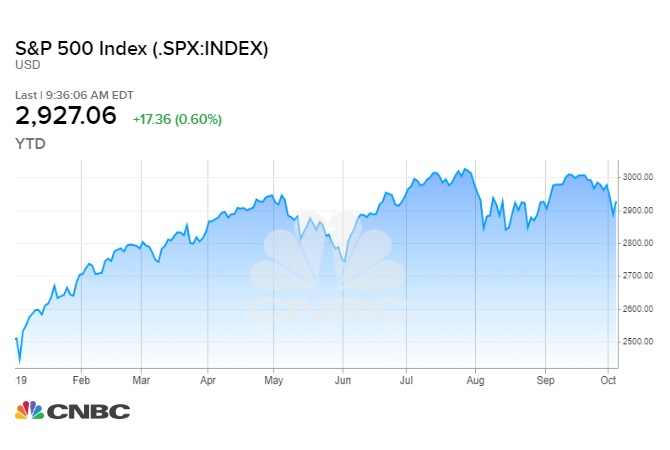 But there is also good news. “We don’t expect a recession, given the information we have today,” said Chris Hyzy, chief investment officer at Merrill and Bank of America Private Bank.

After breathing a sigh of relief that a downturn isn’t coming, investors would be wise to keep an eye on four other forces that could shape the economy and markets, according to Hyzy.

That includes any monetary policy adjustments from the Federal Reserve, trade negotiations between the U.S. and China, earnings growth and overall investor sentiment.

Look for opportunities in stocks

One way for individual investors to stay ahead of those changes is to keep a long view, Hyzy said. “Think about the next 12 to 24 months, not the next three months,” he said.

Bank of America is expecting about 6% earnings growth on the S&P 500 next year. That should make way for attractive returns when it comes to equities relative to fixed income, Hyzy said.

Weekly advice on managing your money

Get this delivered to your inbox, and more info about about our products and services.
By signing up for newsletters, you are agreeing to our Terms of Use and Privacy Policy.

So when days like Wednesday hit, where the Dow Jones Industrial Average fell 1.86% and the S&P 500 dropped 1.79%, investors should see that as an opportunity to rebalance their portfolios and potentially increase their allocations to equities versus fixed income, Hyzy said.

“They should use this as an opportunity to reset portfolios, particularly for the investor who has been waiting for better prices,” Hyzy said.

When it comes to equities, the key word for 2020 is diversification, he said. That includes a mix of growth and value, as well as cyclical and defensive stocks.

Watch your exposure to fixed income

In this environment, some so-called safe assets could be exposing you to more risk than you realize, noted financial advisor Scott Hanson, co-CEO of Allworth Financial.

“A portfolio of fixed income that is designed to be the more conservative piece of [your] portfolio might actually be riskier than the stocks that [you] own,” Hanson said.

If you own bonds that mature five, 10 or more years out, you may want to question whether you have the right kind of holdings.

The biggest thing we focus on, particularly in volatile markets, is if there are cash needs, to make sure cash is available.

Whether or not they’re a fit depends on what happens with interest rates, Hanson said. “Rates don’t have to rise that much to have a negative return on a portfolio,” he said.

Also pay attention to the risk you’re taking on, particularly if you have lowered the quality of credit you’re invested in as you hunt for better yields, he said.

Re-evaluate keeping cash on the side

When stocks hit a low, that’s an excellent time to put cash you’ve had on the side in the market.

But that’s as long as you are not robbing your emergency fund or investing money you may need for more short-term goals.

“The biggest thing we focus on, particularly in volatile markets, is if there are cash needs, to make sure cash is available,” said Diahann W. Lassus, president of Lassus Wherley, a subsidiary of Peapack Gladstone Bank.

Will Congress Restore The Tax Incentive For Research Spending?
Consumers lay out $1,600 yearly for health-care products that flexible spending accounts could have covered
When Mark Cuban bought the Dallas Mavericks, he refused an office or big desk—here’s why
In Defense Of Brutalism
Iger announces first big moves in new tenure as Disney CEO: Restructuring and departure of Chapek right hand Kareem Daniel