Stocks will look to build on their strong recent momentum and reclaim their record highs next week amid a slew of economic data while trade war fears decrease.

The S&P 500 is about 2% from an intraday record reached on July 26 after notching back-to-back weekly gains. The broad index is up 1.8% this past week after surging 2.8% in the last week of August.

Wall Street’s move toward all-time highs comes as recent U.S. economic data suggests a recession may not be in the cards, and the Federal Reserve is expected to cut interest rates later this month. Easing fears around the U.S.-China trade war are also lifting investor sentiment. If the data remains solid, Fed rate-cut expectations stay high and U.S.-China trade tensions lower, the market could climb back to all-time highs. 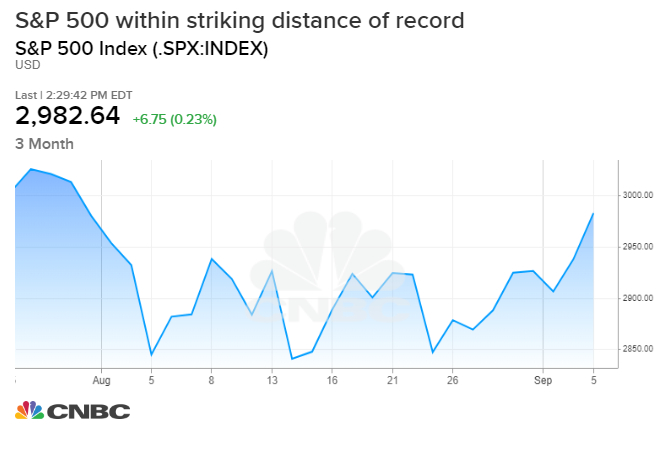 The U.S. services sector grew at a faster rate than expected in August, the Institute for Supply Management said Thursday. The data offset worries from the manufacturing sector. ISM said Tuesday the U.S. manufacturing sector contracted for the first time since early 2016.

“The U.S. economy should avoid recession,” Gus Faucher, chief economist at PNC, wrote in a note. “With slower, but still-solid job gains and good wage growth, households will continue to spend; consumer spending accounts for almost 70 percent of the U.S. economy.”

Investors will get more information on the state of the consumer next Friday with the release of August retail sales and a preliminary look at September consumer sentiment. Positive data on that front could lift stocks to their records.

Next week will be important as investors get more clues about the Federal Reserve’s next policy move. August readings for the producer and consumer price indexes are scheduled for release Wednesday and Thursday.

The Fed has cited persistently low inflation as one of the reasons for easing monetary policy in the U.S. In July, the Fed cut rates by 25 basis points. Market expectations for another quarter-point rate trim in September are at 93.5%, according to the CME Group’s FedWatch tool.

However, stronger-than-expected inflation could raise questions about whether the Fed will trim rates later this month.

“Anything that is speaking directly to inflation is going to be most important” for the market, said James Masserio, co-head of equities in the Americas at Societe Generale. “That’s going to be weighted most heavily in the central bank’s monetary policy decision-making process.”

“Right now, all asset classes are being greatly influenced by the expectations of changes in monetary policy,” Masserio said.

The Fed is not slated to meet until the week of Sept. 17, but the European Central Bank will announce its latest monetary policy decision on Thursday. The ECB is largely expected to cut rates with some experts forecasting a restart to its quantitative easing program.

News around U.S.-China trade talks will continue to play a role in the market next week as investors look for signs of progress in the negotiations. On Thursday, China’s ministry of commerce said Chinese trade officials will meet their U.S. counterparts in Washington next month.

“If there’s a bit more optimism around trade, I think we could get back to those previous highs,” said Jon Adams, senior investment strategist at BMO Global Asset Management. “We’re not far from the previous highs. It wouldn’t take much to get there.”