A trader works on the floor of the New York Stock Exchange (NYSE) in New York.

It might be time to buy into small-cap stocks even though they are lagging their large-cap counterparts, some strategists say.

The Russell 2000 — which tracks small-cap stocks — has dropped more than 9% over the past year. The S&P 500 — Wall Street’s preferred index for large-cap stocks — is up slightly over that time period.

This gap has brought small-cap valuations to their most attractive levels in years relative to large caps, presenting investors with a big buying opportunity for the long haul. Small caps also tend to outperform large caps when the Fed cuts rates. On top of that, small-cap companies are generally less affected by global trade conditions given their businesses are more domestically driven than large caps.

“Valuations have limited short-term predictive power, but matter more over the long-term,” Jill Carey Hall, senior U.S. equity strategist at Bank of America Merrill Lynch, said in a note. “The relative P/E today suggests that small caps should lead large caps over the next decade.”

Valuations for small-cap stocks are at their most attractive levels since June 2003 relative to large caps, according to data compiled by Jefferies. Historically, small caps have outperformed large caps by an average of 6% over the following year when the valuation gap widens that much.

Small caps do tend to carry more risk, but they should over time reward investors for taking that risk, meaning they normally outperform over long periods of time.

Small caps also have something else going for them: The Fed is currently in easing mode.

The Fed has cut rates twice this year and is expected to lower them a third time at the end of October. Market expectations for an October rate cut are at 85%, according to the CME Group’s FedWatch tool.

Historically, small caps have outperformed large caps when the U.S. central bank is lowering rates. Small caps average a 12-month return of 27.9% after the Fed embarks on an easing cycle, Jefferies data shows. Large caps, meanwhile, average a gain of nearly 15% in that time. 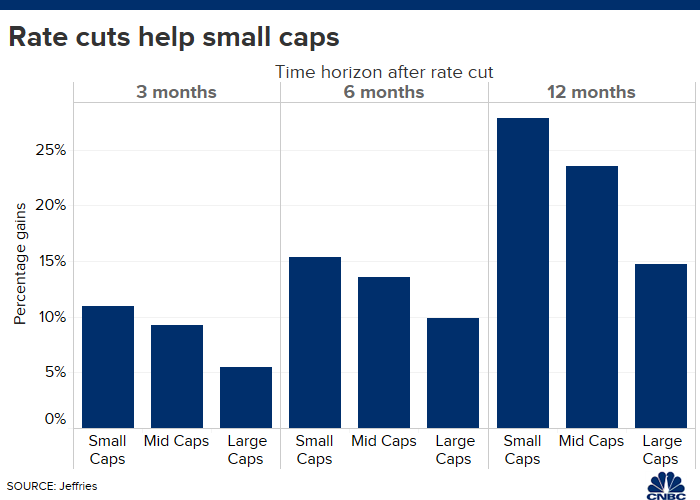 Another reason to consider investing in small caps is the ongoing trade war between China and the U.S. The world’s largest economies have slapped tariffs on billions of dollars worth of their goods over the past year, stoking fears around corporate earnings growth, especially for large-cap companies.

Large-cap companies largely have greater earnings and revenue exposure to overseas markets and are more vulnerable to tighter trade conditions. Small caps, on the other hand, do the lo of their business within the U.S. and thus are less susceptible to the ongoing trade war.

To be sure, investing in small caps comes with its share of risks.

For starters, small-cap stocks tend to be far more volatile and unpredictable than large caps. The Russell 2000 has posted 65 moves of at least 1% this year, nearly double that of the S&P 500.

“Risk-wise, you have to be a bit more careful,” said Thorne Perkin, president at Papamarkou Wellner Asset Management. “In small caps, you have to really understand company operations and their competitive environments.”

Small-cap stocks could also take a bigger hit than large caps if the U.S. economy falters. Hard U.S. economic data, including unemployment and retails sales, indicate the economy is solid. Soft economic data, which include economic surveys and sentiment readings, are pointing to a slowdown, however.

U.S. manufacturing activity contracted to its lowest level in more than a decade last month, according to the Institute for Supply Management. ISM also said last week the U.S. services sector grew at its slowest pace in more than three years. Meanwhile, a near-record number of consumers said in a survey they were worried about the U.S.-China trade war.

But Eric Marshall, president at Hodges Capital, thinks the risk is worth taking for investors. “Small caps do tend to carry more risk, but they should over time reward investors for taking that risk, meaning they normally outperform over long periods of time.”