Pivotal Research Group began coverage of Roku with a sell rating on Friday, saying it sees the over-the-top (OTT) streaming company’s stock falling 55% because it looks “overvalued despite the recent pullback.”

“We see dramatically more competition emerging that will likely drive the cost of OTT devices to zero and put material pressure on advertising revenue,” Pivotal analyst Jeffrey Wlodarczak said in a note to investors.

“Everyone has realized the living room is too important and the big boys … with massive leverage are likely to make ROKU growth much more difficult,” Wlodarczak added.

After running up over 330% this year, Roku shares have cooled in September, falling about 11%. 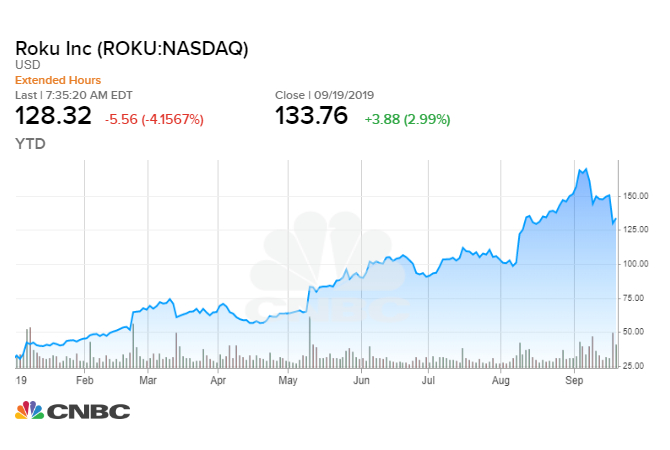 Wlodarczak noted that Roku “deserves a lot of credit” for building its business and getting its devices into about 31 million households, with the majority in the U.S. The analyst added that Roku did that in spite of facing competition directly from Amazon, Apple, Google-parent Alphabet and even Facebook. The latter technology giant announced on Wednesday that it would begin offering a new device, Portal TV, that can TV shows.

“The problem going forward, however, is that while the large Internet players have realized the importance of control of the mostly video pipe into the living room, now the players that actually control the dominant data pipe into the household in the U.S. (Comcast, Charter, Altice) have as well,” Wlodarczak said.

Disclosure: Comcast is the owner of NBCUniversal, parent company of CNBC and CNBC.com.