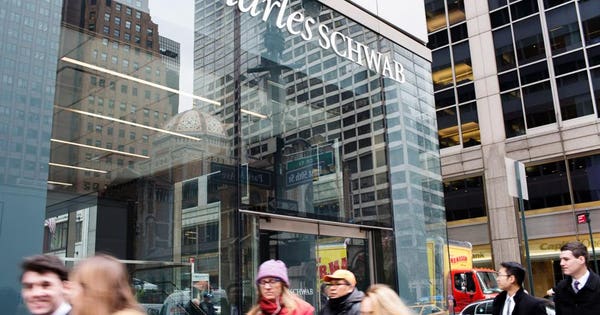 Pedestrians pass in front of a Charles Schwab office building in New York on in January. Schwab just released a report on the use of advisors in retirement plans. Photographer: Gabriella Angotti-Jones/Bloomberg

Most retirement plans, such as 401(k)s, typically lock you into a plan that offers a small selection of mutual funds for the participants to invest in.

However, more retirement plans are letting participants have a brokerage account within the plan. This allows investors to invest outside the plan’s investment offerings, and put their money into any mutual fund, exchange-traded fund, stock or bond they choose.

Somewhat surprising was that the Gen X generation represented the majority of advised accounts, with 43.9%. One would have guessed that Baby Boomers used advisors the most, but in fact they came in second, with 43%. Not surprising, was that Millennials made up just 9.7% of the advised accounts.

In non-advised accounts, participants allocated one-third of their portfolios to equities. Apple (AAPL) and Amazon (AMZN) represent nearly 17% of their equity allocation. The other top stocks purchased by participants include Berkshire Hathaway (BRK.A, BRK.B), Microsoft (MSFT), Facebook (FB), Visa (V) and Alphabet (GOOG), the parent company of Google, accord to the report.

Mutual funds were the second most-used asset class, representing approximately 32% of participant assets. The remaining assets were held as cash, ETFs or bonds.

Meanwhile, in advised accounts, the investment vehicle of choice was the mutual fund, which held approximately 50% of participant assets. ETFs were the second-largest allocation, followed by equities, cash and fixed income.

The report also said that from the first to second quarters of this year the average SDBA account balance grew 3.3% to $276,547, and jumped 12.3% from the year-ago quarter.

Another surprise was which accounts made more trades. Advised accounts averaged 9.8 trades in the second quarter, compared with 5.7 trades by non-advised participants. Overall trading volume was very similar to last quarter and last year.

Schwab is a financial services company that offers 401(k) plans, mutual funds, ETFs and one of the largest platforms for low-commission trading. So, one needs to be aware the data comes from the approximately 142,000 retirement plan participants who currently have balances between $5,000 and $10 million in their Schwab Personal Choice Retirement Accounts. Hence, the majority of assets in Schwab funds.