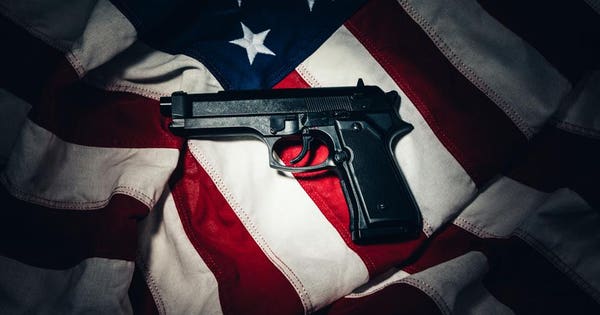 The United States is one of the 20 most dangerous places to live in the world, and critics blame much of it on gun-related crime.

Gun violence regularly tops the news in the United States, and the impact is far-reaching , according to a new survey from InterNations, a global community and information site for people who live and work abroad. The United States is considered one of the 20 most dangerous places to live on the planet.

The results are part of InterNations’s latest Expat Insider Survey, a comprehensive report on what it’s like to live and work abroad in 64 countries around the world. For the 2019 survey, InterNations polled 20,259 expats representing 182 nationalities and living in 187 countries or territories, covering topics such as quality of life, cost of living, personal finance and more. In the Safety & Security subcategory, respondents rated three factors including peacefulness, personal safety and political stability. The results were compiled to create a ranking of the most dangerous places to live. Compare these to the 2018 results of the most dangerous places to live.

READ MORE: “17 Things You Should Never Do In Europe”

Topping the list of the most dangerous places to live is Brazil, with South Africa coming in as the second-worst place, followed by Nigeria. “Brazil, South Africa and Nigeria—the bottom three countries in the Safety & Security subcategory—are also the three worst-rated destinations for personal safety in particular,” says Malte Zeeck, founder and co-CEO of InterNations. ”For example, in South Africa, which ranks 64 out of 64 countries for this factor, 63% of expats say they don’t feel safe, and 22% even feel extremely unsafe.”

The Brazilian police watch over locals and tourists near Copacabana beach in Rio de Janeiro, Brazil.

While the United States ranked 16 on the list of the 20 most dangerous places to live in 2019, it fared better than in 2018, when the country came in at number 13. Zeeck points out that the USA’s ranking has improved, but it has only moved up three spots for personal safety (from 54th in 2018 to 51st in 2019). “Last year, about one in six expats (16%) said they didn’t feel safe in the USA; today, it’s one in seven (14%) expressing the same opinion,” says Zeeck. “So, the respondents’ views have become just slightly more positive.”

And yet, Zeeck says that the overall results are not good for this country and that the USA’s 49th place in the 2019 Safety & Security subcategory is “still not really anything to write home about. A large number of respondents also point at safety factors and current affairs when describing what they do not like about life in the U.S.”

That said, the timing of promoting InterNations’s questionnaires might have impacted the slightly different results, according to Zeeck. “The 2018 survey ran in late February / early March, not too long after the school shooting in Parkland, Florida. This was widely reported about at the time and, as the survey is based on expats’ subjective opinions, it may well have affected how they rated the country at the time.”

However, gun violence still remains a major concern in 2019. “When asked about the aspects of life in the U.S. that they like the least, a substantial number spontaneously gave answers such as ‘lack of gun control’ or ‘violent crime involving guns’ and so on,” says Zeeck. “A Portuguese expat even says that ‘gun culture could be the trigger for me to move out of the country due to safety concerns’—that’s quite a statement.”

The United Kingdom is new to the list of the most dangerous places to live.

One notable newcomer to this year’s list of most dangerous places to live is the United Kingdom, which ranked number 12. “Our Safety & Security subcategory looks at three factors: personal safety, peacefulness and political stability. While the U.K. does not perform well for any of these, it is especially the latter that heavily impacts its results in 2019, causing it to drop from a 49th place out of 68 destinations in 2018 to rank 53rd out of 64 in 2019,” says Zeeck.

Here, we’ve got the list of the 20 most dangerous places to live in 2019, along with comments from some survey respondents. For the rest of the list, as well as the safest countries to live, you can see the complete InterNations survey here.

1. Brazil (ranked 64th overall out of 64 countries). An expat from New Zealand thinks that there is an “underlying feeling of people always living in fear.” A German expat complains that “the high level of inequality and brutality in society is disturbing and makes me feel uncomfortable. Political chaos has caused lots of confusion and discomfort in my workplace.”

2. South Africa (63rd overall). A British expat states: “My life is easier here, but I feel as if I am living in a bubble: I miss the freedom to walk or ride anywhere at any time, and I hate having to worry about my security.” A Belgian expat complains about the “uncertain political situation, racism, corruption and high crime rate, as well as the weakness of the rand.”

3. Nigeria (62nd overall). A Hungarian expat states: “We are not really free, cannot walk on the streets, cannot mingle with the Nigerians. There is always the possibility of danger.” A Rwandan expat complains about “the feeling of uncertainty. Almost anything can and might happen to me, anytime, anywhere.”

A scene from Buenos Aires, Argentina, which might look lovely from afar—but expats complain about the safety.

4. Argentina (61st overall). A Lithuanian expat feels that “it is not safe here, and the people are not friendly.” A U.S. expat complains: “You can’t plan financially because the economy fluctuates too often. You’re far from everywhere. Safety is a major concern.”

5. India (60th overall). An Australian expat dislikes “how the assumptions about foreign women ‘being easy’ make it unsafe to do so many things alone” as well as the “hardline politics…the social tensions and the very bad pollution.” A Canadian expat reports how she “constantly feels like an outsider. People stare at me, take my photo, talk to me horribly, try to cheat me, etc. because they assume that I am a rich tourist. I also have faced severe sexual harassment from local men, to the point that I now carry pepper spray everywhere.”

6. Peru (59th overall). A Spanish expat complains that it is “not easy to make friends among the local residents—they also have an aggressive attitude on the streets.” A Venezuelan expat dislikes “the mistreatment of women, the poor working conditions and the general lack of common courtesy.”

The skyline of Nairobi, one of the most dangerous places to live.

7. Kenya (58th overall). A Danish expat complains that “that I can’t walk on the street because it’s not safe: I have to drive or be driven everywhere.” A Croatian expat dislikes how “foreigners are often taken advantage of through stealing, scamming, and police stopping you just to take money from you. The roads are awful, traffic is just terrible, and the city is dirty.”

8. Ukraine (57th overall). A Bulgarian expat complains about “corruption, a total lack of loyalty or honesty, and foreigners being considered ‘walking wallets.’” A U.S. expat thinks that “the laws don‘t work; there is corruption on every level.”

9. Turkey (56th overall). A Sri Lankan expat complains how “being a person of color is challenging. Especially in the outskirts of the capital, you get harassed.” A British expat dislikes the “constant politics and propaganda that is dividing the society. People are frightened to speak or pass an opinion.”

Police patrolling the beaches of San Andres Island in Colombia.

10. Colombia (55th overall). A Canadian expat complains about “the politics and insecurity of the future regarding the possibility of political change. The traffic is bad, too, and the crime rate takes some getting used to. The news here is almost all negative.” A Venezuelan expat dislikes “the corruption. The system is unfair to both natives and expats, and local companies are not so open to foreigners.”

11. Mexico (54th overall). A British expat feels that “personal security is a big issue, specifically for business leaders.” A Canadian expat worries about “the increasing criminality of the cartels as well as the corruption which steals money from the people.”

12. United Kingdom (53rd overall). A Bulgarian expat reports “concerns about racism, overpopulated areas, crime increasing, accommodation prices, and a lack of support about reintegration and residency help.” One Dutch expat is worried about “the uncertainty surrounding Brexit and its consequences for me, my residency in the United Kingdom, and potential difficulties with traveling to and from the U.K. after the Brexit!”

A view of the old city of Cairo in Egypt, a dangerous place to live.

13. Egypt (52nd overall). A British expat has complaints about “the government, poor infrastructure, horrendous traffic, poor condition of roads, poor condition of buildings, and overcrowding.” A Ugandan expat dislikes how “many of the Egyptian people discriminate and are not friendly. Many men have no respect for black women and are rather abusive.”

14. Philippines (51st overall). A U.S. expat complains that there are “too many laws restricting foreigners and it is almost impossible to own land. There is also corruption and many irresponsible drivers.” A French expat speaks of “poor infrastructure, traffic jams, and a lack of green spaces. The quality of life is poor.”

15. Italy (50th overall). A Mexican expat complains about the “bureaucracy and close-mindedness of the people.” A Polish expat reports that “the political situation is changing. Foreigners now have more difficulty registering, accessing healthcare and purchasing property.”

A memorial for shooting victims near the “Welcome to Las Vegas” sign.

16. United States (49th overall). A German respondent, says that “politics and the ‘new normal’ that is emerging here are alarming. The general mindset and culture seems narcissist and very much ‘me first’ and that shows up in too many ways on too many levels.” Another German expat dislikes “widespread conservative viewpoints, seeing ‘socialism’ as an inherent evil, lack of gun control, lack of affordable healthcare and education, overly religious views.” A Brazilian expat shares concerns about “racism, xenophobia and guns.”

17. Indonesia (48th overall). A Malaysian expat expresses concerns over “politics and religious extremism.” A Chinese expat dislikes “corruption, difficulty in accessing healthcare and transportation, and unfairness in the laws.”

18. Greece (47th overall). An Australian expat reports that “the bureaucracy is maddening, as is the overall indifference of staff employed in/by government services.” A Russian expat complains of a “bad economic situation, bad education, and poor career opportunities.”

A scenic view of Kuwait City, on the list of dangerous places to live.

19. Kuwait (46th overall). A French expat complains about “unfriendly people and discrimination towards some nationalities. The country is also not very environmentally friendly.” An Australian expat dislikes the “traffic and dangerous roads” and also feels that the “culture can seem unfriendly.”

20. Thailand (45 overall). A Pakistani expat is concerned about “unfavorable government policies towards foreigners, difficulty and a lack of government support when doing business, corruption and a large language barrier.” A Russian expat dislikes the “undeveloped infrastructure, dirt, garbage, noise, messy streets, chaos—there’s almost no peace at all.”

• “23 Surprising Things That Will Get You In Trouble In Italy”

• “20 Most Dangerous Places For Women Travelers”