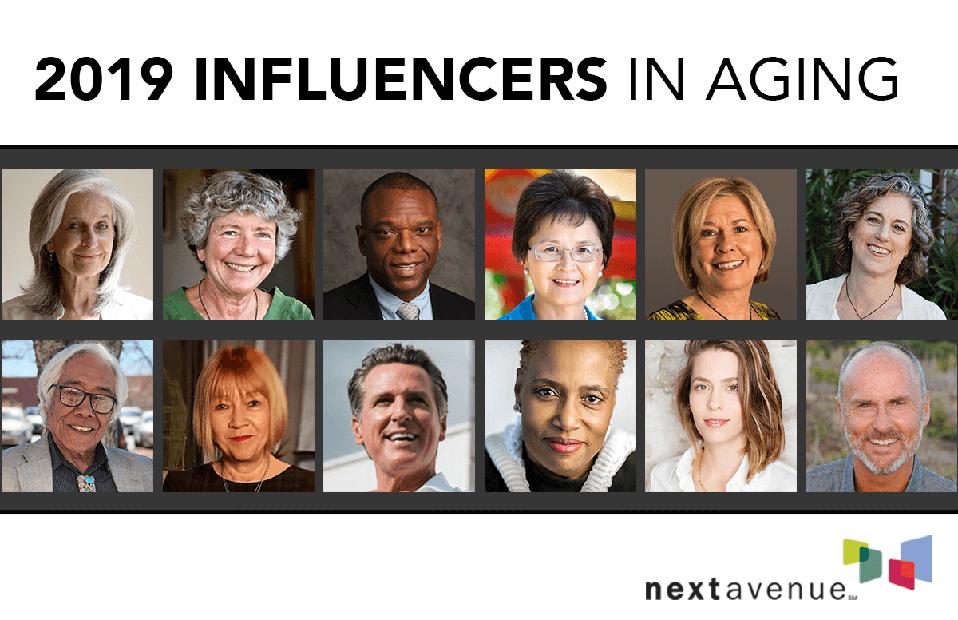 For the past five years, Next Avenue — public media’s first and only national journalism service for America’s older population — has released a list of “Influencers in Aging.” Our goal is to name a dozen groundbreakers who, in the past year, have helped transform attitudes about aging, presented innovative insights and research and opened up new possibilities for all of us.

Next Avenue’s 2019 Influencers in Aging are:

Dr. Louise Aronson, a practicing geriatrician and professor of geriatrics at the University of California San Francisco (UCSF). Her interests include optimizing health care for older adults, medical education and integrative geriatrics, which is a relatively new field of medicine that advocates for a patient-centered, whole-person, non-pharmacological approach to medical care for older adults. Aronson’s writing has been featured in The New York Times, The Washington Post and on NPR, as well as in many scholarly articles. Recently, she has received national attention for her groundbreaking book Elderhood: Redefining Aging, Transforming Medicine and Reimagining Life, which was released in June 2019.

Chip Conley, a hospitality entrepreneur who coined the term “modern elder” when he jointed Airbnb at 52 as a strategic adviser and was twice the age of the average employee there. In the last year, he has opened the Modern Elder Academy, a boutique resort for midlife learning and reflection in Mexico, and published [email protected]: The Making of a Modern Elder. Conley calls the academy, which enrolled 500 students from 17 countries, “the first midlife wisdom school.” Through his school, book and frequent lectures, Conley helps people in what he calls “middlescence” learn how to spread their wisdom and prepare for this new time of their lives.

Larry Curley, a member of the Navajo Nation who, with members of the National Tribal Chairmen’s Association, founded the National Indian Council on Aging (NICOA) in 1976. NICOA is a nonprofit that advocates for health, social services and economic well-being for American Indian and Alaska Native Elders. Curley was instrumental in getting funds directed to Native elders through Title VI of the Older Americans Act in 1978 and spent decades working as a gerontological planner at the Pima Council on Aging in Tucson, Ariz., directing the Navajo Nation’s Head Start program and serving as a nursing home administrator in a tribal, long-term care facility. Now, Curley’s career has gone full circle, bringing him back to NICOA as its newest executive director.

Sharon Emek, a top leader in the insurance industry and the president and CEO of WAHVE (Work at Home Vintage Experts). In 2010, she founded this company devoted to pairing home-based, older professionals (she calls them “pre-tirees”) in the accounting, insurance and human resources fields, with clients across the country. Throughout her career, Emek, 73, has been the recipient of several awards, most recently a 2018 Leadership Longevity Award for Women in Innovation and Entrepreneurship which she received at the What’s Next Boomer Summit earlier this year. At the 15th annual Silicon Valley Boomer Venture Summit in June 2019, WAHVE was a winner in its Silicon Valley Innovation Competition, sponsored by AARP Innovation Labs. Emek’s company will go on to compete in a national contest this fall in Washington, D.C. In 2016, Emek was awarded the SmartCEO Brava Award, and in 2014, she was the first woman to receive the 1882 Fellow Award from Big I New York, an insurance industry organization.

Keren Etkin, 32, who calls herself “a gerontologist by training and a tech enthusiast by nature.” In 2015, Etkin, who lives in Tel Aviv, received a master’s degree in gerontology from Ben-Gurion University of the Negev, and two years later, founded TheGerontechnologist.com. Etkin recently left Intuition Robotics after 3 ½ years, where she worked as a researcher and “robot tamer” and helped develop ElliQ, the social companion robot for older adults. Etkin is now doing public speaking and working as a consultant to several organizations looking to implement technology for aging populations. She’s also creating additional content for The Gerontechnologist, including video and a podcast.

Cindy Gallop, an iconoclastic former advertising executive, is working with AARP on its Disrupt Aging campaign. She seeks to change the way older Americans are portrayed in advertisements and how older advertising workers are treated, calling the field an extremely ageist industry. Gallop loves to tell people how old she is. She says it’s a special number because it’s a subtotal of your learnings, life experiences and everything you’ve been through to date. “I’m fifty-nine and shout it from the rooftops,” she says.

Ronald Long, director of Wells Fargo’s Elder Clients Initiatives team since 2014, created what’s become a key brokerage industry tool to protect older investors from elder financial elder abuse. Long and his team originated the “In Case of Emergency” form so advisers could contact someone if they thought their client had cognitive difficulties or might be a victim of elder abuse. Now, the brokerage industry’s self-regulator, FINRA, is using a version called the Trusted Contact form. The need is urgent: Annual losses from elder financial abuse in the U.S. are estimated to exceed $36 billion. In April 2019, Long — based in St. Louis — broadened his scope to assist elder customers of all Wells Fargo’s divisions, heading up the company’s new Elder Client Initiatives Center of Excellence.

California Gov. Gavin Newsom, who promised he’d create a Master Plan for Aging for the state and its residents when he ran for governor in 2018. One reason: the Golden State’s 65+ population is projected to grow almost 90% by 2030, topping roughly 8.6 million. After his election, Democrat Newsom quickly appointed a team to turn the Master Plan idea into reality by Oct. 1, 2020. As he said in his State of the State address: “It’s time for a new Master Plan on Aging. It must address person-centered care, the patchwork of public services, social isolation, bed-locked seniors in need of transportation, the nursing shortage, and demand for In-Home Supportive Services that far outpaces its capacity.” California will be the largest state with a Master Plan on Aging, and one of just five in the nation; the others are Colorado, Connecticut, Minnesota and Washington. Newsom’s Master Plan will have a cabinet-level working group. “For older Californians, the Master Plan for Aging is probably the most significant thing to happen since the state became a state,” said Dr. Bruce Chernof, a member of the Master Plan’s Stakeholder Advisory Committee and CEO of The SCAN Foundation (focused on finding innovative needs to the health care needs of older Californians).

Mary Pipher, who in 1994 wrote Reviving Ophelia: Saving the Selves of Adolescent Girls, a groundbreaking, bestselling book examining the complicated lives of teenage girls. It was the result of her work as a clinical psychologist with this age group. And it led Pipher to receive the American Psychological Association’s Presidential Citation. Earlier this year, Pipher and her daughter, Sara Pipher Gilliam, collaborated on a revised 25th anniversary edition. This year, Pipher, 71, wrote an equally compelling bestseller about an older group — Women Rowing North: Navigating Life’s Currents and Flourishing as We Age. A cultural anthropologist, Pipher is the author of 10 books, including Seeking Peace and Writing to Change the World.

Dr. Tia Powell, a professor of psychiatry and bioethics at the Albert Einstein College of Medicine in New York. She is the director of the Montefiore Einstein Center for Bioethics and the Einstein-Cardozo Master of Science in Bioethics program. Powell has received national attention and praise for her book Dementia Reimagined: Building a Life of Joy and Dignity from Beginning to End. The book, released in April 2019, blends a history of how dementia has been viewed in the U.S. — by society and the medical world — with her thoughts on what compassionate care for people with dementia could ideally be and how she’d like to live if she’s given a diagnosis of dementia, as others in her family have.

Imani Woody, president and CEO of Mary’s House for Older Adults. Woody’s father left her his home in Washington, D.C. — the one she grew up in ­— when he died in 2010. Faced with the decision of what to do with the house, Woody, a lifelong activist for women, people of color and the LGBTQ community, chose to renovate the house and turn it into the first of hopefully many locations of Mary’s House (named for her late mother). It’s an affordable independent living community for older adults targeting the cultural and relational needs of LGBTQ older adults. Mary’s House renovations began in 2012, ground will break in January 2020 and residents will move in by November 2020.

In recognizing the people who are making the biggest impact, we hope to spark conversation, engage in new ideas and motivate others to become involved in the important work of innovating the way we age and think about aging.

An Unusual Tax Court Hobby Loss Opinion
Settled medical debt is now dropping off credit reports — here’s how to check your record and make sure it’s right
Microsoft And Cisco Face Shareholder Pressure Over Public Disclosures
Most workers want their employer to share their values — 56% won’t even consider a workplace that doesn’t, survey finds
44% of Americans work a side hustle to make ends meet — but it may not be an efficient way to earn more, says expert