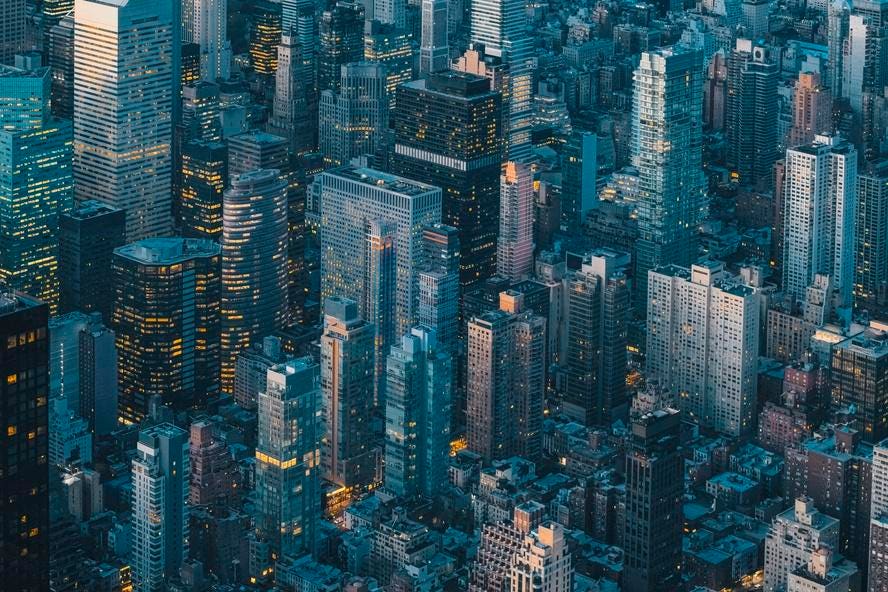 During the first six months of 2022, New York City’s Investment Sales market experienced both volume and pricing growth. The market came off a strong year in 2021 and the economic drivers and demand were dominant.

Dollar volume in New York City totaled $22 billion in 1H 2022, up 181% year-over-year. In fact, in the last 12 months dollar volume reached approximately $45 billion, the highest level over the past five years.

But the drivers for growth were diverse. The first driver was the recovery from COVID, the strong rental market in the city and growing demand due to migration back to the city, employment growth and an increase in tourism, retail foot traffic and subway ridership. In addition, rising interest rates and inflation created an exceptional sense of urgency for investors racing to capture the still lower interest rates during the first half of 2022. As a result, income producing assets such as free-market multifamily, quality office buildings and industrial assets did exceptionally well.

Although the average price per square foot for each borough grew from last year, when compared to 2019, it is still lower today for the most part. For example, Manhattan prices showed a significant pricing growth of 12% growth from last year, but Manhattan multifamily buildings are still 21% lower than in 2019 on average. When looking citywide, the average cap rate was 75 basis points higher than the national cap rate for major markets, which is prompting investors to sell in other states and bring their capital back to the Big Apple. Gaia Real Estate, for example, just exited a 1.5 billion portfolio and started deploying that capital in New York City.

As a result, New York City seems considerably undervalued compared to other cities and compared to its 2019 levels and, therefore, positioned well to continue the investment growth in multifamily compared to the rest of the country.

Free market multifamily accounted for 75% of the dollar volume in the first six months of the year, with institutional investors dominating. However, what these institutions purchased was diverse and interesting. For example: Blackstone, Stockbridge / Stonehenge and A&E purchased the luxury Manhattan addresses of: 8 Spruce, 354 E 91st, and 140 Riverside for a total of more than $1.3 billion. Avanath, purchased a luxury apartment in 38 6th Avenue in Brooklyn spending $315 million and The Carlyle Group, which has been buying up buildings with 10 units and under in the outer boroughs through an affiliate, recently refinanced a loan for 39 properties in Brooklyn and Queens for $500 million. In the end, we see a true Institutional desire to invest in New York City any which way possible.

The dollar volume of development sites fell 24% in 1H 2022 to $2.3 billion and transactions declined by 9% to 191 compared to 2H 2021, while year-over-year dollar volume increased 81% and transactions rose 26%. But this is not a shocking statistic as the state did not renew its 421a tax abatement and without it rental development is not economically viable. This means, the supply constraint is tighter: the city will be short 560,000 units by 2030 with only 25% in the pipeline, according to a REBNY-commissioned study. Therefore, the affordability crisis in New York City is expected to continue because without a new supply, rents will continue to escalate.

Office building sales were led by quality, mainly location and tenancy. In one example, RFR purchased the 1920s-era 475 Fifth Ave for $290 million, more than double the $143.9 million Nuveen Real Estate paid for it in 2011, which exemplifies that investors remain bullish on this sector.

The office market is experiencing a flight to quality, which is enabling owners of Class A new construction towers to charge premium rents, while many owners of Class B and C buildings are adjusting to the hybrid environment by offering tenants more flexible options.

Interest rates and inflation are on every investor’s mind and they account for higher likelihood of recession and slower job market. But when it comes to New York City real estate, the local indicators are positive. All the mobility reports are rising: subway ridership, retail foot-traffic, tourism, residential demand and employment. In addition, major investments from companies like Google and infrastructure investments such as connecting the Long Island Railroad to Grand Central Terminal by year end will enhance the demand factors in the very near future. The political environment, especially in City Hall, turned pro-business which is helpful.

Lastly, New York presents a very compelling argument when compared to other states. Therefore, we believe we will continue to see investors and capital continuing their trajectory of buying the City in the foreseeable future.

Malcolm Gladwell, addressing criticism: ‘Solitary work’ can be done at home but for creative work, ‘offices really do matter’
Stocks making the biggest moves after hours: Cisco, Wolfspeed & more
A high-profile meeting in China may have tipped off which provinces will have highest growth
Dow Jumps Nearly 200 Points Despite ‘Underwhelming’ Data From China Sparking Global Recession Fears
Ultra-rich fueling sales of luxury brands despite inflation and recession fears