A selection of Netflix original content sits displayed in the Netflix app on an Apple iPad tablet device in this arranged photograph in London.

Netflix is putting out strong performance data but investors don’t seem to care, according to Credit Suisse.

Despite positive numbers coming from app downloads and a stellar slate of original content coming out of the streaming company, investors are still fleeing the stock, the firm said.

“Investor interest in Netflix is at a nadir with a view the stock will not work given these competitive launches the next few quarters,” said Credit Suisse research analyst Douglas Mitchelson in a note to clients on Monday. “This suggests that for Netflix shares to rebound, 3Q19 results would have to come in well ahead of expectations.” 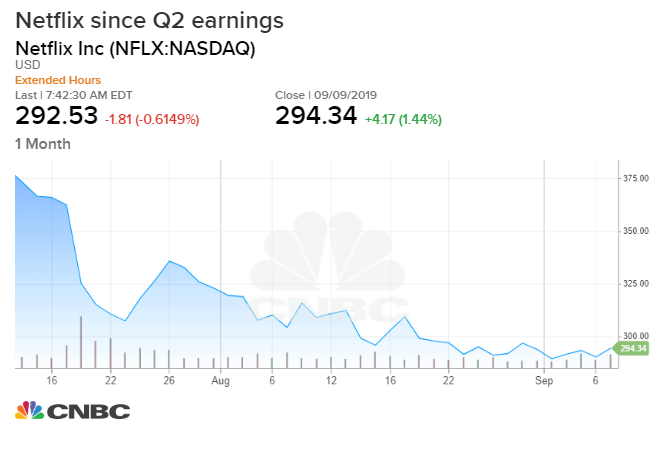 Shares of Netflix have cratered nearly 20% since the company reported second-quarter earnings that showed a rare loss in U.S. subscribers and a big whiff on international subscriber adds. Investors are cautious on the stock with new streaming launches from Disney, Apple and HBO on the horizon. Mitchelson said a huge beat on third-quarter earnings could be the only way for the stock to reverse course.

Alongside that rebound, the firm’s tracking also shows a pickup in original content this quarter, particularly with Hollywood dramas and international series. Mitchelson points out how far ahead Netflix is from its soon-to-launch competition.

“We have tracked 48 titles in development at Disney+, 43 at Apple’s TV+ and 23 at HBO Max vs. Netflix with 71 English-language dramas, 62 non-English series, 32 comedies and 108 films in development,” said Mitchelson.

Credit Suisse has an outperform rating on the stock and a $440 price target. The stock trades around $294 per share.

Shares of Netflix sunk 1.5% on Tuesday.