Netflix is missing out on the broader market’s rally, but don’t give up on the stock, says Piper Jaffray.

The firm reiterated its overweight rating on the stock and its $440 price target.

“Despite an onslaught of new streaming services currently casting a cloud of concern over NFLX shares, we expect the company will continue to capture a significant portion of traditional content dollars, as those dollars migrate to streaming,” said Piper Jaffray’s senior research analyst Michael Olson in a note to clients on Friday. 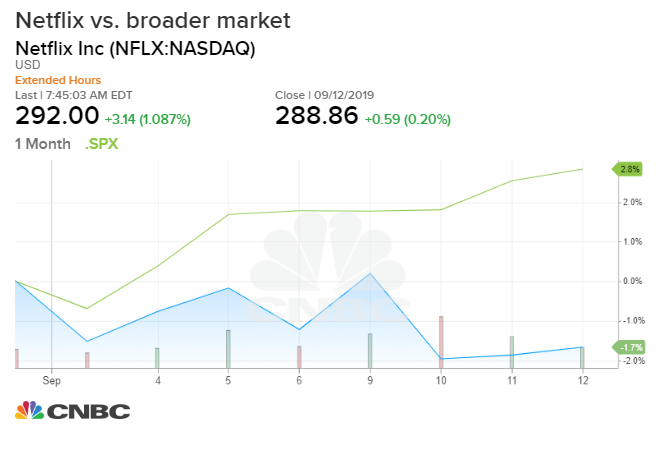 Shares of Netflix are lagging the broader market right now, down 2% this month while the S&P 500 is up nearly 3% in September. Investors are cautious on the company with other new streaming launches from Apple, Disney and HBO on the horizon. Netflix’s stock took a dive on Tuesday after Apple announced its original TV service will cost $4.99 a month and launch Nov. 1. Netflix raised the price of its subscription plan to $8.99 in January.

Olson estimates third-quarter domestic subscription growth will be around 6.4% year-over-year and international growth in a range of 33% to 35%.

Netflix’s content slate in the second half of 2019 is much stronger than in the second-quarter, Olson added. A new season of The Crown and several original films such as El Camino: A Breaking Bad Movie and The Irishman from Martin Scorsese are expected to boost subscribers.

“There should be a positive impact from an improving slate and we are, therefore, optimistic about the company’s opportunity to grow subscriber additions y/y on a FY basis,” said Olson.

Shares of Netflix were 1.2% higher in premarket trading on Friday.