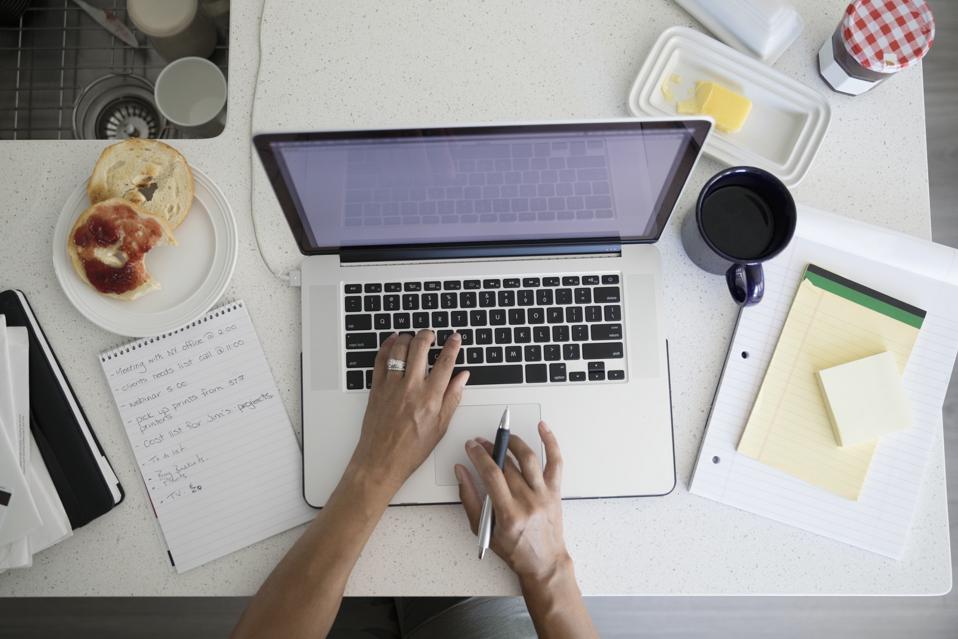 It’s 7 a.m., and, like clockwork, the Nonpolitical News digital newsletter lands in my email inbox. I’m a subscriber.

After slogging through my daily morning news reading — mostly from national media outlets and my Twitter feed — this free newsletter is a breath of fresh air. It’s filled with short, breezy news highlights and stuffed with links to “some need-to-know news, some nice-to-know and some ‘who knew?” as Vera Gibbons, the second-act founder and editor of NonPoliticalNews.com (NoPo) described it to me in an interview.

The 52-year-old TV financial journalist launched NoPo newsletter —“for those who are sick and tired of the political headlines” she told me — last year because she felt she needed to make a career switch.

“There came a point when the political climate became so relevant, and that’s all anybody was covering (on TV). My air time got slashed by fifty percent. I was at a crossroads,” she said. “I don’t talk politics. They really only wanted political people on air either pro or con. It was, ‘Well, I’m going to have to do something different, if I want to keep working. I’ve been in the news business forever. So, it was a logical next step for me.”

Gibbons is a former financial contributor to CBS’ The Early Show and has worked as a correspondent for CNBC’s High Net Worth and MSNBC. She still appears on national news networks and writes freelance articles.

Risks and Rewards of a Midlife Career Change

Gibbons told me she’s well aware of the risks and challenges of a midlife career change. But she was frustrated by the changing news business and looking for a way to remain relevant in a field she’s passionate about.

Each of the newsletter’s sections — Consumer/Personal Finance, Health/Wellness, Fashion/Beauty and Fitness/Diet — has five to seven links to the latest news ranging from, say, Walmart unveiling a rewards credit card to how to find the perfect workout for your personality.

Gibbons is fortunate. She’s a saver and built up enough of a financial cushion to take a leap of faith and self-fund her venture. Meantime, she has enough freelance business on the side to help pay some bills while building the newsletter to the point where she can pay herself.

Here are excerpts from my conversation with Vera Gibbons about starting a newsletter business as a second act in midlife:

Kerry Hannon: There seems to be plenty of competition in the newsletter arena, particularly The Skimm, the current-events newsletter for millennial women. Who is your target audience?

Vera Gibbons: My audience, which is now twenty-five thousand subscribers from New York to Dubai to Hong Kong and Los Angeles, is more for my age — for Skimm parents, if you will. They are smart, educated, sophisticated and many are news junkies like me.

Another differentiator: They’re explaining the news; I’m exposing it — all the stuff that isn’t getting covered due to the heavy political coverage.

I often say about second acts that you’re not reinventing yourself, but often redeploying skills from your previous career. How is that true with your experience?

That is so true for me. I know news. I love the news. To transfer my skills over was a slam dunk. It was an easy transition.

Who do you consider your competitors?

There are lots of other newsletters out there. We are the only ones doing nonpolitical news only. I do like Morning Brew and read that regularly just to see what they’re up to. I also read Market Snacks, but they, like the others, are explainers. Then there are explainers like The New York Times, CNN, Huff Po; but they only use their own stories, of course.

What have you learned trying to start a newsletter in midlife? What’s been your biggest challenge?

I’ve learned the importance of having a team as dedicated as you are to the service.

The biggest challenge has been finding the right people to have on my team. You really need people as devoted and committed as you are. We only have news junkies helping us out who are crazy and spirited and love news as much as I do.

They’re volunteering their time at this stage. They provide a lot of the stories over the course of the day. I get up between 4 a.m. and 5 a.m. to curate what they have given me, and I turn the TV on to see if there’s anything that’s more relevant.

I’m trying not to bite off more than I can chew. Now people are saying ‘You need a podcast.’ I’m focused on doing one thing, and doing it very well.

And what have been the rewards of becoming an entrepreneur in midlife?

At this stage in my career, I know the news business and have a network of people who trust my judgment. I have television news show bookers and producers and anchors opening the newsletter every single day. They know I’m a reliable source. The biggest reward is seeing the growth of the product.

Getting the thumbs up from subscribers means the world to me.

What’s your advice to others who want to launch a start up at this stage in their lives?

Go slowly. You have to test the waters and see if there’s a market.

I started on Facebook, posting items as updates. It was almost a hobby at first. And I kept getting more and more Likes, and people saying I should really do more with it.

I began solo, but currently have a team of six, who all work remotely. I work out of my home office, on the Upper East Side of Manhattan.

What’s a ballpark figure for what you’ve invested in your venture?

I’ve invested probably fifty thousand dollars of my own money and have been bootstrapping up to this point.

The legal fees are the most expensive. Trademark searches alone were about ten thousand dollars. My next big expense is my techie, who is on retainer. He handles delivery issues, website, design, promotions and hosting.

I do have venture capital firms calling and have met with potential investors. But for now, I would like to focus on the growth of newsletter. Taking on investors is a different ballpark. Now I have control of the content and can put in the stories I want.

When do you expect to be able to pay yourself?