If you feel like spending on your kids took a toll on your summer budget, you’re not alone.

A new survey from TD Ameritrade finds that 52% of parents with children under 18 spent more than they intended to this summer.

The top reason that parents of children under 18 spent more this year was wanting to treat their family and kids, with 55% of those surveyed. One other cause: Twenty-three percent felt pressured to shell out the money.

What’s more, more than half of parents with kids under 18 said the summer is more expensive than the holiday season.

“Parents realize they have 18 summers with their kids before they head off to college,” said Dara Luber, senior manager of retirement at TD Ameritrade. “It’s all about experiences now and not just buying them things.”

The No. 1 budget killer, according to parents, was the family vacation, which cost an average $2,027.

Coming in second was tutoring or education costs, which totaled $1,207. Third were parent getaways without the kids, which came in at $1,059. 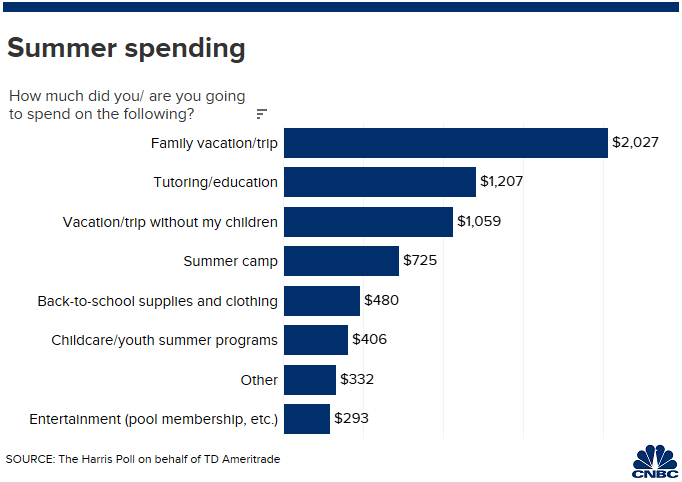 To help mitigate such costs, parents should try to use money-saving strategies, Luber said. For example:

Plan in advance. Think about where you want to go, and include your children in the discussion. Consider whether you want to drive or fly. Identify travel perks or discounts that you may want to use and book ahead of time. “Planning in advance makes it a little more palatable,” Luber said.

Set a budget. Decide what you can afford to do. Also try to pay for those costs in advance. That way, it will be easier to stick to your budget, according to Luber. One strategy she uses is to have her children put change in a jar over the course of the year. Then when they go on vacation, they use that for their spending money.

More from Personal Finance:
There’s also a gender gap when it comes to financial security
Here’s how to avoid some big money mistakes
Own a home in Dorian’s path? How to prepare for claims

Look for deals and economize. If your children like a particular place, such as an amusement park, consider getting a season pass. That way, if your family visits frequently, that offsets the cost per visit, Luber said.

Consider cheaper alternatives. A so-called staycation or trip to a local park could include that quality family time you’re looking for at a fraction of the cost, Luber said.

One way parents can mitigate summer expenses: working a side gig. The survey found that 18% of parents with children under 18 have another income stream, compared to just 6% of parents of adult children.

TD Ameritrade’s online poll was conducted by the Harris Poll in August. It included 1,015 U.S. adults ages 23 and up with at least $10,000 in investable assets.