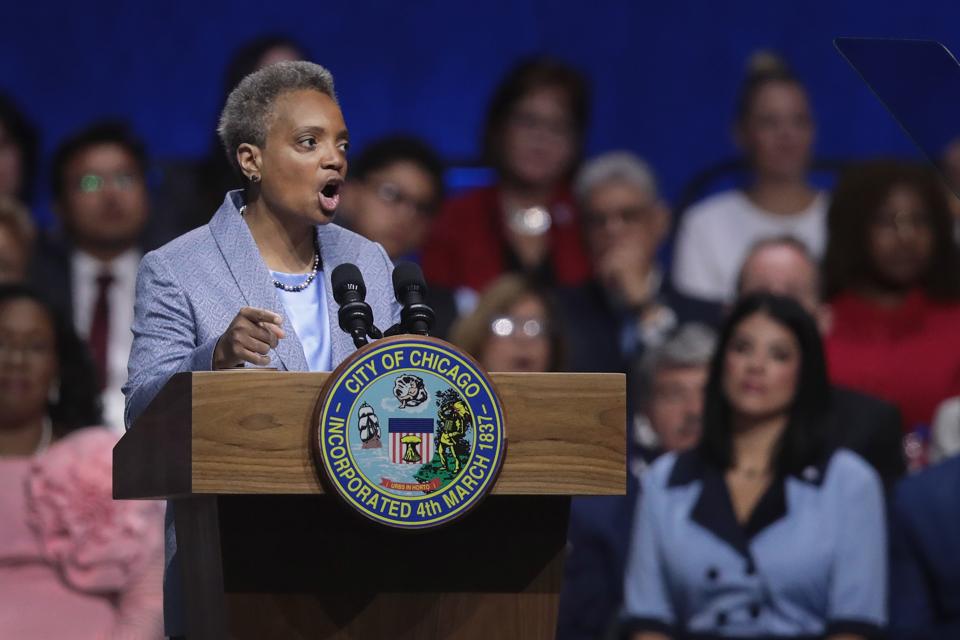 The clock continues to tick on Chicago’s 23% funded pensions. City officials are focused on the jump in contributions due to the funding ramp, but it’s more than that: every month that goes by is another month with unsupportably-high pension checks, and unsustainable Tier I pension accruals.

As it happens, on Tuesday night, Chicago Mayor Lori Lightfoot gave her State of the City address, and acknowledged the effect of the pension contributions on the city’s overall budget hole, and the need for “structural changes” (see page 19 of the full text) to solve the pension funding crisis.

But what “structural changes” does she have in mind? Everyone’s parsing her words, but an interview Friday morning with the Crain’s editorial board is enough to dash hopes that she’s got a viable plan to resolve the crisis. (The interview can be viewed on the Crain’s Chicago Business Facebook page in two parts, here and here; what follows is based on my own transcription of her comments.)

Lightfoot responds to the first question on the topic by referencing her speech the night before, that there is a “need to come together as a state to really rally around solving our structural pension challenges, and that was intended to be a call to action.” She says, we need to “build a chorus of support” statewide because

“cities and towns across Illinois . . . are facing precisely the same challenges with their pensions that we are here in Chicago. This is not a Chicago-only, or, I hate the term, a Chicago bailout. . . . This is a challenge that we have to meet as a state.”

But what does she mean by “structural pension change”? Would she support a constitutional amendment to enable to state and city to be able to modify pensions?

“We all know what the range of different options are, a lot of it’s going to depend on whether or not we are able to build some consensus in Springfield about what those options are, so I’m not ruling one in or one out. I think the governor, when the previous mayor said last fall after he announced he wasn’t running for re-election, said we ought to have a constitutional amendment, the governor immediately said no, so that limits the options obviously, and I’m not advocating for a constitutional amendment but short of that I think there are some things we can do to address the systemic problem of chronic underfunding.”

Upon being pressed further, Lightfoot starts with the need for a redo on the casino-authorizing legislation, given the feasibility study that demonstrated that concluded that no corporation would want to build a casino in the city under the tax structure laid out in the authorizing law.

She also reiterated the desire to include Chicago’s police and fire pensions into the wider project of consolidating downstate local police and fire funds: “We want to make sure that Chicago is also part of that conversation. . . . Any conversation on pension consolidations outside of Chicago has to deal Chicago in.” But that’s something Gov. Pritzker has deemed a nonstarter, and, even if he were open to the idea, it wouldn’t be the money-saver Lightfoot seems to think it is; it’s about providing economies of scale for rinky-dink pension funds, which is not an issue for the city’s much-larger pensions, and is in no way envisioned as a bailout with funds added in by the state.

She revealed that she had been interested in extending the ramp to stall even further on the contribution increases, but that the “response from ratings agencies [was] decidedly negative. I didn’t want to risk a downgrade. . . . if we made any attempt to extend the ramp, we were looking at a pretty substantial downgrade.”

When pressed by the interviewer for any further examples of structural reforms, she mentioned her real estate transfer tax increase proposal.

She was then asked, “would you like to see the governor reconsider his opposition [to an amendment]?” and replied:

“I want to be careful about this obviously, because it raises lots of concerns amongs lots of quarters, not least of which is in organized labor. I think we have to put as many options as we possible can on the table. We know that the circumstances we find ourselves in with the COLA compounded annually is unsustainable, but I also really feel strongly that we cannot undercut the working men and women that are relying on their pensions, and that puts us in a very precarious position, limits the options, I am aware of that.”

Later in the interview (about 20:00), she is asked about her statement that the COLA is “unsustainable” and she backtracks:

“What I said is 3% compounded annually is a tough climb. It means that we have to consistently feed that beast.”

And upon being question on whether this position is fair to the taxpayers who will have to shoulder these burdens, she replies:

“Pensioners are taxpayers. The thing that gets lost in these conversations is that in the city of Chicago people who have public pensions make up the middle class of our neighborhoods. They are our teachers, our workers, and if they leave, if they are treated unfairly, it can have a potentially catastrophic effect on what happens in our neighborhoods.”

Folks, that right there is unsustainable, if you have such a disproportionate number of retirees compared to taxpayers, and if the city is short on a private-sector-employed middle-class.

Lightfoot then begins to talk about the hollowing-out of the city, and the departure of the middle-class, and acknowledges the impact of tax burdens as well as affordable housing and the job market. But, asked once again, about whether the cost of living adjustment should be tied to actual cost of living changes, she says, “I think that’s something that we absolutely have to talk about,” and then again vaguely states that

“I haven’t personally studied that issue . . . but we need to have the conversation about what is driving the pension cost.”

Folks, I will reiterate again (before resuming my deeper dive into eldercare) that there is no solution to a 23% pension funding level that does not involve a constitutional amendment and reform of the plan benefits themselves. No study of what is “driving the pension cost” will suggest any heretofore unseen insight; what is driving it is the inevitable impact of benefit increases, the demographics of an increasingly imbalanced share of retirees relative to workers, and the relentless impact of interest rate compounding when expected investment returns don’t go your way. (And yes, you can revisit my January articles on the topic here.)

Lightfoot seems to think that somewhere, if only the right experts put their heads together, there’ll be another solution that can make everyone happy, without any sacrifices. (And, yes, I’ll also admit that I take it as a given that budgets cannot be balanced by gambling expansion, especially when there has not been much study of the social impacts of such widescale gambling expansion.) But there’s not. All the low-hanging fruit — the Tier II and III systems, the OPEB eliminations — has already been picked, and even that has been done unsustainably, as the new benefit formulas are so miserly that, when the post-2010-hired workers eventually gain enough service to have power in their unions, they will demand improvements in their own benefits. And it should also go without saying that she has no business imagining that the state, with its own pension-underfunding woes (40% is better than 23% but nothing to boast of), should even think of sending more money into Chicago pension fund coffers.

The bottom line is that Lightfoot needs to lead. She can’t hide behind Pritzker’s unwillingness to support a constitutional amendment, or that of the labor unions, but needs to build a base of support to persuade him, and them, of the importance of shared sacrifice for the sake of the well-being of the city and its residents.

Alec Baldwin charged in ‘Rust’ shooting, prosecutors say he was ‘distracted’ during training
As some retirees worry about surprises this tax season, these resources may help
Rivian to lay off 6% of its workforce as EV price war concerns grow
Snap shares plunge on weak revenue as digital ad struggles continue
Medicare users still have time to change, drop 2023 Advantage Plan coverage. What to know