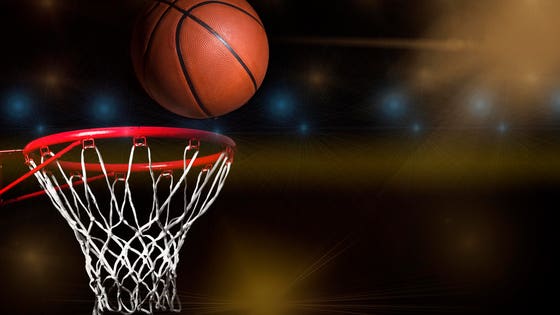 Here is what Claude Tate George is most remembered for

The Shot Seen Round NCAA

In the 1990 NCAA March Madness George caught a pass from Scott Burrell with one second on the clock and made “the shot” that gave the U Conn Huskies the win over Clemson that put them in what Matt Zemek considered the best sweet sixteen ever when he looked back on it 25 years later.

George had three seasons with the New Jersey Nets and one with the Milwaukee Bucks. I will leave it to my readers to judge the quality of his NBA career. I know less about sports than the average American male and have a particular aversion to basketball.

His subsequent career purportedly in real estate did not go so well. If you can believe this DOJ news release from 2016 there was not actually much in the way of real estate involved in The George Group

“By shamelessly cashing in on his celebrity C. Tate George stole $2 million from investors who trusted him as a former NBA athlete,” FBI-Newark Special Agent in Charge Richard M. Frankel said. “George used the money to pay other investors in the Ponzi-style scheme and lined his pockets with the rest, funding extensive renovations on his home, paying for his daughter’s sixteenth birthday party and producing a reality video about himself.”

For the life of me, I don’t understand why people would be inclined to invest with somebody because they had been a basketball star.

And Now In Tax Court

At any rate, what I have to report about Claude Tate George, now serving his sentence, is less exciting, but it is of some interest and actually includes some practical wisdom. The news is a recent Tax Court decision from Judge Halpern.

Since he didn’t prepare a return for himself, the IRS prepared one for him. The balance due was $28,696, mostly due to the early withdrawal penalty.

Not filing your return is, in effect, an election to not itemize. Mr. George argued that he did not file because he could not collect the documentation to determine his itemized deductions. In the Tax Court litigation, however, he made no indication as to what those deductions might have been.

The lesson here is that if you let the IRS do your return for you, the result is not going to be in your favor.

Collections Is A Different Ball Game

Likely Mr. George is probably not harmed all that much by this decision. The other argument that he put out was that paying the balance due would be a hardship for his family. Judge Halpern noted that that is an argument for another day after the IRS actually takes collection action.

As to the appropriateness of a collection action that respondent might take to collect petitioner’s unpaid 2013 tax, or with respect to any collection alternative that petitioner might offer respondent, petitioner will have the opportunity to raise those matters during the collection process.

Besides his 108 month sentence Mr. George has a restitution amount of over $2 million to deal with. I think there is a strong possibility that the deficiency will be classified “currently not collectible” and the ten year clock will run it out. If that is the case, bringing this action was probably a mistake, since there will be more time for the IRS to attempt collection after his release.

For What It Is Worth

Mr. George is still appealing his conviction and the reasonableness of his sentence. The last motion in the case was in August. It is not easy reading, but here it is if you want some of his side of the story.

Lew Taishoff has You Can’t Go Back.

Well, being in the slammer is not necessarily an excuse for not filing. And Claude T’s papers are bereft of any specific deductions he might have had. Claude T’s claim that his family might suffer hardship is for another day.

Here is the decision.

Inflation boosts U.S. household spending by $433 a month, on average, Moody’s finds
The fear of loss can cost investors big-time. Here’s how
Inflation Rates By Country: How Does The U.S. Stack Up?
Elite Private Clubs Seen As Way To Lure Workers Back To Office
Binance, other crypto firms line up bids for bankrupt Voyager Digital after FTX collapse