Shares of flooring company Lumber Liquidators plunged Friday after founder and former CEO Thomas Sullivan decided to opt out of his bid to find a buyer for the company, a week after he announced the buyout plan. Sullivan also sold the majority of his stake in the company.

The founder had upped his ownership of Lumber by 30%, or 500,000 shares on Sept. 4 through his F9 Investments, saying he wanted to take the company private or be an investor in a sale of Lumber Liquidators to another related company. The stock jumped nearly 9% that day and 15% in the following session.

But on Friday, Sullivan sold nearly 80% of his investments, or 1.75 million shares in Lumber Liquidators, according to a regulatory filing. The filing states that because the pop in the shares, he no longer believes it is undervalued. 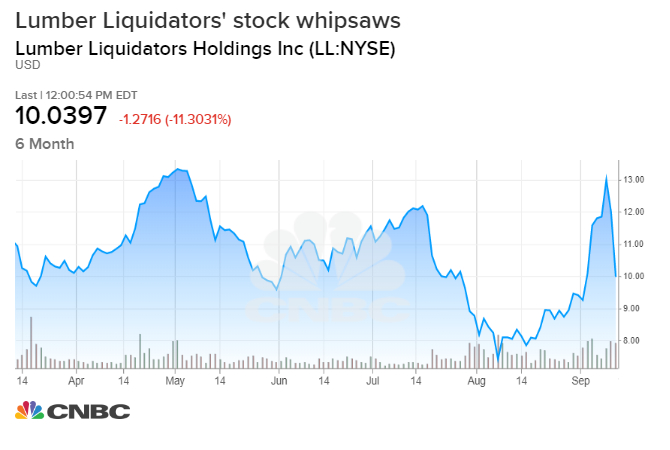 Shares of Lumber Liquidators plunged more than 13% to $9.77 on Friday.

“The Company is aware of Mr. Sullivan’s amended 13D filing and does not comment on the intentions or trading activities of shareholders,” Lumber Liquidators told CNBC. “Lumber Liquidators encourages an active dialogue with all our shareholders, and we welcome their views and input. The Board is always open to opportunities to increase shareholder value.”

The company has been volatile over the years. In 2015, the company took a huge hit when former hedge fund manager Whitney Tilson exposed Lumber’s health and safety violations at its factories in China, which was featured on 60 Minutes.