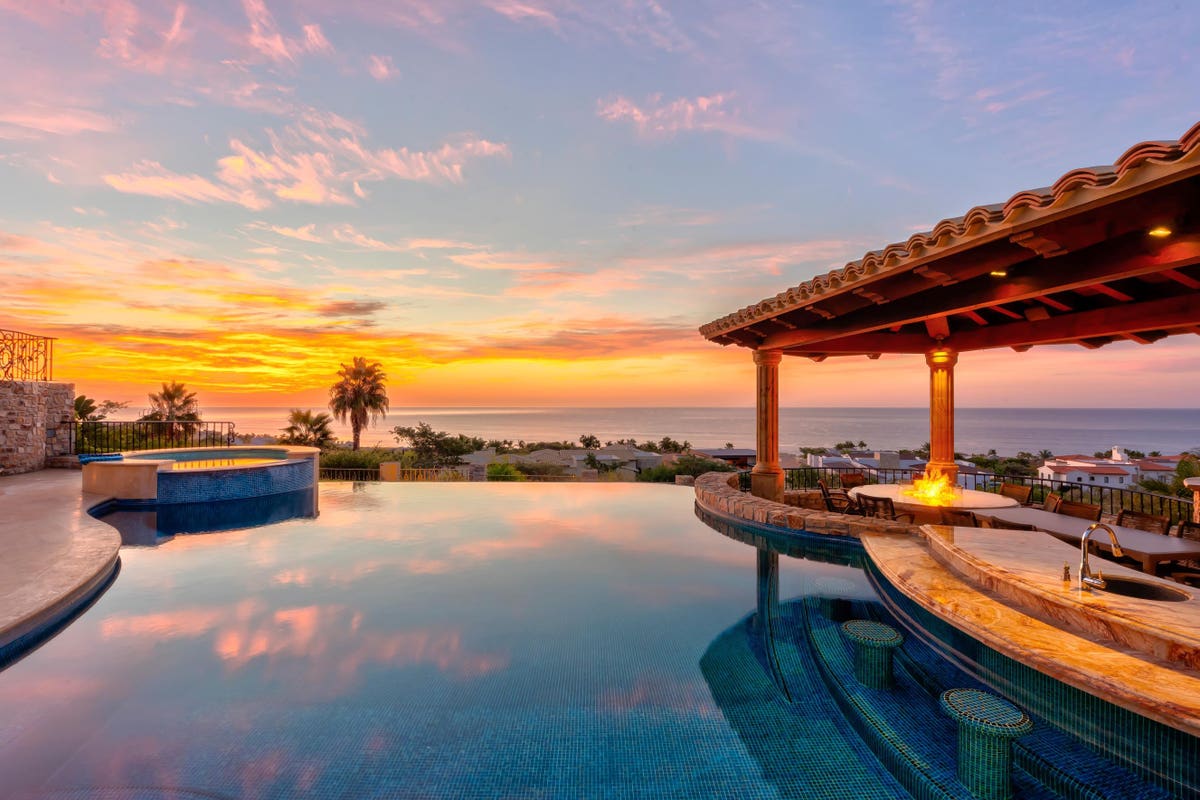 There’s Cabo, and then there’s more Cabo. The Mexico resort destination of Los Cabos, on the southern tip of the Baja California peninsula, is actually made up of two neighboring communities connected by a corridor of luxury resorts offering sun, beaches and watersports.

Cabo San Lucas has a reputation for its nightlife and lively downtown. Quieter San Jose del Cabo is said to be more family friendly and boasts a Colonial old town bathed in traditional Mexican charm.

Facing the plaza in the historic district is the San José missionary church. Art galleries, restaurants and shops sit near the square, which centers on a bandstand.

Designed as an executive retreat, Villa Olivia in San Jose del Cabo is gated and wrapped by perimeter wall of stone and elegant gold-tone wrought iron. Arched windows and doorways, a tile roof and a beamed-ceiling porch add a Mediterranean vibe.

But such details may be easy to overlook in light of the extensive views of the Sea of Cortez that seem to extend off the infinity pool.

The swimming pool features a raised spa and a four-stool swim-up bar with a sink. A covered patio shelters the barbecue area and a firepit.

The nearly 7,500 square feet of interior living space is outfitted with such details as rich woodwork, crown moldings and Egyptian marble floors. When combined with the outdoor spaces, decks and balconies, there’s almost twice as much living area.

Ocean views begin at the domed foyer, which steps down leads to a vaulted ceiling great room. A wood-clad fireplace sits in the living area on one side of the room and the kitchen on the other. The spaces are separated by a dining area and a bar. The kitchen features an island, ceiling beams and a breakfast area.

Architectural details such as wood beams and tray ceilings continue in the seven bedrooms. Several of the 8.5 bathrooms have stand-alone soaking tubs.

A mosaic stone driveway leads to the front door and double garage, where there is also RV parking.

Los Cabos International Airport is about 8 miles away.

2Seas Los Cabos is an exclusive member of Forbes Global Properties, a consumer marketplace and membership network of elite brokerages selling the world’s most luxurious homes.

Watch Fed Chair Powell talk live about the economy, interest rates at ECB forum
It’s Easy To Blame Private Equity For Housing Shortage, But Crisis Has Deeper Roots
Thinking About Medicare Advantage To Escape Part B? Think Again
Some experts say a recession is coming. Here’s how to prepare your portfolio
Houses Are Still Selling Like Hotcakes In These 10 Cities In 2022