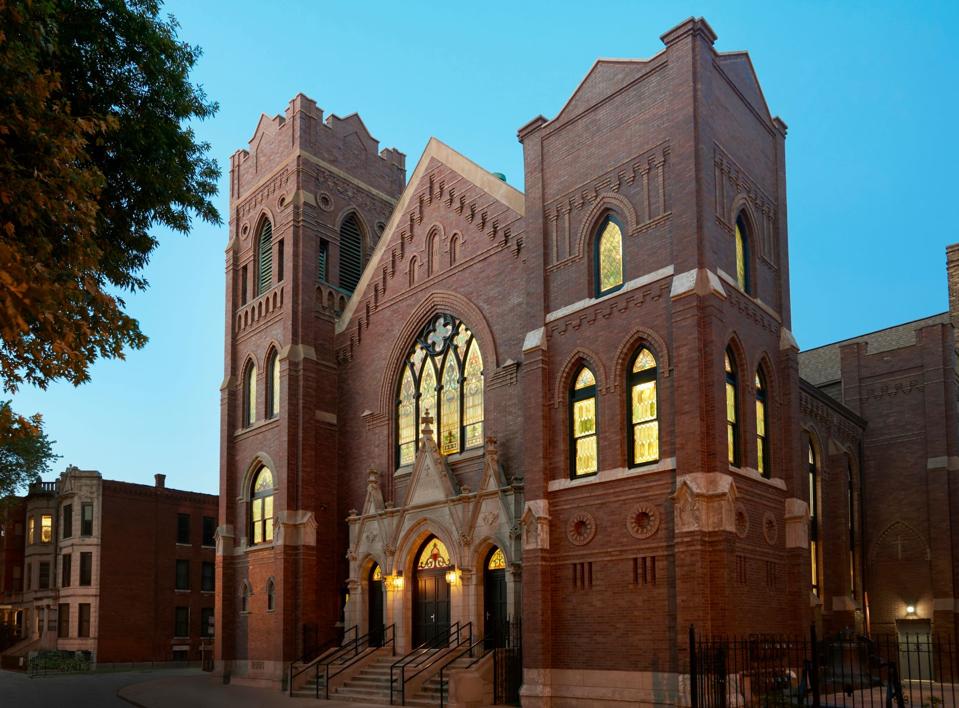 There’s no place like home, especially if it’s a landmark structure. A historic church in Chicago’s Ukrainian Village neighborhood is starting a new life as a luxury condominium development with unique features such as stained glass windows and, yes, a bell tower.

The adaptive reuse and conversion of the landmark St. John’s Evangelical Lutheran Church into The Revival is the result of a meticulous transformation by a team of experienced church restoration specialists, including Chicago-based Emily Carlson of Solstice Art Source, who has 20 years of experience in stained glass restoration. Framing carpenters were brought in from Europe to work on the project.

Situated on a quiet tree-lined street, The Revival transcends its setting. The original church building was built in 1905 by a congregation of German immigrants and designed by two of Chicago’s most accomplished church architects, Henry Worthmann and John Steinbach. The structure features a Gothic Revival design.

Regency Development Group, which bought the property for $1.1 million in 2013, has preserved historic details, including the church’s pointed-arch windows and incorporated them into the new residences. The bell tower is above one unit.

Jodi Serio of @properties, who is the co-listing agent with Maria Troyanovsky, believes the condos are perfect for buyers who have a strong appreciation for great art and architecture.

“This is unlike anything else I’ve sold in my career,” said Serio, noting that the structure is not a typical vanilla box.

It’s easy to see the appeal of the high-end condos. Priced from $579,000 to $1.299 million, the nine units offer single-story and duplex floor plans with three to four bedrooms, two to three bathrooms, 1,585 to 2,375 square feet of living space and an indoor parking garage. Three condos have been sold to date.

To revitalize the building, practically everything was rebuilt. Serio said there is new drywall, electrical wiring and plumbing.

“You have new everything,” she explained. “It’s not like you took a church and retrofitted it into condos. So in terms of the uniqueness factor, you have obviously a church that contains nine units. The aesthetic of the units were done with the mindset of allowing the history of the church to remain. The finishes are kept quiet so to speak. They are contemporary, but they are not taking away from the aspect of the shape of the windows or stained glass, for example.”

Restoring the building was no small undertaking. “All the brickwork, the roof and the complete back of the building was rebricked,” including tuckpointing to repair mortar, said Serio, adding that “when you’re doing a project like this, you’re not using existing church elements. The only thing you’re keeping is the facade. Since it was designated a landmark, the facade had to stay the same.”

Serio believes the brilliance of the The Revival lies in the renovation of the existing structure while holding true to its legacy.

“The developer took exceptional care to hand restore the original details of this project and kept all the aspects of the church in terms of the shape of the windows, the stained glass, the facade,” she said. “The developer took all that into account and was mindful of the selection for the interiors so that each residence was woven into the fabric of the original details. The history will stay, the residents will be new, and the interior elements will be new.”

The penthouse features three bedrooms plus a den and media room, three bathrooms and 2,715 square feet on two levels with 14- and 16-foot ceilings.

Inside each home, original details such as arched windows and exposed brick complement upscale finishes that satisfy the tastes of contemporary buyers.

The Ukrainian Village neighborhood is a mixture of Old World charm and contemporary city living covering an area only about half a square mile.

Serio said The Revival is “unlike anything else,” noting that “it’s a great opportunity for someone to own a piece of this history” and a “very unique project in a tremendous location — a neighborhood with so much history and so many historical homes. I know for sure the neighborhood appreciates the restoration and having this project move forward. People walk by all the time when I’m there, and they are always saying it’s so great that it’s done.”

To schedule a showing or for more information, call 773-257-3775, e-mail therevival@atproperties.com or visit the project website at www.therevivalchicago.com.

Survey Finds That Service Members, Veterans Are Optimistic About Home Buying In 2023
Egg prices rose 60% in 2022. One farm group claims it’s a ‘collusive scheme’ by suppliers
The Most Expensive U.S. Real Estate Sales Of 2022
Tax Cheats, Dodgers, Avoiders, And Evaders
Almost half of Americans think we’re already in a recession. Here’s how to prepare if they’re right