NEW YORK, NY – MAY 13: Traders and financial professionals work ahead of the closing bell on the floor of the New York Stock Exchange (NYSE), May 13, 2019 in New York City.

Markets will rally for the rest of the year, according to J.P. Morgan.

Despite trade war uncertainty, the firm said equities will go up before a potential recession.

“We now believe that (the) market will advance into year-end,” Mislav Matejka, head of global and european equity strategy at J.P. Morgan said in a note to clients Monday.

Markets had a volatile month in August, largely driven by the U.S.-China trade war. The Dow Jones industrial Average had its worst day of the year on Aug. 14 when the bond market’s main yield curve inverted, as investors poured into safe haven bonds while global economic uncertainty reigned. The confluence of low interest rates at home and abroad and a tariff war with China caused a pullback in August, but Mislav said technicals have improved and U.S. stocks will go up. 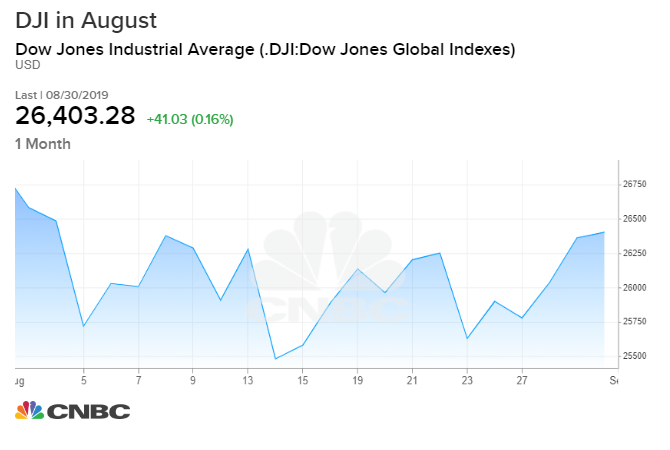 Positives for the market could come from a second rate cut from the Federal Reserve and the restart of the European Central Bank’s quantitative easing, said Mislav.

Historically, if Federal Reserve rate cuts are not followed by a recession, the next three, six and 12 months are strong for equities, Mislav noted.

Although the next move in the trade war is a “wildcard,” the firm thinks “that the hurdle rate for any positive development is quite low now, that the US administration will be sensitive to adverse impacts from trade uncertainty on corporates and on the consumer, and that the latest threats might not be implemented after all,” Mislav wrote.

Mislav also said the firm still favors U.S. equities over European equities. Despite record buybacks, earnings growth is better in the U.S. than the rest of the world, he said.

“Furthermore, the US yield curve has the most scope to re-steepen, compared to the other regions, and the potential peaking in the USD is likely to help US corporate revenues, on margin.”

— with reporting from CNBC’s Michael Bloom