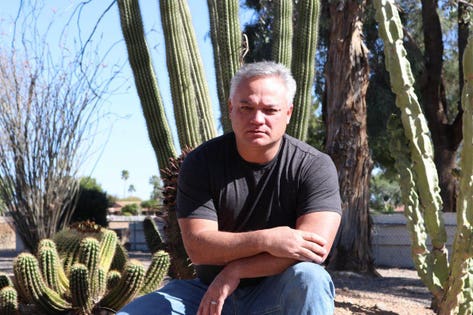 “Who would have thought that a half white/half Korean boy from a lower income, predominantly Hispanic neighborhood would be involved in a tussle with a titan of finance and its army of Ivy League attorneys?” says Johnny Burris.

“I’m no hero,” Johnny Burris told me yesterday. “Fighting a desperate battle against one of the largest banks in the world that has unlimited financial resources doesn’t make me a hero.”

Maybe not, but Burris, a former JP Morgan financial adviser turned corporate whistleblower, has taken a principled stand against what he sees as corporate greed when most would have run for cover. Like many other whistleblowers before him, he has endured sleepless nights and years of personal, professional and financial stress.

That’s heroic, in my mind.

How many people do you know who would risk it all—everything—to do what’s right, moral, or just?

I have investigated corporate wrongdoing for 35 years, been a corporate whistleblower and, as a lawyer, represented whistleblowers. In my experience, almost all individuals faced with blatant unethical dealing or illegality on the part of an employer will choose to do nothing. Perhaps it’s cowardice, a desire to please or avoid confrontation, or a calculated unwillingness to jeopardize one’s career. Whatever the reason, very, very, few choose the difficult whistleblower’s path.

Burris’ claims that he was wrongfully terminated and then defamed in retaliation for refusing to invest more of his clients’ savings in the bank’s high-priced, in-house mutual funds and managed accounts. In other words, he was more concerned with his clients’ financial well-being than his employer’s profits.

(In late 2015, JPMorgan agreed to pay the SEC and CFTC $307 million to settle accusations that it improperly steered clients to the company’s in-house mutual funds and hedge funds. From 2008 to 2015, JPMorgan brokers and financial advisers gave preference to investment products created by the bank’s asset management division when deciding where to invest client money, according to regulators. In some cases, clients were put into higher-cost products, which earned JPMorgan more money, even when the same JPMorgan product was available for a lower fee.)

The twists and turns of Burris’s ongoing whistleblowing journey, including when the firm used false evidence to get rid of him, were recounted recently in an exhaustive FinancialPlanning article so masterfully written by reporter Ann Marsh that I will not attempt to summarize, merely direct readers to the article. Burris’s federal trail is expected to begin later next spring.

Johnny Burris is no stranger to heartbreak and hardship.

His mother was a drug addict who had a tragic life. He recalls visiting her in prison in his youth.

“I do remember her smile and you could see the love in her eyes. One thing was never in doubt, she loved her kids—me and my sister. However, she was unable to break her addiction. Ironically, her death, when I was in my 20s, was unrelated to drug abuse.”

The real heroes of his story, Johnny says, are his dad, Dan Burris (a Vietnam vet awarded a Purple Heart) and his grandparents who raised him.

“Without their love and guidance, I was one bad decision away from a life of addiction. Because my father had to go to work very early (4 a.m.) as a Safeway warehouseman, he would drive me to my grandparents’ house before dawn. They later drove me to school and picked me up every day. When you have limited financial resources, you learn to depend upon others.”

People who make a difference in a kid’s life are the real heroes, says Johnny. “Without them, only God knows where I would be.”

Compassion. Guts. Grit. Sounds like the stuff heroes are made of to me.

“Who would have thought that a half white/half Korean boy from a lower income, predominantly Hispanic neighborhood would be involved in a tussle with a titan of finance and its army of Ivy League attorneys?” said Burris.

I suspect his Dad and grandparents wouldn’t be surprised.