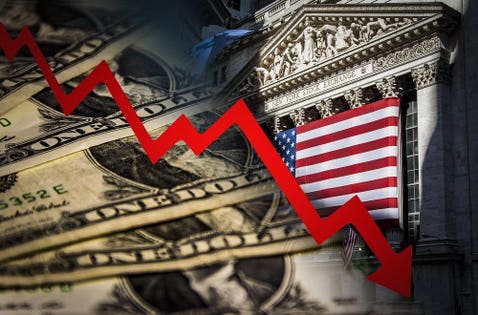 How to invest as the economy cracks

Impeachment talk is flying around social media. Polls are being taken, and so are sides in the battle. But I am here to tell you that as an investor, it is not what matters right now. Because whatever happens in the accelerating impeachment saga, the immediate concern for all investors is the declining global economy.

The latest evidence is out

Again, that headline does not refer to impeachment. I will have more to say about that in this Sunday’s article. As for the global economy, it has been steadily weakening over the past 2 years. As I have written here, the global economic expansion that began back in 2009, including in the United States, probably should have ended back in the first quarter of 2016. All the signs were there.

However, since no one likes a debt party like a central banker, the Federal Reserve Board in the U.S. as well as their equivalents in other major economic regions, once again flooded the market with “cheap” money. They called it QE4, the fourth round of Quantitative Easing. This should have been a case of 3 strikes and you are out. But that, as they say, is history.

This took an economy that had overheated already and kept its enthusiasm from waning. In fact, it started a U.S. stock market surge, which continued after the 2016 U.S. election. The Trump tax cut helped that along, temporarily.

The day the music died, but the party continued

However, by early 2018 (the end of January, specifically), the momentum stopped. My own proprietary indicator of investor reward/risk, the Investment Climate Indicator (ICI), turned decidedly negative at that time. It ushered in a period in which bear market rules apply to investing. That does not mean one sells everything. It does mean they need to think harder about what they are doing with their liquid assets.

Still, from the standpoint of the consumer, all was good in 2018. 20 months later, the stock market is down or flat (depending on which indicator you look at), and the economy is contracting. And still, there appears to be some excitement left in the consumer segment of the economy.

Before you blame the trade war…

On Tuesday, the manufacturing segment told us something else. It told us that after months of turning down, it is now past the point at which it tends to recover, until a recession has come and gone. Many in the media will be quick to point to the era of tariffs and trade wars that have broken out since around the time my own ICI indicator went to “Stormy,” its most dire level, back in January of 2018.

However, I think that the trade angst is only one thing that gave the economy a push toward the cliff, so to speak. Interest rates were too low for too long, and no one reined in the rampant speculation and just plain risk financial decision-making that has occurred in real estate, private equity, student loans, mortgages, credit card debt and more. At some point, the party ends.

Here are charts of 5 components of the so-called “ISM,” that for over 50 years has tracked manufacturing activity in the United States. Readings below 50 mean that part of the economy is in decline. This data takes us from falling to past a breaking point.

Is it a recession?

This may not be a big problem. However, if it isn’t, it would be the first time in decades that this type of slowdown in global manufacturing (pictured above) did not lead to lower stock prices. THAT should get the attention of anyone within 10 years of retirement, or already retired.

I always go back to this basic question: are you investing in the stock and bond markets? Or, are you using those markets as a tool to get what you really want out of the assets you have accumulated? It should be the latter. Otherwise, you are just “playing the market.” And if you are reading this far into this article, you may be too close to retirement to be “playing” when it comes to your money.

Since I cannot use this space to give you specific investment advice, I will instead summarize a few key decisions every investor needs to make now.

On the stock market

Recessions have a way of crushing the major stock indexes. Should I stick with my index fund-dominated portfolio, or start looking to more active, tactical approaches that use the stock market as a means to an end, not the end itself? And, if I change my allocation to stocks, what do I do instead?

On the bond market

This is even trickier for investors now than the stock market decision above. That’s because bond yields are so low, they do not represent nearly as good an alternative to stocks as in the past several recessions. Ask yourself, “do bonds even belong in my long-term investment allocation?” And if so, what type of bonds can weather a recession? And, if you are already retired, the 4-5% rate of bond income you earned from a few years ago can now only be had by investing in “junk” bonds, or at least lower quality than you would prefer in a recession.

On cash and equivalents

Cash investment rates like those on money market funds and CDs are low. However, they are higher than they have been for most of the past decade. That 1-2% yield probably won’t replace your current income in retirement. And we don’t know when that will change. And when it does, will inflation eat up all of that return? The bottom-line is that cash can be a nice alternative for a little while. But do you know that what you think is principal-stable is truly that? This was a BIG issue in the last recession.

There are many definitions of an alternative. Ask yourself very simply “do I know what I own here?”.  So much of Wall Street ingenuity has taken place in the past decade. However, much of it is untested in a sustained period of market weakness.

Ask yourself: are you still in love?

It is a great time to re-examine everything you own. Ask yourself a very simple question about each part of your portfolio, and the overall strategy you used to create and monitor it. That question is “would I buy this today?” Do I still love that I own it? If the answer is no, you have some thinking to do. Because every portfolio holding today should have a purpose attached to it.

Even in the portfolios I manage, when markets look weak I usually still own stocks. Why? Because an all-or-nothing approach to investing is a big risk in itself. And, the entire stock market cannot be painted with the same brush.

A time to succeed…if you are ready

Perhaps more significantly, I have found that environments like this can still reward investors. They just need to be ready, willing and able to adapt to the new realities. That is, things like shorter holding periods and lots of volatility. And, to approach this phase of the market cycle with a contrarian mindset that helps us weather the storm, and even exploit it to our benefit.

We’ll have plenty of time to talk about the impact of impeachment on investing. For me, that will start with this Sunday’s article here at Forbes.com. For now, it is best to deal with the “story” that as of Wednesday, has reached a new level of maturation: the global economy is declining, not rising.

These 10 cars have the greatest potential lifespan — and 6 are Toyotas
Stocks making the biggest moves premarket: Marvell Technology, Horizon Therapeutics, DoorDash and more
Man behind the Korean wave talks about the future of K-pop and what aspiring artistes can do
Stocks making the biggest moves premarket: Silvergate Capital, MGM Resorts, Bilibili, Murphy Oil & more
Consider These 4 End Of Year Small Business Tax Moves