The cost of care has become so onerous that some people have ditched going to the doctor altogether.

To save on health care, a third of people aged 25 to 45 avoided seeing a medical professional, hoping instead that their condition will eventually resolve, according to data from the Nationwide Retirement Institute.

The institute performed an online poll of 1,000 adults in that age cohort in July.

Close to 3 in 10 of the participants said they considered not seeking care to avoid their high deductibles, while about 20% said they stretched their prescription drugs by taking less than the recommended dosage.

“Health care is one of the top reasons why people go into bankruptcy,” said Kristi Rodriguez, leader of the Nationwide Retirement Institute.

Indeed, a March 2019 study in the American Public Journal of Health found that about  two-thirds of all bankruptcies were related to medical problems.

Annually, 530,000 families file for bankruptcy due to health-care issues and bills, according to the research.

While employers chip in a substantial amount of premium contributions for workplace health plans, workers are still on the hook for a big portion.

In 2018, employers paid an average of $15,159 in premiums to cover a family of four, according to data from the Kaiser Family Foundation. 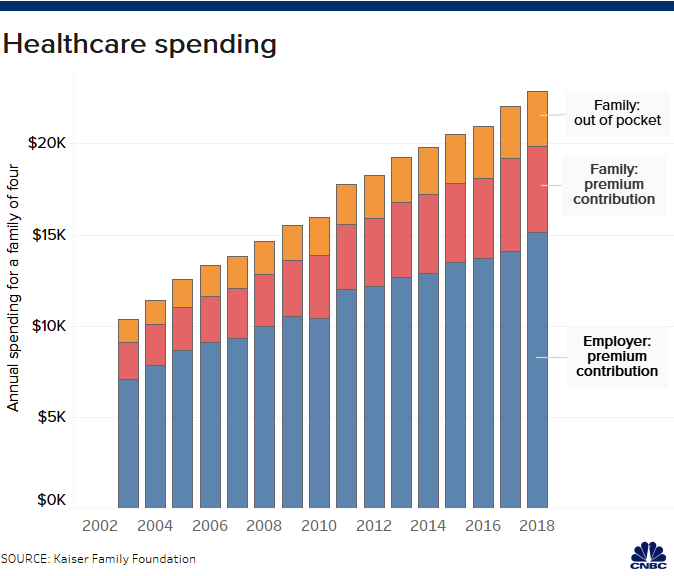 Meanwhile, workers paid an average of $4,706 in premiums to provide coverage to their families and they spent an average of $3,020 in out-of-pocket expenses, including meeting deductibles, copayments and coinsurance.

Employers have sought to share more costs with workers through high-deductible health plans.

Close to 9 out of 10 employers anticipate offering these plans next year, according to data from the National Business Group on Health.

These plans typically are paired with a health savings account (HSA) — where workers can save tax-deductible or pretax dollars, have them grow free of tax and then withdraw them tax-free for qualified medical expenses.

People with single coverage can contribute up to $3,550 in 2020, while participants with family coverage can sock away up to $7,100.

More from Personal Finance:
Here are the best and worst US cities for retirement
This fix to public service loan forgiveness hasn’t helped much
More than half of parents blew their summer budgets

Bear in mind, these plans generally come with higher consumer costs before coverage kicks in.

The IRS defines a high-deductible plan in 2020 as having an annual deductible of at least $1,400 for self-only coverage or $2,800 for family plans.

Only 17% of people polled by Nationwide said they participate in HSAs.

Among those who have an HSA, 25% use it to cover current health-care costs, rather than allowing the balance to accumulate year over year, Nationwide found.

“There is a clear opportunity for further education around and greater adoption of HSAs among younger and older adults,” said Rodriguez.