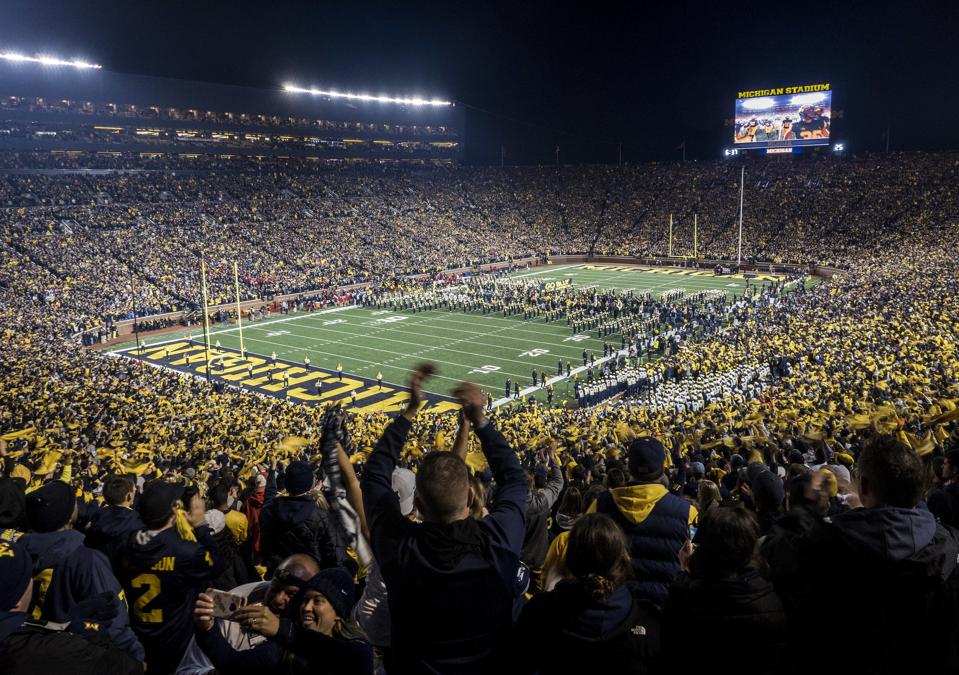 When it comes to college football, there’s no price too high for fan loyalty.

Last year, fans in the SEC conference reportedly dropped between $1,212 and $4,232 (depending on their team) on everything from tickets to food and merchandise. However, when factoring in hotel prices, the average spend got as high as $6,200 per fan–a nearly $2,000 premium.

Which begs the question: how much exactly could a savvy homeowner make renting their house? After all, with the NCAA reporting roughly 47 million football fans attending games last year, there’s certainly no shortage of people needing places to stay.

To answer the question I looked at 2018 data from home rental site Vrbo, to see what the most lucrative home-rental rates were for college towns on weekends with games. The top 10 are as follows:

The rental boost for game nights (compared to normal weekends) ranged from 20% on the low end for the Razorbacks in Fayetteville, to a whopping 181% for the Wolverines in Ann Arbor. In South Bend and Blacksburg, just one night’s rental was high enough to cover a whole month’s rent.

Beyond the standard game day boost, every school also had “premium” games–typically with rival teams–that could fetch up to 26% higher rates than average games.  For instance, the Ohio State vs. Penn State game last year pulled in $925 per night in College Station, compared to an average of $726 for other game nights. Other notable premium games were Auburn at Ole Miss ($780), and Wisconsin at Michigan ($925).

Unsurprisingly, big schools dominated the list, with the SEC conference accounting for 5 of the top 10 spots. However, neither school size nor team popularity fully accounted for a town’s rental price.

For instance, while the University of Michigan ranked highest in attendance nationwide last year (“The Big House” stadium notoriously holding 115,000 people), it was still edged out by Notre Dame in South Bend–which only ranked 15th in attendance (which a stadium capacity of roughly 81,000). Oxford, Mississippi (home to Ole Miss) ranked 7th on our list, despite coming in dead last for attendance among all 30 FBS teams.

One obvious explanation for this discrepancy is town size. While Ole Miss has one of the smaller stadiums on our list, its 64,038 capacity is still roughly three times the size of the town’s year round population. Similarly, while Virginia Tech ranked near the bottom for attendance among FBS teams, its town’s population is roughly half that of its stadium size.

Yet it appears it’s not just hotel availability that’s a factor, but hotel desire. For instance, while home rentals have been hugely popular in South Bend, local hotels have actually experienced difficulty selling their inventory.

“Over the last 4 years, it has become much more difficult to sell out,” says Kim Allsop, President of the St. Joseph County Hotel and Motel Association. “For the 2019 season, we are finding the rival games sold out, however, many rooms [are] available for the remainder of this season.”

This preference for a “home” experience over a traditional hotel accommodation is increasingly common, and several hotel chains have already begun adapting their inventory to include home-like rentals. This preference is theoretically even more pronounced for college games, which double as popular destinations for family get-togethers and alumni gatherings.

“On average, vacation rentals offer more space, privacy and amenities than hotel rooms, which is ideal when traveling with family or a group of old college friends,” says Alison Kwong, vacation rental expert at Vrbo. “Having a kitchen, living room with a large TV and backyard is more convenient and comfortable when traveling as a group because everyone can stay together and relax when they’re not at the game.”

While the exact relationship between town size, stadium attendance and home rental demand may never be known, one thing is certain for homeowners: if the local stadium is full, your wallet can be too.