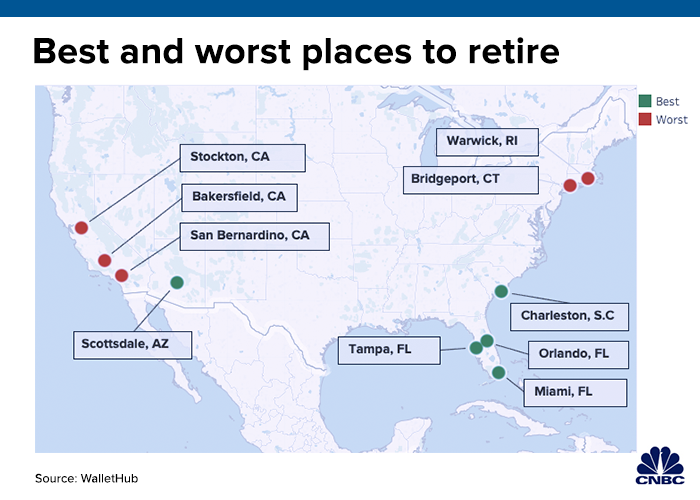 Just under a quarter of Americans are “very confident” they’ll have enough money to retire comfortably. And many expect to delay retirement at least until age 65, according to recent studies.

So what’s a person who’s ready to call it quits at the office to do? Relocating to more affordable climes is one option.

Personal finance website WalletHub has ranked 182 U.S. cities by retiree-friendliness as part of its 2019’s Best & Worst Places to Retire report. The study compared the cities across 46 key metrics, ranging from cost of living and quality of local health care to retired taxpayer-friendliness, crime rates and availability of recreational activities.

More from Personal Finance:
This could take a big bite out of your nest egg
Retiring early? These 10 US cities could be your best bet
Here’s how more Americans can save for retirement

Roughly speaking, the top cities for retirees tended to be located in Southeastern or Mountain states, while those ranking last seemed to be clustered in California and the Northeast. The latter regions tend to have higher housing costs and taxes, which can impact seniors living on fixed incomes more severely.

Some key findings about the cities surveyed included:

Here are the top five best cities for retirees, followed by the five worst (with No. 1 being worst), according to WalletHub:

For the full WalletHub report and ranking, along with the methodology used, go to https://wallethub.com/edu/best-places-to-retire/6165.