Traders and financial professionals work on the floor of the New York Stock Exchange (NYSE) at the opening bell on August 19, 2019 in New York City.

The market is inches away from reclaiming its all-time highs on renewed trade hopes, but things can change on a dime in this headline-sensitive environment.

“We believe the heightened levels of volatility that investors were forced to contend with last month will likely return in the coming months, and is one of the reasons we do not see U.S. stocks breaking out of their range and making a sustained move higher before the year is done,” Brian Belski, BMO’s chief investment strategist said in a note on Thursday.

Take August. The S&P 500, which just hit its record high at the end of July, tumbled 5% in just one week after President Donald Trump abruptly slapped additional tariffs on Chinese goods. Back then, it took just four brutal trading days for a $1.4 trillion wipeout in the S&P 500 stock value. 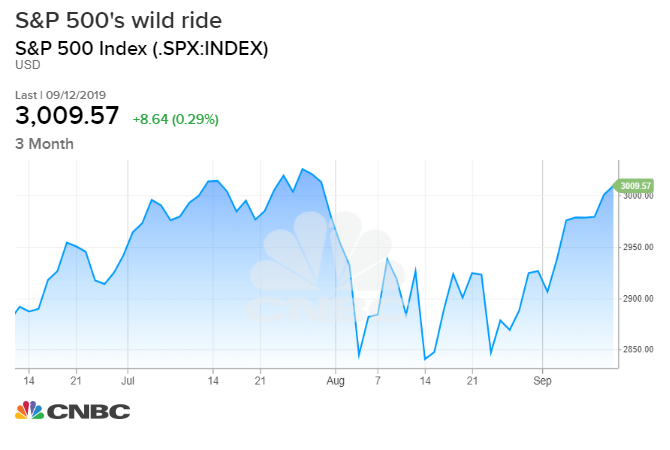 “It is important to remember that in this volatile, headline-driven market filled with uncertainty, things can change in an instant, just as they did in August,” Belski said.

The Dow Jones Industrial Average is about to post its 8th straight day of gains on Friday as the U.S. and China eased tensions ahead of trade talks next month. Trump delayed some tariffs on Chinese goods for two weeks and said he would consider an interim trade deal, while China announced a list of U.S. products that will be exempt from tariffs, including soybeans.

Belski is recommending buying “low risk” stocks as he bets on a sudden drop in equities in the next few months.

BMO’s low risk factor focuses on stocks with low short interest, stable income and prices. The group has performed better than typical defensive stocks in an up market and it is the only outperforming factor in BMO’s category this year.

The basket is about 30% in utilities, but also includes financials (Bank of America, Morgan Stanley and Citigroup) and information technology stocks (Amazon and Micro Technology). Insurers Humana and Baxter International and Tyson Foods are also in BMO’s low risk group.