Traders work after the closing bell at the New York Stock Exchange (NYSE) on August 12, 2019 at Wall Street in New York City.

For investors taking a breather from the chaos in August, buckle up as the market is about to go crazy again, Goldman Sachs warned.

Wall Street is now inches away from reclaiming its record highs, but a rockier ride could be around the corner as stock volatility has been 25% higher in October on average since 1928, according to Goldman. Big price swings have been seen in each major stock benchmark and sector in October over the past 30 years with technology and health care being the most volatile groups, Goldman said.

“We believe high October volatility is more than just a coincidence,” Goldman’s equity derivatives strategist John Marshall said in a note on Friday. “We believe it is a critical period for many investors and companies that manage performance to calendar year-end.”

The Cboe Volatility Index, a measure of the 30-day implied volatility of U.S. stocks also known as the VIX or “fear gauge,” has been tame this month as trade tensions between the U.S. and China eased and Treasury yields bounced back from their historic lows. 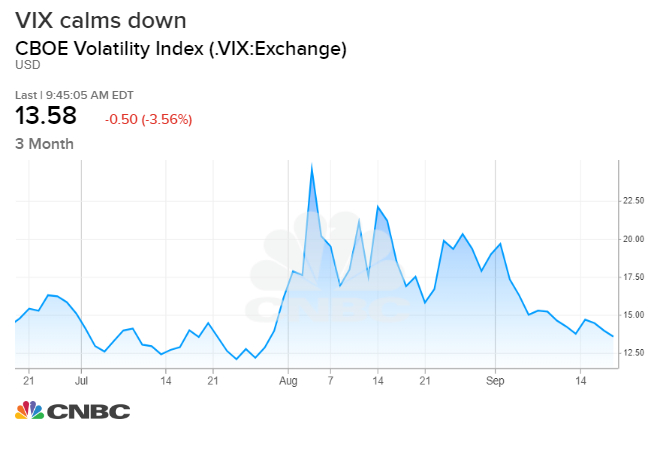 But things could get chaotic again as earnings season kicks off, which should exacerbate a shift in investor sentiment.

Seasonality is also strong in single stock volatility as earnings and other events tend to lead to bigger moves, the strategist noted.

The VIX swung to its highest level of the year in August as the trade war escalated, fanning fears of a recession. The Dow Jones Industrial Average suffered its worst day of the year on Aug. 14 when the bond markets flashed its biggest recession signal.