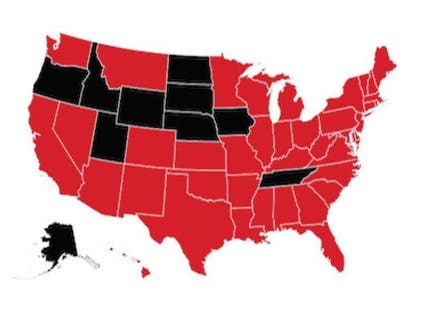 Truth in Accounting, Financial State of the States

Forty U.S. states do not have enough money to pay all their bills primarily due to significant unfunded pensions or Other-Post-Employment Benefits (OPEB). Truth in Accounting (TIA), a nonpartisan, not-for-profit has been monitoring the financial health of states for a decade in order to educate taxpayers about the financial health of their states today released its tenth annual Financial State of the States. Since I published “Forty U.S. States Cannot Afford To Pay All Their Bills” last year, total U.S. states debt decreased slightly, less than 1%, from $1.5 trillion at the end of the fiscal year 2017, to $1.49 trillion in fiscal year 2018. Truth in Accounting’s 2018 data shows that unfunded retirement liabilities are the main contributing factor to the almost $1.5 trillion in state-level debt. Unfortunately, “one of the ways states make their budgets look balanced is by shortchanging public pension and OPEB [other post-employment benefit] funds. This practice has resulted in a $824 billion shortfall in pension funds and a $664.6 billion shortfall in OPEB funds.”

Despite the fact that the total U.S. economy is still growing, states have not been able to lower their unfunded liabilities. This is not good news given that the rate of growth in the U.S. is starting to slow down, and many U.S. states’ fiscal health continues to be very vulnerable to Trump’s trade wars.  According to TIA Founder and CEO Sheila Weinberg,  “Many of these state governments have no hope of achieving a budget recovery barring significant program cuts or tax hikes,” says. “This crisis has been years in the making and demands political courage on the part of voters and elected officials to return to the path of sustainability.”

The Volcker Alliance, a nonpartisan organization that promotes effective government management, has an annual report, Truth and Integrity in State Budgeting: Preventing the Next Fiscal Crisis, which findings concur with many of Truth in Accounting’s findings.  “Many states still struggle to balance budgets in the face of mounting obligations for health care, infrastructure, education, and public employee retirement costs.”  The Volcker Alliance recommends that states need to do much better budgeting to prevent a fiscal crisis.

In its latest report, TIA ranks each state based on its Taxpayer Burden or Taxpayer Surplus. TIA defines a Taxpayer Burden as “the amount of money each taxpayer would have to contribute if the state were to pay all of its debt accumulated to date. Conversely, a Taxpayer Surplus is the amount of money left over after all of a state’s bills are paid, divided by the estimated number of taxpayers in the state. We split the states into two groups. States that lack the necessary funds to pay their bills are called Sinkhole States, while those that do have enough money are referred to as Sunshine States.”

Alaska, North Dakota, Wyoming, Utah, and Idaho are the Top Sunshine States, since they have a surplus per each of their states’ taxpayers.

Unfortunately, there are also sinkhole states where taxpayers are on the hook for the bills that the state cannot pay. New Jersey, by far is in the weakest condition.

TIA’s report explains that “By definition, if a state has a balanced budget requirement, then spending should be equal to revenue brought in during a specific year. Unfortunately, in the world of government accounting, things are often not as they appear.  Every state, except for Vermont, has balanced budget requirements, yet even with these rules in place, states have accumulated more than $1.5 trillion in debt.”  States are able to rack up debt and balance their budgets simultaneously, because they use a number of accounting tricks such as:

TIA also grades states from A – F based on their financial health and how much they leave their residents on the hook for unfunded liabilities. Only Alaska, North Dakota and Wyoming had an A.  44% of the states have a D or an F. Nine states — New York, California, Kentucky, Delaware, Hawaii, Massachusetts, Connecticut, Illinois, and New Jersey — all had the failing grade of F.

The residents who live in states with a D, and especially an F need to be thinking of how we can push our legislators to implement policies to improve the financial health of our states. Unless state legislators can find a way to improve our states’ financial health, ll of us will have to pay more taxes, receive less in services, or both. Or legislators will kick the can down the road for the generations who follow us.