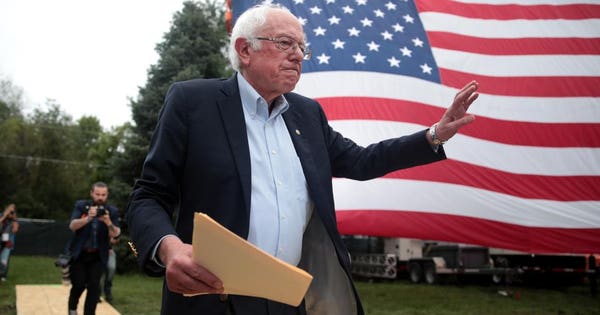 This week, presidential candidate Sen. Bernie Sanders unveiled his latest plan to recoup funds from our wealthiest citizens. For the country’s more than 60 million gig workers, who endure some of the lowest pay and levels of support in our workforce, it could also be a great first step toward improving quality of life for decades to come.

On Tuesday, Sen. Sanders released his plan for an “Extreme Wealth Tax,” designed to help bring just some of the concentrated wealth held by our very richest few back into systems for supporting the rest of us, such as affordable housing, universal childcare, and Medicare for All.

“At a time when millions of Americans are working two or three jobs to feed their families, the three wealthiest people in this country own more wealth than the bottom half of the American people,” the Sanders campaign explained on its website. “In order to reduce the outrageous level of inequality that exists in America today and to rebuild the disappearing middle class, the time has come for the United States to establish an annual tax on the extreme wealth of the top 0.1 percent of U.S. households.”

The proposed tax would only apply to individuals with a net worth over $32 million, starting at 1% annually for married couples, and rising gradually for even higher net worths.

See also: Gigs And AI Are Driving Us Into Digital Servitude

According to Sanders—who’s been on record promoting a wealth tax since 1997, and formally introduced such a plan in 2017—his latest version would raise an estimated $4.35 trillion over the next decade. It would also “cut in half” the wealth of the nation’s few billionaires in 15 years, serving to “substantially break up the concentration of wealth and power of this small privileged class,” his campaign wrote.

It would be constitutional, and it would be fair, according to Sanders. It could help also the rising number of contract and gig workers in our country to get the support and services that they and their families need desperately right now—myself included.

A demonstrator holds by a sign that say “Booo The Gig Economy” during a march to support gig-economy workers near the the Court of Appeal in London, U.K., on Tuesday, Oct. 30, 2018. (Photographer: Simon Dawson/Bloomberg)

For our growing gig and contract workforce, which is estimated to include a majority of US workers by 2027, life in 2019 is often a strictly hand-to-mouth affair.

We receive some of the lowest rates of pay in the nation, have little or no job security, and must cover many or all of our professional and personal costs up front: our vehicles and other equipment, for example, and our physical and mental healthcare costs, and our estimated tax payments throughout the year.

Many of us don’t have savings, let alone retirement plans or 401ks, and those who do get ahead tend to occupy the highest rungs of the contractor ladder—folks like Ivy League adjunct instructors, and magazine “staff” writers, and only the best-established artists and creators, who may still have to juggle two or three different gigs.

As a group, we struggle to pay for childcare, housing, and the tools we need to perform our work (energizing food included). In both our job areas and the nation as a whole, we also broadly lack representation and agency, which have become ever more closely tied to wealth itself, as The Economist noted last year. We’re often paid irregularly, too, or sometimes not at all.

In recent years, we’ve also seen plenty of glaring examples of how gig workers at the bottom of their industries occupy a different financial universe, in effect, from those few at the top.

While Uber (and Lyft, and Juno) drivers have dealt with rising costs and falling pay, for example, the company was reportedly spending $200,000 a year on balloons, and burning billions every year to expand and maintain its operations—money that’s often been invested by some of the world’s richest individuals and companies, but also financial management firms under their control, which draw from billionaires but also regular folks’ retirement funds.

At Amazon, which is helmed by someone who’s (usually) considered the richest man in the world and in modern history, contract workers in multiple countries have increasingly called for better treatment, fair representation, and a living wage.

The list goes on, and it’s not news. For decades, US wealth has been traveling upward at a fairly unchecked pace, and at this point, the proportional distribution of wealth in our nation and world makes absolutely no sense—that is, if money is still considered a means of allowing individuals to exchange their labor and participation in society for the resources they need to survive.

Two IBEW Local 3 Spectrum technicians, who have been on strike for one year at the time of this photo, display their signs outside Spectrum’s head offices in New York City on March 28, 2018. (Credit: Janet Burns)

We now know that numerous previous methods for trying to redistribute US wealth into some sort of functional proportion just haven’t worked, from trickle-down economics to our most likely slightly regressive social security program.

For example, if we’d had the foresight to implement a more substantial wealth tax a few decades ago, “The share of wealth owned by the Forbes 400 would not have exploded and would only be slightly higher than it was in the early 1980s,” said economists Gabriel Zucman and Emmanuel Saez, who analyzed the proposal on behalf of the campaign, in a statement. “The current top 15 wealthiest Americans would own $196 billion (instead of the $943 billion they own in 2018).”

As a country, we also seem more than ready to take more definitive steps, including through a new kind of wealth tax.

“It’s a really interesting time,” said Natalie Foster, co-chair of the privately funded Economic Security Project, which advocates for cash injections for Americans alongside “robust” social services, in a phone interview this week. “All the things that we want as a country will take money, and the energy growing around a wealth tax, specifically on extreme wealth, is exciting.”

The group’s co-founder and co-chair, Facebook co-founder Chris Hughes, feels the same way: like Abigail Disney and a growing number of other super-rich US residents, Hughes has called for substantially higher taxes on his own income bracket, having recognized that, beyond a certain point, large accumulations of wealth are not only unnecessary for the few, but destructive to the many.

“We’re seeing more politicians respond to this call from people whose wages have been stagnating for 50 years, but also from some of the wealthiest ones,” Foster said. “We’re also asking ourselves, what kind of country do we want to live in, and what rights do we think people have?”

See also: The Delivery War Is Reckless And Vain

In the mean time, work itself is changing “in very precarious ways” in our country, Foster said. “We’re losing more and more traditional jobs to seasonal and on-demand ones. It makes sense that a wealth tax would help re-balance what is out of whack with capitalism in America today.”

Foster, whose group supports an expanded Earned Income Tax Credit (EIC) in the US as well as a form of universal basic income (preferably as “unlimited cash”), pointed to a January New York Times article by economist Paul Krugman, which describes the “diminishing marginal utility” of each extra dollar that gets added to an already huge pile of wealth.

By contrast, among the families who’ve participated in universal basic income (UBI)-type experiments her group has studied or overseen, “The utility [of additional modest funds] is very clear, in early data,” Foster said. “Low-income people can really put those dollars to work.”

With regard to the challenges faced by today’s gig and contract workers, Foster said,  “We should not have to choose between stability and freedom.”

“We can do both: we can give people stability and flexibility,” she continued. “This is not a math problem. It’s a political one.”

But for now, math problems remain very much a reality for our nation’s low-paid gig and contract workers, who must make painstaking financial decisions every day. With a little extra cash, or additional social services, many of us might not have to struggle so much over what should be simple choices, or could even invest in the little things that can make life a whole lot better.

If I had an extra hundred bucks after next month’s rent, for example, I’d buy tires, a new chain, and a helmet for the old bicycle that a friend, who had to leave New York City, left behind; I’ve wanted a bike for a while. I’d use that bicycle to save on bus and subway fare in Brooklyn (which I already do, when the weather allows, by walking) and for fun and exercise, which helps to stave off my clinical depression and let me do my job better.

If I had an extra $2000, I’d get myself a root canal and crown (which Medicaid, a generally fabulous program, doesn’t cover for adults) and pay off several hundred dollars in late fees to the IRS, which I owe after managing to pay off more than $2400 in freelance back taxes, thanks to a loan from my family. I’d also buy some new (used) jeans, and stock up on groceries and cat food. In short, I’d put that money to work.

For now, though, I’ll keep going for walks, paying attention, and talking to my neighbors and my four roommates about the change we want to see—all activities which, thankfully, are free.

Jim Chanos: Bear market is doing something unheard of in my career
Social Security, Medicare should be ‘off the table’ in debt ceiling talks, McCarthy says
The Fed Is Poised To Hike Interest Rates Again – Is It Enough To Keep Away A Recession?
Showtime to combine with Paramount+, rebrand with new name
Ask Larry: When Should I Switch To My Social Security Retirement Benefits?