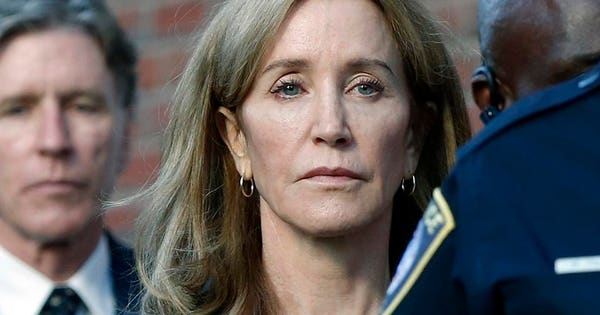 Here’s what you need to know.

Huffman, an Oscar-nominated actress and a star of Desperate Housewives, will serve 14 days in jail for her role in the largest college admissions scandal in U.S. history. Huffman, 56, will report to prison on October 25, and the Bureau of Prisons will decide the facility.

U.S. District Judge Indira Talwani also ruled that Huffman will serve one year probation, pay a $30,000 fine and perform 250 hours of community service. Huffman pleaded guilty in May to one charge of conspiracy to commit mail fraud and honest services mail fraud.

U.S. Attorney Andrew Lelling recommended earlier this month that Huffman serve one month in prison, serve 12 months of supervised release and pay a $20,000 fine. Huffman’s attorneys asked for one year of probation, 250 hours of community service with an at-risk youth organization and a $20,000 fine.

Prosecutors allege that Huffman paid an admissions consultant, William “Rick” Singer, $15,000 – which she allegedly disguised as a charitable contribution to Singer’s non-profit foundation - in exchange for helping change answers on her daughter’s SAT exam. Huffman is not the only defendant charged. Prosecutors have charged parents, college administrators, college coaches and others who allegedly were part of a scheme to gain illicit favor in the college admissions process. While Huffman is the first parent to be sentenced in connection with the case, her sentence may shed light on how future defendants may be sentenced.

Huffman accepted full responsibility for her actions and accepted the court’s decision:

“I accept the court’s decision today without reservation. I have always been prepared to accept whatever punishment Judge Talwani imposed. I broke the law. I have admitted that and I pleaded guilty to this crime. There are no excuses or justifications for my actions. Period.”

“I would like to apologize again to my daughter, my husband, my family and the educational community for my actions. And I especially want to apologize to the students who work hard every day to get into college, and to their parents who make tremendous sacrifices supporting their children.”

“I have learned a lot over the last six months about my flaws as a person. My goal now is to serve the sentence that the court has given me. I look forward to doing my community service hours and making a positive impact on my community. I also plan to continue making contributions wherever I can well after those service hours are completed.”

“I can promise you that in the months and years to come that I will try and live a more honest life, serve as a better role model for my daughters and family and continue to contribute my time and energies wherever I am needed.”

“My hope now is that my family, my friends and my community will forgive me for my actions.”

Huffman submitted to the judge more than two dozen letters of support, including from husband and actor William H. Macy and former co-star Eva Longoria.

Singer, based in Newport Beach, California, is the college counselor at the center of the alleged scheme, and apparently had more than 700 clients. There is no indication that all his clients participated in the alleged scheme. Singer operated the for-profit counseling and admissions company The Edge College & Career Network and the nonprofit organization The Key World Foundation.

In some cases, Singer allegedly had a third party take, or change answers to, the SAT or ACT exams for students, or Singer would conspire with athletic coaches to fake athletic credentials for non-athletic recruits to help them gain admission to college. Singer has pleaded guilty to racketeering conspiracy, money laundering, tax conspiracy and obstruction of justice. He faces up to 65 years in jail and a $1.25 million fine. Singer, who was released on $500,000 bond, cooperated with the Justice Department and FBI by wearing a wire, and implicating others named in the indictment.

It’s been a volatile year for the market: These are the key things to know before rebalancing your portfolio
Tesla is still dominant, but its U.S. market share is eroding as cheaper EVs arrive
$8.5 Million Santa Fe Mansion Honors New Mexico’s Classic Architecture
Why Amazon CEO Andy Jassy didn’t immediately say ‘yes’ when Jeff Bezos offered him the role
Consider These 4 End Of Year Small Business Tax Moves