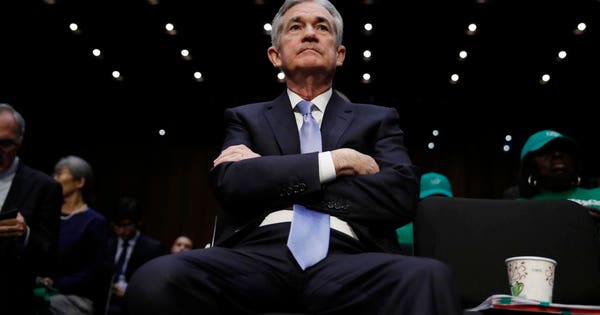 In this 2017 file photo, Jerome Powell, before being confirmed as chairman of the Federal Reserve, sits in the audience waiting to testify during a Senate Banking, Housing, and Urban Affairs Committee confirmation hearing on Capitol Hill in Washington. (AP Photo/Carolyn Kaster, File)

I hope Jerome Powell shows some backbone at the next Federal Open Market Committee (FOMC) and doesn’t change interest rates.

Powell, the chairman of the Federal Reserve Bank, will head a meeting next month of the FOMC, the Fed’s policy body. The FOMC essentially decides whether to increase or cut the federal funds rate in order to give the economy a push in a certain direction. Cutting rates is supposed to put more money into the economy.

In July, the FOMC cut the federal fund’s rate, basically the nation’s interest rate, by a quarter percentage point (0.25) to bring the rate down to a range of 2% to 2.25%.

There really wasn’t much need for a rate cut, but the stock market had had been volatile on rising trade tensions and a slowdown in global growth. The interest rate on the 10-year U.S. Treasury bond, the market benchmark, forecast a rate cut, and many traders and pundits were calling for a full percentage point of cuts as insurance for the economy.

On top of that, President Trump had been berating Powell on Twitter, saying that he was too slow in cutting rates.

So, Powell cut rates. To someone who follows this story, it seemed to me as if he had been bullied into it by both the president and the market.

He called the rate cut an insurance policy against potential speed bumps for the economy.

“The outlook for the U.S. economy remains favorable and this action is designed to support that outlook,” said Powell.

During the announcement, the Fed Chair called the move a “mid-cycle adjustment to policy,’’ not the first in a long series of moves.

The message to the market was, “This is one and done.”

But this month trade tensions continue to affect the global economy. For the most part, the world is calm, but the President Trump is roiling the global economy because of a trade dispute between the U.S. and China.

On Sept. 1, the third round of Trump’s tariffs will go into effect. About $300 billion in annual goods imports from China will be hit with a 15% tariff.

Many people applaud the president with addressing our trade issues with China, but many think his approach is counterproductive. Currently, the tariffs are hurting U.S. agriculture, because China is refusing to buy agricultural goods. In response, Trump imposed new tariffs that will take effect Sunday. This will begin to hurt consumers, as the tariffs will hit electronics and clothing.

In anticipation of these new tariffs, the stock market has been going up and down like a roller coaster. This caused the president to say the Fed is the “only problem” with the economy. He called Powell a “golfer who can’t putt.” He also tweeted a question asking who was the bigger enemy to the U.S., Powell or Chinese President Xi Jinping?

Trump is once again making a lot of noise, bullying Powell into saving him from his own mistakes.

The Fed has two mandates: 1) to keep inflation in check and 2) full employment. With unemployment near 50-year lows and inflation unable to break 2%, the Fed looks like its doing a good job. With these two data points looking good, Trump refuses to see that his policies are the problem.

Basically tariffs are a tax on the U.S. population, because we pay the increase.

Trump seems like a man moving chess pieces without knowing the rules of the game. Trump wanted to hurt the Chinese, but had he understood how tariffs work, he’d know that he’d be hurting Americans more. He’s taking unnecessary risks with the economy.

If he were able to admit he’d made a mistake and call off the tariffs, he could probably bring the economy back to an even keel. But that seems unlikely and global growth suffers with the potential to spread to the U.S.

So, the president continues to scream at the Fed Chair, “Do something! Fix this!”

The problem with this scenario is that cutting interest rates won’t solve the trade dispute or the effects of the tariffs.

Cutting rates is supposed to make money cheaper to borrow, which can then be invested in companies and the economy.

But there’s no liquidity problem. Money is pretty cheap right now, and it hasn’t been sparking capital investment. The reason is corporate chieftains like to invest in an environment where they have some idea of what the future should hold. But with a president who can issue conflicting orders in the same day, these business leaders have no idea what kind of environment they are investing in. And roiling the markets and sparking fears of a recession, cause companies to hold onto cash in preparation of a rainy day.

So, making money cheap isn’t going to fix this.

Powell said as much at a gathering of central bankers in Jackson Hole, Wyoming, earlier this month. He said the White House’s trade policies are a big problem for the Fed.

But Trump won’t hear it. The economic warning signs are getting louder and Trump is looking for someone to blame, even though he probably knows deep down, he’s at fault. So, he continues to throw shade on Jerome Powell.

Maybe even more important, at 2%, the Fed doesn’t have a lot of room to cut rates if the economy really does begin to fall. If they waste a rate cut now when it’s not necessary, it could make things worse when it is necessary.

So, I hope at the next FOMC meeting, Powell shows some backbone and just tells the president and the market that all the economic signs look good and he’s not going to cut rates just to make the president feel better.

If the president wants the economy saved, the trade war will have to end. And he’s the only one who can do it.