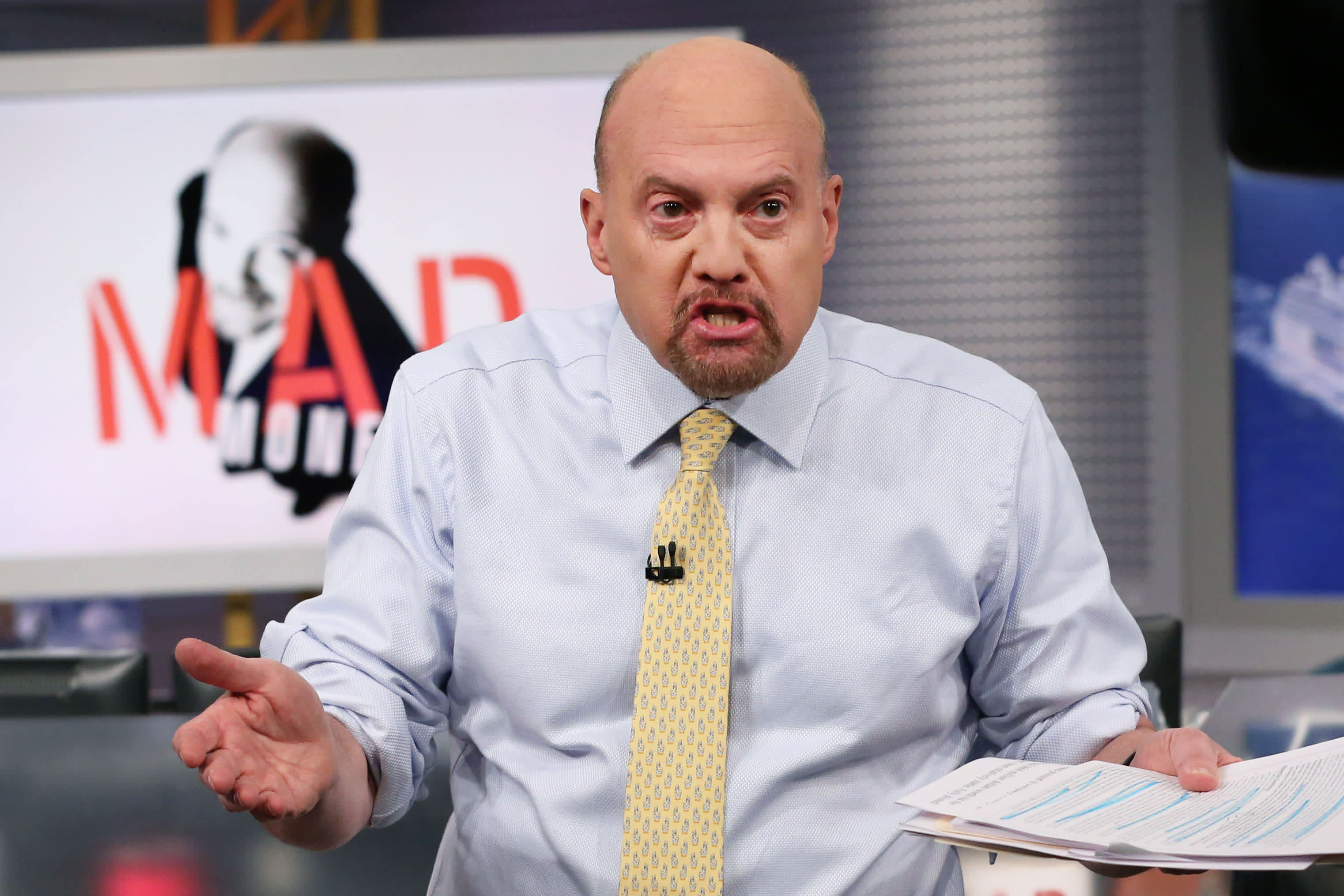 Don’t game the rotation, buy the stocks of high-quality companies

Traders work on the floor of the New York Stock Exchange on March 22, 2019.

Consistently growing stocks are out and cyclical stocks are officially back in on the market as big fund investors rotate holdings based on their emotion, Cramer said.

The market is a reflection of how institutional investors see the future. Cramer recommended that individual investors don’t try to game the rotation.

“I think you need to view it as an opportunity to get in, not get out,” the host said. “If a high-quality stock is down enough, like Merck was this morning, then that’s your chance to pounce.”

Traders work on the floor of the New York Stock Exchange

The migration of money from stocks to safety assets could soon reach a tipping point, Cramer said.

Gold and U.S. government bond prices have risen as many investors worry that a recession is looming. These investment instruments might not be riskier than most think as those who bought at lower prices take profit and the number of buyers whittle down, according to chart analyst Carley Garner.

“For months, investors have been moving their money into safe-haven assets like treasury bonds and gold,” the host said. “But they’ve now run up dramatically and the charts, as interpreted by the always-astute Carley Garner, suggest that it’s time for both bond prices and gold prices to come down — or perhaps come down hard.”

A pedestrian walks in front of an AT&T location in New York.

Cramer said that AT&T should work with the hedge fund that recently took a multibillion-dollar stake in the company.

Elliott Management, the same activist firm that helped improve value in eBay this year, is an organization that can spark the needed interest of big fund investors, the former hedge fund manager said.

While shares of the telco giant are up more than 31% this year, the stock is up just 3% since AT&T announced it would acquire DirecTV in May 2014, according to FactSet.

“AT&T’s a cheap stock, trading at less than 10 times next year’s earnings, 5.5% yield that I believe is safe and now, finally, thanks to Elliott, a catalyst,” Cramer said. “That’s why I think you should be buying the stock. I bet the upside is huge, even with just a little bit of improvement.”

VMware plans to lead the container movement in digital transformation

Cramer got more insight into the container movement in digital transformation in a one-on-one interview with VMware COO Sanjay Poonen. The cloud virtualization company created the virtual machine, which led to a million new jobs in that realm of infrastructure over the past two decades, Poonen said.

VMware is determined to lead in the latest trend emerging in the space, he added.

“There is a movement going on in digital transformation right now called containers and we believe it’s our birthright to own that movement because there’ll be, potentially, tens of millions of jobs among developers created on top of this virtual machine,” he continued. “In the 1950s containers completely transformed ships. VMware created the [virtual] ship and now these containers are going to allow apps to be fundamentally transformed.”

In Cramer’s lightning round, the “Mad Money” host zips through his thoughts about callers’ favorite stock picks of the day.

Planet Fitness: “It is going down pretty fast and I’ve got to tell you that I think it’s still a great secular trend, but I understand that it’s in a downturn so let’s be careful. Buy it slowly, but I do think that we’re nearing a bottom in that stock.”

: “Payment processing remains a hot industry. A lot of these stocks have given up the gains. … but this is a nice small spec that’s come down a lot.”