CNBC’s Jim Cramer gives viewers a preview of his schedule for the week ahead, with a few earnings reports and U.S.-China trade news taking center focus. The “Mad Money” host gave investors his blessing to start a position in Clorox and buy shares incrementally, but warns not to expect the stock price to rebound in the near-term. He sits down with Stitch Fix CEO Katrina Lake to understand how tariffs on Chinese imports have affected the web-based fashion retailer and, later in the show, dives into the state of real estate investment trusts and reveals some buying opportunities.

Cramer’s game plan for the trading week of Oct. 7 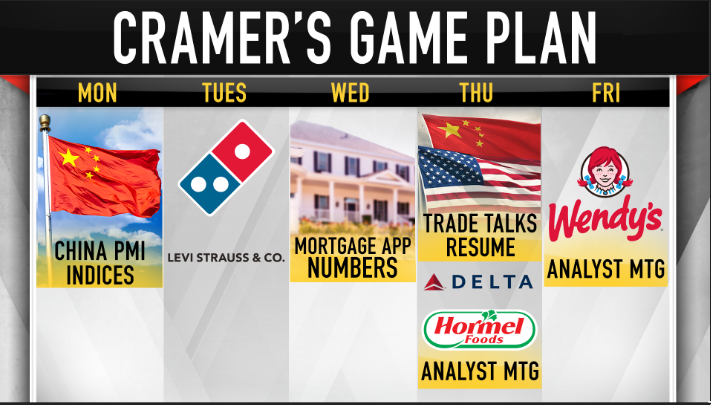 The “Mad Money” host has just three earnings reports circled on his calendar in the week ahead, along with two analyst meetings he will tune into.

He warned that the stock market has a number of headwinds coming out of Washington, D.C., to deal with, including the U.S.-China trade war, and a trade agreement with Canada and Mexico that would replace NAFTA and the Federal Reserve.

Trade officials are scheduled to resume talks later in the week, and the Chinese economy is one major focus of the host’s game plan for the trading week of Oct. 7.

“The week after next will be insane,” Cramer said. “Better batten down the hatches and get ready for companies to adjust their numbers going into a new round of tariffs that … they’re most likely unprepared for.”

Clorox gets a clean slate

Cramer is bullish about Clorox’s prospects, despite the downbeat forecast that management offered in an analyst meeting earlier this week.

Clorox revealed at the Tuesday event that it cut earnings and sales estimates for the 2020 fiscal year, but the “Mad Money” host thinks the share price is on its way higher because it’s a stock that can work in a volatile market.

“In spite of that unexpectedly downbeat analyst day, I think this is the time to start buying Clorox. Although I wouldn’t buy it all at once,” Cramer said, framing the meeting as “a cleansing moment where management resets expectations … by getting all the potential negatives out in front of you.”

Stitch Fix has been able to avoid being affected by the trade dispute between the United States and China, but the online styling service may face some headwinds in the future.

President Donald Trump has had duties in place on billions of dollars worth of Chinese imports, many for more than a year, and more are expected to go into effect on Dec. 15.

“Tariffs that we’ve had to date don’t impact us,” Stitch Fix CEO Katrina Lake told Cramer in an interview. “The ones that are being contemplated now potentially could.”

Shares of a various of real estate investment trust have been rallying, but Cramer cautioned that investors must take care in the picks they get behind.

“You have to be careful to avoid the pitfalls because some of these names, like the mall owners, are total houses of pain,” he said. “As for the biggest winners, they’re trading more like growth stocks than REITs, which, by the way, is fine by me.”

In Cramer’s lightning round, the “Mad Money” host gives callers his thoughts about their favorite stock picks in rapid speed.

Nike: “I think it goes higher, why? Because they had one of the best quarters that I have seen in ages. And my congratulations to [CEO] Mark Parker, who will not come on this show and it’s beginning to really break my heart.”

Huami Corp.: “There’s only one device company in the whole wide world that’s worth owning and that is Apple. So, even though I know your stock is very low dollar amount, Apple is a better buy.”

Is Delaying Social Security Benefits Still A Good Deal?
Survey Finds That Service Members, Veterans Are Optimistic About Home Buying In 2023
IMF’s Georgieva and ECB’s Lagarde discuss the future of global growth at Davos
Intel shares drop on weak quarterly results and expectations for another quarter of losses
As interest rates climb, here’s why proposed caps on debt may not help reduce costs for consumers