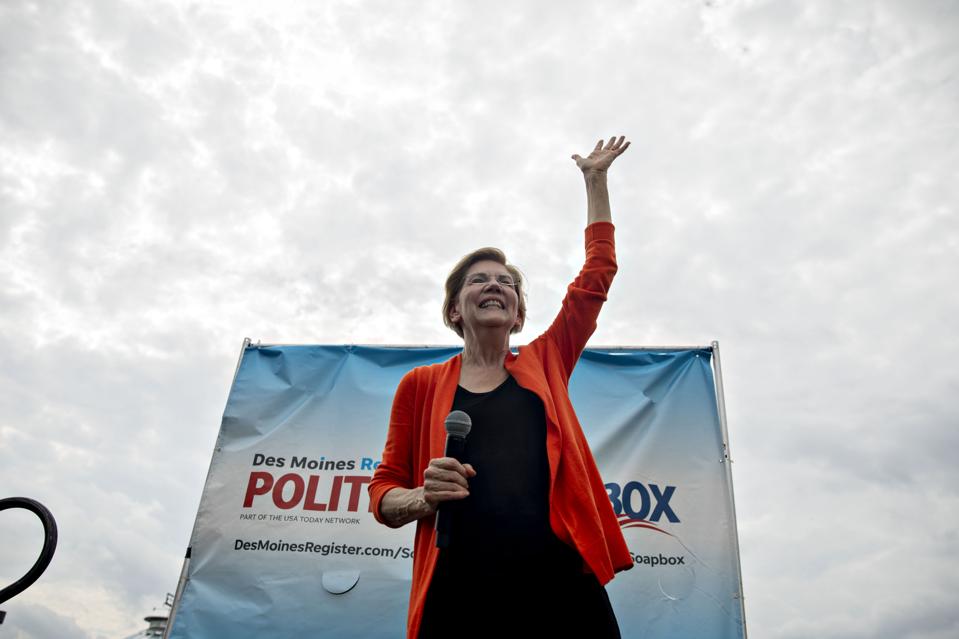 It may seem as if Elizabeth Warren, like Bernie Sanders, has been in Congress for ages, but, in fact, while Bernie was a Representative beginning in 1991 and in the Senate starting in 2007, Elizabeth Warren was only elected in 2012 – and this was her first turn at elective office, so her first “official” stand on retirement policy comes in the form of a floor speech in November of 2013.

Here’s what she said:

“A generation ago, middle-class families were able to put away enough money during their working years to make it through their later years with dignity. On average, they saved about 11% of their take home pay while working. . . .

“And just as they need to rely more than ever on pensions, employers are withdrawing from their traditional role in helping provide a secure retirement. Two decades ago, more than a third of all private sector workers – 35% – had traditional, defined benefit pensions – pensions that guaranteed a certain monthly payment that retirees knew they could depend on. Today, that number has been cut in half — only 18% of private sector workers have defined benefit pensions. Employers have replaced guaranteed retirement income with savings plans, like 401(k) plans, that leave the retiree at the mercy of a market that rises and falls, and, sometimes, at the mercy of dangerous investment products.”

After calling for an unspecified boost to Social Security, she said:

“Social Security isn’t the answer to all of our retirement problems. We need to find ways to tackle the financial squeeze that is crushing our families. We need to help families start saving again. We need to make sure that more workers have access to better pensions.”

But precisely what was her objective? A year and a half later, she won praise at Mother Jones for shifting the debate from resolving the looming Trust Fund depletion to promoting expanding benefits, in “How Elizabeth Warren Made Expanding Social Security Cool,” by Pema Levy. Citing the decline in private-sector defined benefit plan sponsorship and rejecting retirement accounts as an alternative, Levy writes,

But what does Warren believe? What did she mean, in 2013, when she said she wants to “make sure that more workers have access to better pensions”?

Before she entered the Senate, before she made a name for herself in Consumer Protection, Elizabeth Warren was a professor at Harvard Law School specializing in bankrputcy, and as such an expert, was featured in an interview on Frontline in February 2006 talking about pensions. She criticizes elements of pension funding law such as the “credit balance” concept, that, if an employer makes contributions to the fund that exceed, in any given year, the statutory requirements, it could offset future contributions by that amount. (This was prior to the considerable reforms in the 2006 Pension Protection Act.) She complains about treatment of pension plans in cases of bankruptcy and talks about airline and steel industry pensions. And when the interviewer referred to the “defined lifetime pension plan” as an “experiment” she made it clear where she thought the blame should be placed:

“[I]t’s not gone because of natural forces. It’s gone because Congress wrote a series of laws that killed it off. It’s taken 30 years from … the bankruptcy laws and the ERISA laws, but the combination will get rid of the defined benefit pension plan. It will be gone.”

Now, regular readers will know where I stand on employer-sponsored pensions: however nice a benefit they were, it was simply unrealistic to expect employers to be able to maintain these in the face of rising life expectancy, declining corporate bond rates (boosting pension liabilities), and the reality that even large corporations can’t be expected to live on forever. (See my “Elegy For The Pension Plan” and “Sears’ Bankruptcy, The PBGC’s Debt And Your Retirement.”) It simply makes no sense to expect that employers can be in the business of acting as insurance companies, that is, as lifetime income providers.

The Other Elizabeth Warren

But that’s the political Elizabeth Warren. There was another Elizabeth Warren, who in 2003 wrote a book with her daughter Amelia Warren Tyagi, The Two-Income Trap, Why Middle-Class Mothers & Fathers Are Going Broke (With Surprising Solutions That Will Change Our Children’s Futures), and in this book, she blamed the growing cost of housing, in part, on a “bidding war” by middle-class families for homes in desirable school districts, and, hard as it may be to believe now, proposed a voucher program so that families were not obliged to send their children to a school dictated by the catchment district. (Incidentally, the campaign claims it to be false that she supported “private school vouchers,” and it’s true that she calls for a “public school voucher program” in part because she seems to be thinking of the pricy $30,000 – $40,00 schools and think that a private school voucher would merely subsidize wealthy parents and drain money from public schools with fixed overhead costs. But that’s neither here nor there.)

What’s more relevant for our purposes is that in 2005 the mother-daughter pair wrote a follow-up book giving advice directly to Americans seeking to get their finances under control: All Your Worth, The Ultimate Lifetime Money Plan. The fundamental premise of the book is to get your big-ticket spending under control rather than worrying about the small splurges: shop carefully for expenses such as insurance, buy a cheap used car, look for the best mortgage deal you can find, get rid of rentals (furniture, appliances) and buy used with cash, comparison-shop for childcare rather than believing the most expensive facility is the best, and, if these actions aren’t enough to get your finances under control, move to a cheaper home.

They offer a formula: the Balanced Money Formula, with 50% for must-haves, 30% for wants, and 20% for savings. Yes, Warren, in 2005, believed that following her recommendations, a middle-class family could save 20% of its income – of which 10% should be directed to retirement savings.

“You know that you need to save for retirement, but the reality isn’t as tough as you might think. In fact, there is some good news. The government gives you a pile of tax breaks to help you save for retirement. And you have years and years for your retirement account to grow, which means that a little Savings goes a long way.

How to do it? If your company offers a retirement plan, contribute. If not, open an IRA, which is “easy to set up.” Either way, choose an index fund, and ask for one to be added to the options if that’s not already available at work. And if the stock market crashes, sit tight: “you have years and years before you’ll need that money, which means there are years and years for the stock market to turn around” (p. 188).

The bottom line: yes, there would surely still be many ways in which I would disagree with the Elizabeth Warren of 2005. But I suspect that if I could go back in time and capture this version of her, I’d find a lot more common ground.