Shares of the streaming video giant turned negative for the year this week, prompting many Wall Street analysts including KeyBanc and Pivotal to sound the alarm on Netflix’s future. Credit Suisse on Wednesday slashed its forecast for Netflix’s third-quarter earnings to “in line-to-below guidance” from “in line-to-ahead of guidance,” citing soft app downloads in recent weeks.

“While July and the first few weeks of August looked like Netflix subscriber growth trends had rebounded from 2Q based on our analysis of Sensor Tower first time Netflix app downloads globally, the last 3 weeks (through September 16th) have been relatively soft,” Credit Suisse analyst Douglas Mitchelson said in a note on Wednesday. 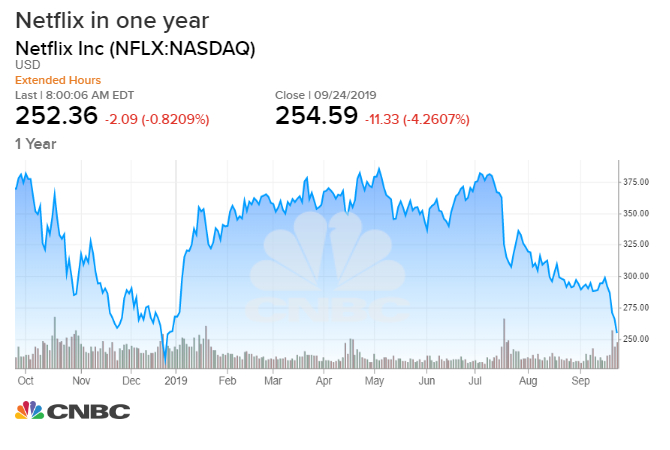 Netflix took a huge hit in July when it reported a rare loss in U.S. subscribers and a large miss on international subscriber adds in the second quarter. The ramped-up competition in the streaming space and pricing pressure also weighed heavily on the stock.

Shares of Netflix slipped another 0.8% in premarket on Wednesday. Netflix shares dropped 4.26% Tuesday to its lowest level since December. Tuesday’s decline brought Netflix’s 2019 loss to 4.8%. At one point this year, Netflix was up 46% for 2019.

Credit Suisse said Netflix’s global app downloads were up 20% in the third quarter three weeks ago, but now they are only up 6% year over tear. There’s also a 1% decline in India “oddly” despite the launch of mobile in the region this quarter and a strong local content release slate, Mitchelso said.

Netflix is set to report its third-quarter earnings on Oct.16.

Pivotal on Tuesday cut its price target on Netflix shares by nearly a third from $515 to $350, warning investors of higher-than-expected costs to license content, as well as intense competition. KeyBanc echoed the concern, saying that “even good results are unlikely to address competitive fear.”