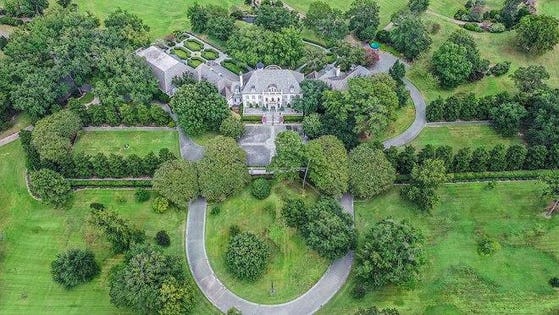 For an estate as big as Cluckingham Palace, this may surprise you: Clayton Pilgrim says his favorite room in his grandparents’ home is actually not the home theater. Or the indoor swimming pool that was modeled after the pool and spa at the Greenbrier.

“My grandfather’s office is my favorite room in that entire house,” says Clayton, a Texas realtor specializing in farm and ranch properties. One of Lonnie “Bo” Pilgrim’s six grandchildren, Clayton Pilgrim is supervising the October 15-18 no-reserve auction of his grandparents elaborate East Texas estate, affectionately known as “Cluckingham Palace.”

The estate sits on 43 acres right on the main road of Pittsburg, South Greer Boulevard. The estate almost has to be seen to be fully appreciated. The town of Pittsburgh, population about 4500, while best known as Pilgrim’s home, is also the home of racing legend Carroll Shelby and the birthplace of James R. Cavender’s Boot City. It was named after William Harrison Pitts. The Pilgrim’s extreme philanthropy is abundant, from the bell tower in the town square to the local hospital.

Pilgrim’s 18,327 square foot mansion has six bedrooms, ten and a half baths, exercise room, formals, quarters, media room, and chickens etched in every corner. There’s also that huge indoor swimming pool and spa, more of a natatorium. The grounds include trails, smooth green fields beckoning a soccer game or a polo hunt, and a pond loaded with fish. The acreage is easily navigated in a golf cart.

But for Clayton, that sprawling office next to his grandparents’ master suite, is home to his best family memories.

“That office is where “Daddy Bo” Pilgrim worked, and he really worked all the time,” says Clayton. Bo Pilgrim liked tending his chicken and banking businesses in that great big office right, says Clayton. “And that’s where I have had some really great business talks.”

The office also holds a life-sized portrait of Bo Pilgrim’s bride, Patty R. Pilgrim, to whom he was married for 61 years. Bo Pilgrim was great friends with the late T. Boone Pickens and Dallas Cowboys owner Jerry Jones. But unlike them, Pilgrim was a one-woman man.

“He just didn’t have that itch,” says Clayton.

The legendary Lonnie “Bo” Pilgrim became a billionaire off chickens. Born in Pine, Texas on May 8, 1928, he was the fourth of seven children and was called Bo by relatives. His father owned one of the only two stores in the east Texas town. Bo’s older brother, Aubrey, bought the feed store in Pittsburg, Texas, which was the beginning of their empire. When Bo joined his brother in the store, business expanded dramatically. Then Bo was drafted into the Army, sent to California during World War II. He returned to Pittsburg in 1946, determined to grow and expand the feed business into processed and prepared chicken products and egg production. As a result, the company grew into a poultry products powerhouse, supplying chickens to everyone from Kentucky Fried Chicken to Walmart to Wendy’s. At its height, the company had operations in 17 states and Mexico.

“He came from zero,” says Clayton Pilgrim. “When he built that house, it was his pinnacle moment. He didn’t have a Ferrari. He grew up in a small rural home very poor, very rural, so the home was his ability to build that legacy.”

Chateau de Pilgrim is how the home was christened, reflecting on its French Baroque design by Dallas architect Richard Drummond Davis, a Princeton-trained architect who has designed homes for a number of Texas notables.

“They built it while in their sixties, and they enjoyed it until they passed,” says Clayton.

Clayton says his earliest memories of the house was the construction phase. Prior to Cluckingham, the Pilgrims lived in a relatively modest 1965-era home on three acres lot nice 5000 square foot home about three houses down from Cluckingham.

“That house was the one time in my grandparents’ life they got to do a very big, fancy thing,” says Clayton. “And talk about well built: the place is indestructible. Bo tended to overbuild: if it called for a 2-by-4,  he’d use a 2-by-6 or 8”.

Steve Thornton was the home builder, Naud Burnett Landscape Architects created the vast landscape architectural design of the property in 1992.

Clayton’s earliest Cluckingham memories include going when he was about six to see the progress, never realizing the monstrous size of the home.

“Everyone in the family has their own take on the house — every holiday there, a few weddings. Growing up, I never realized the architectural detail in that house,” he says. “It was built in 1992. Building a similar new home today would be astronomical in cost, especially with the trees and city utilities.”

Plus few could afford to chisel out all the chickens etched in the wood ceiling moldings, the kitchen and laundry room tiles. The home is well located in Pittsburg, and only five minutes from the air strip at Mt. Pleasant, where the Pilgrims kept a company and personal jet. That’s where Patty Pilgrim would go shopping, taking their King Air 350 to Dallas. Mrs. Pilgrim could be at NorthPark Mall in Dallas in 30 minutes.

“Bo designed the home to be centralized to any one of the Pilgrim’s Pride complexes in the south via private plane in a couple hours,” says Clayton. “That’s very applicable to any CEO looking to live in the country but be accessible.”

Bo’s chief hobby, says Clayton, was business. His grandmother was a prolific ceramics artist. Bo was, however, an avid Dallas Cowboys fan and Clayton remembers watching many a game in that big upstairs media room.

“Me and dad would go over and watch football with Bo, he’d have a cold Miller Light every now and then,” says Clayton. “He was a guy who would go to New York City to talk to investment bankers in a suit, then fly back to Texas to get in the pit of the feed mills to repair an elevator leg.”

He drove a truck and loaded feed, did it all, says Clayton.

And Bo Pilgrim invested in real estate, passing the land bug onto his grandson.

“Most guys go get themselves a pair of cowboy boots and say they are in the real estate ranch business,” says Clayton. “I’m more like Bo. I got into this living and working on ranches, laying fence, draining tanks, and sweating. Kind of like my grandfather.”

64% of Americans are living paycheck to paycheck — here’s how to keep your budget in check
A Luxury Lodge Beckons Along The Unspoiled New Zealand Coastline
Tax credits vs. tax deductions: How they differ, and what to know before you file
The Fed Is Poised To Hike Interest Rates Again – Is It Enough To Keep Away A Recession?
White House approves 16 million people for contested student loan forgiveness plan. Whether they see relief depends on Supreme Court decision