This photo taken on July 19, 2018 shows a worker loading sacks of animal feed made from soybeans at the Hopefull Grain and Oil Group in Sanhe, in China’s northern Hebei province. The company is currently using soybeans imported from Brazil, after recently changing from U.S. soybeans.

In just 40 years, China has grown to become the world’s largest buyer of a number of commodities — from soybeans to copper.

“China’s influence across global commodity markets is without parallel,” said Wood Mackenzie, a commodities consultancy in a report earlier this year.

China’s appetite for commodities has grown since the country’s economic reforms in 1978, tracking its rise to become the world’s second-largest economy.

Demand for raw materials like copper and steel have been largely driven by the country’s manufacturing and construction boom, as well as by the needs of its 1.4 billion population.

As Beijing commemorates the 70th anniversary of Communist China on Oct. 1 this year, there are looming concerns the country’s trade war with the U.S. could hurt the prices of commodities amid an expected global slowdown.

While trade tensions will continue to impact the markets, the medium-term outlook for various commodities will still see China being a major buyer even though the country’s economic growth is expected to moderate, said analysts. Trends such as shifts to cleaner energy will also help shape the sector.

These four charts show how much Chinese demand for various commodities has grown.

Soybeans are among the the most politically sensitive commodities flowing into China as it is the world’s largest importer of the oilseeds and accounts for 60% of U.S. exports.

China’s soybean consumption has grown more than 12 times in the last 40 years or so. As a percentage of world demand, China now accounts for 30% of global consumption in soybeans. The oilseed is used to make cooking oil and animal feed. 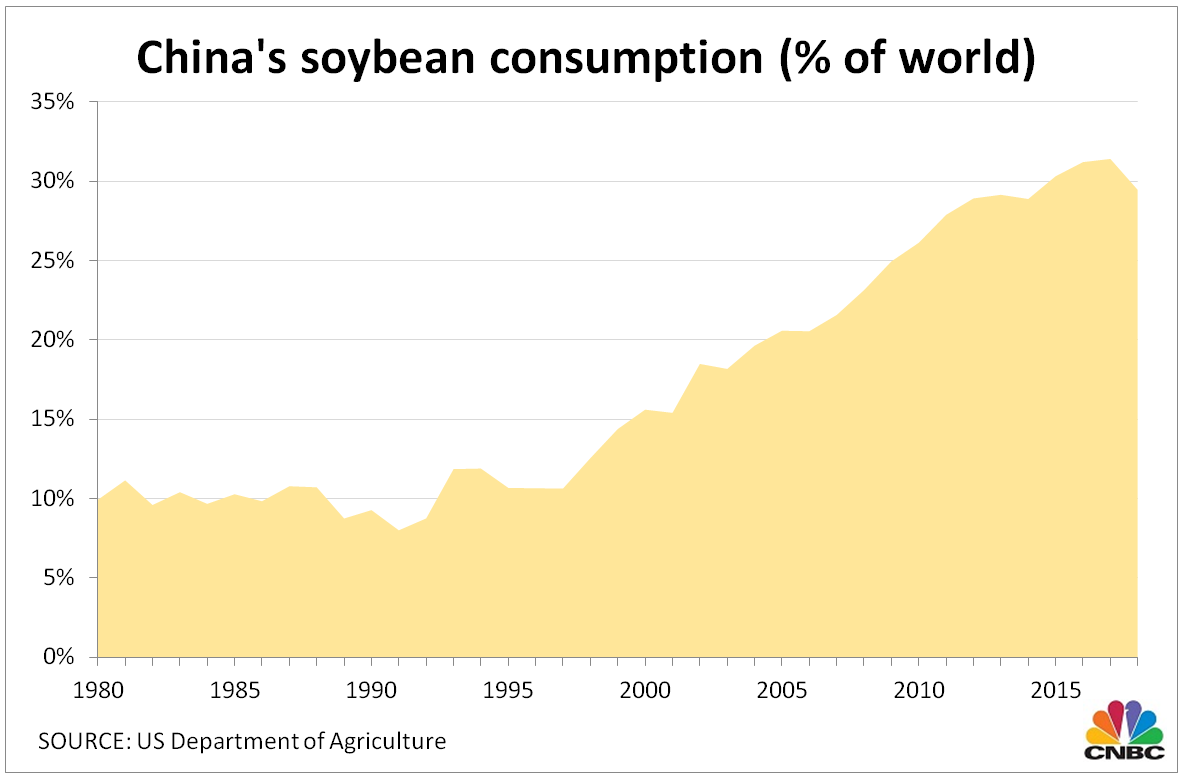 The red metal is used for a wide range of applications in engineering and construction, and is often viewed as a reliable indicator of global economic health.

The country now accounts for about half of the world’s copper demand — up sharply from under 10% in the 1980s. 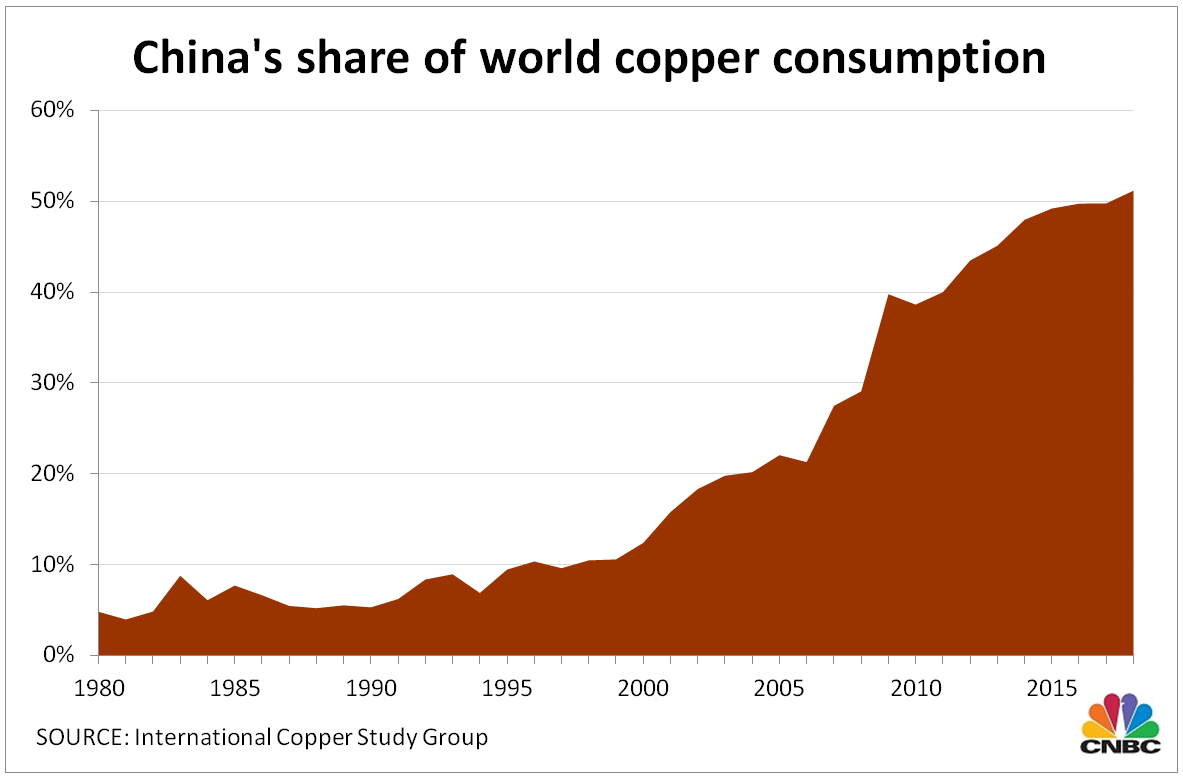 China’s demand for steel has surged in the last 40 years amid rapid industrialization. The versatile metal is used for a wide range of sectors including construction, shipbuilding and car-making. 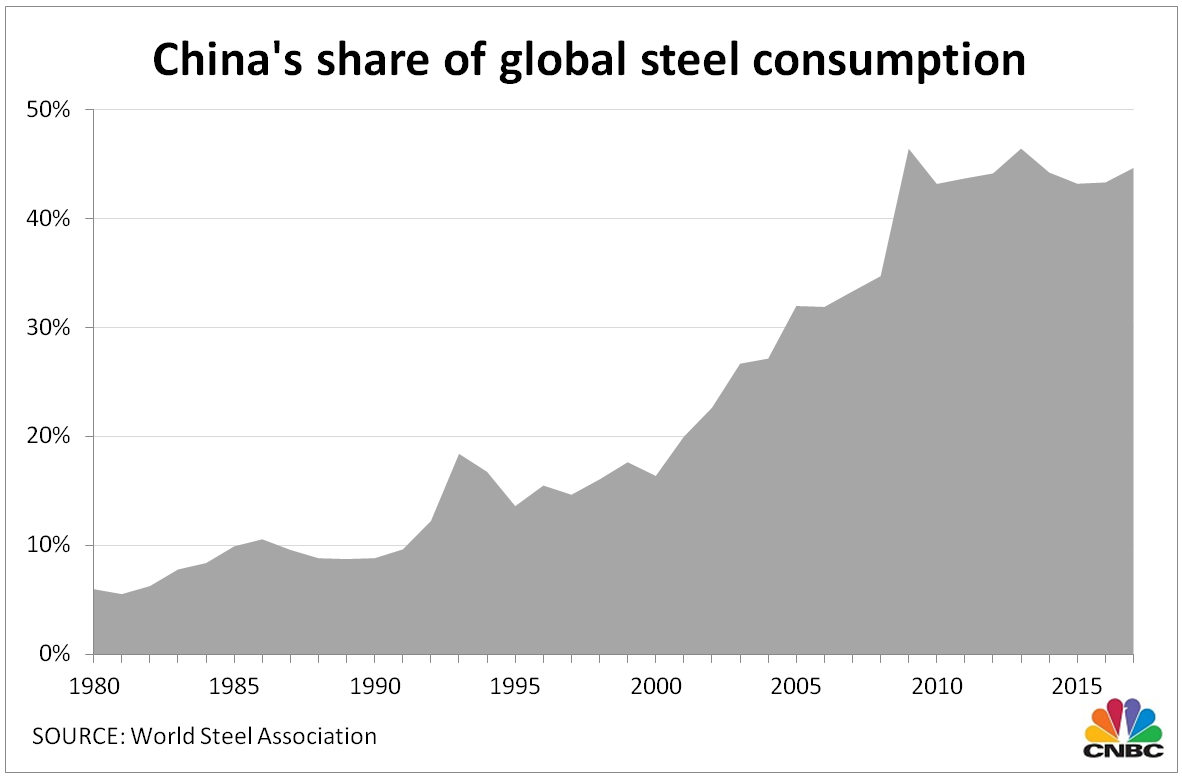 China’s demand for oil may not be as significant as its consumption for steel and copper, but the Asian giant is still one of the world’s top energy consumers and the world’s largest crude oil importer, and accounted for around 14% of global consumption in 2018. 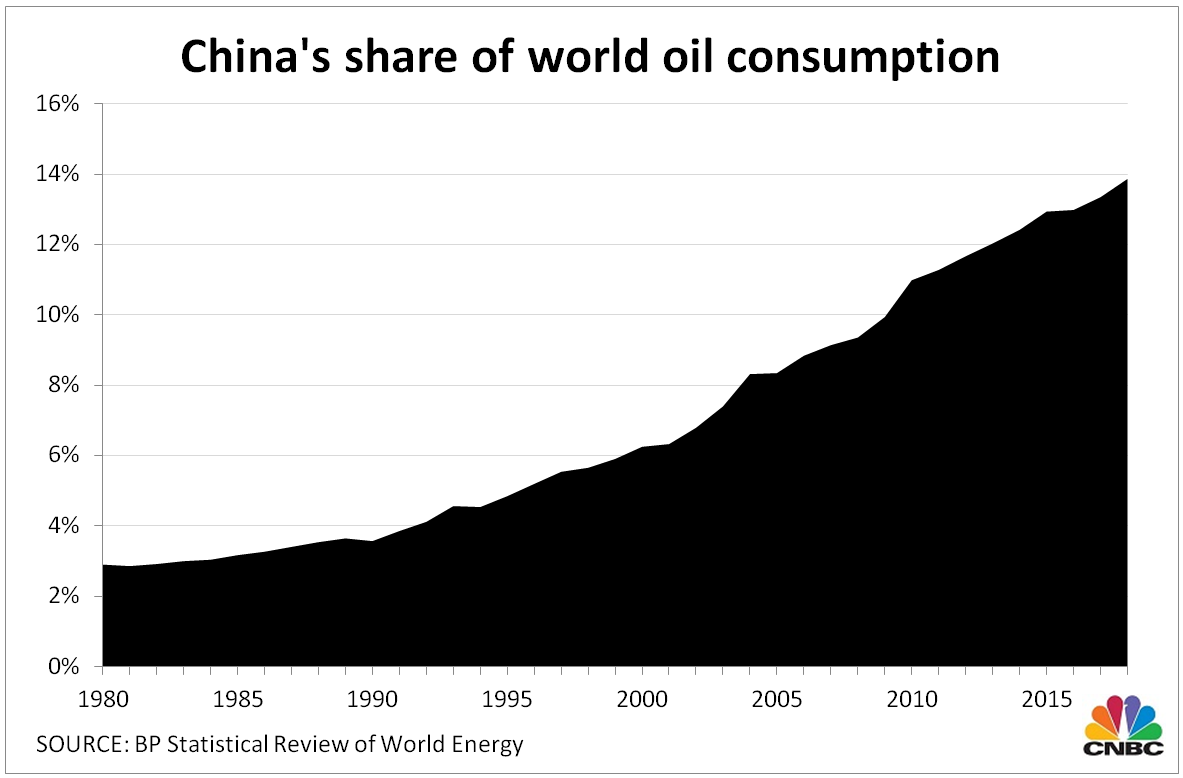 Despite being the largest buyer of many commodities, Chinese traders frequently complain they don’t have the power to set prices.

In the last few years, Chinese commodity exchanges and brokerages have set up offshore operations to better serve clients outside China.

The Asia Pacific Exchange is China’s first offshore exchange. Launched in Singapore last year, it offers new commodities futures contracts in fuel oil and palm olein — or the liquid component of palm oil — that can be physically settled.

CEO Eugene Zhu told CNBC at the launch last year that the bourse aims to provide better price discovery so that the Chinese can become price setters instead of price-takers for various commodities.

Chinese brokerages, such as Haitong International Securities and Yongan, are also competing with other global players in the space.

A more direct route of security commodities for future usage is through the purchase of assets like plantations and mines.

But there are restrictions in some countries on land acquisitions by foreign firms. As a result, some of the purchases were made through joint ventures or other partnership with local owners.

China’s massive infrastructure project — the Belt and Road Initiative spanning many resource-rich countries across Europe and Asia — will also promote trade between China and countries such as Ukraine along the route. Some of that trade includes important suppliers of grains, said research house Fitch Solutions.

“The country has been diversifying its agricultural suppliers over recent years, and we expect this trend to gain pace amidst rising import volumes,” said Fitch Solutions in a report about agricultural reforms in China.